Another reason to hit the gym! Regular exercise can slash your risk of developing ANXIETY by around 60%, study finds

You may want to start exercising if you want to cut back on your anxiety levels, a new study suggests.

Swedish researchers compared people who engaged in long-distance cross-country skiing as a form of exercise with non-skiing members of the general population.

The authors found the activity cut the risk of developing anxiety disorders by around 60 per cent overall in men and women.

While the study specifically looked at skiing, any forms of exercise are likely to slash anxiety – but the experts don’t know exactly how.

Anxiety disorders – which typically develop early in a person’s life – are estimated to affect approximately 10 per cent of the world’s population. They’re also twice as common in women compared to men. 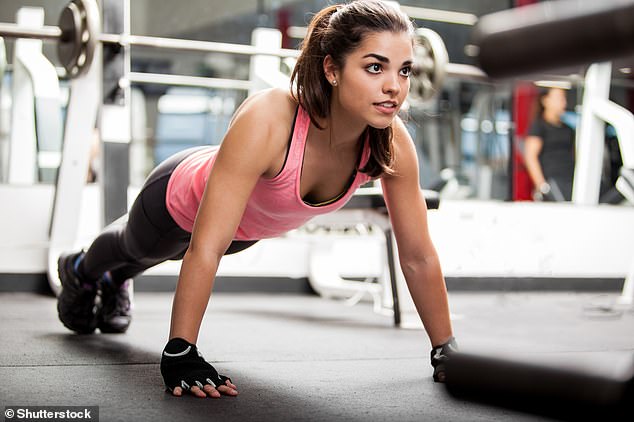 People with a physically active lifestyle had an almost 60 per cent lower risk of developing anxiety disorders over a follow-up period of up to 21 years. The study suggests may want to start exercising if you want to cut back on your anxiety levels (stock image)

Anxiety is a normal part of life that affects different people in different ways at different times.

Whereas stress can come and go, anxiety often persists and does not always have an obvious cause.

Along with depression, anxiety is among the most common mental-health condition in the UK, affecting 8.2million people in 2013 alone.

Around 40million adults suffer from the condition in the US every year.

Anxiety can make a person imagine things in their life are worse than they are or that they are going mad.

Although it evolved as part of the ‘fight or flight’ mechanism in our caveman days to avoid danger, anxiety can be inappropriately activated in everyday life when stress builds up.

It can have a clear cause, such as moving house or having surgery. However, sometimes little life events build up until a person is unable to cope, with anxiety then taking them by surprise.

The study has been conducted by Martina Svensson and Tomas Deierborg at the Department of Experimental Medical Science, Lund University, Sweden.

The two authors followed a total of 395,369 individuals – both skiers and non-skiers – for up to 21 years for their investigation.

‘We investigated how many of these skiers were diagnosed with anxiety disorders compared to people of the same sex and age in the general population,’ Svensson told MailOnline.

‘We found that the group with a more physically active lifestyle had an almost 60 per cent lower risk of developing anxiety disorders over a follow-up period of up to 21 years.

‘The exact number depends on the statistical model, whether or not we adjust for sex, age and education level. Mainly, it is around 58 to 62 per cent, depending on the model.

‘This association between a physically active lifestyle and a lower risk of anxiety was seen in both men and women.’

Skiers in the sample had taken part in the world’s largest long-distance cross-country ski race – Vasaloppet in Sweden – between 1989 and 2010.

The skiers only had to participate in Vasaloppet once to be included in the study sample, although many of them participated several times.

After the first time they participated, they were followed for a period of up to 21 years. Anxiety diagnoses were taken from the national patient registry.

‘Data was collected for those who participated in the ski race (and matched controls from general population) between 1989-2010,’ Svensson told MailOnline.

Performance was measured as the finishing time to complete the race, which is a proxy for a higher exercise dose, according to the authors.

Routine exercise may drastically slash your chances of getting depression – even if you are genetically at risk.

Scientists found adults who took part in four hours of exercise each week were 17 per cent less likely to develop the mental health condition.

Even as little as 30 minutes a day of physical activity may have a positive effect, Harvard University researchers discovered.

They found a noticeable difference in exercise performance level and the risk of developing anxiety between male and female skiers.

‘What surprised us the most was to discover how the physical performance in the ski race impacted the risk of future anxiety differently in physically active men and women,’ said Svensson.

‘However, the total risk of getting anxiety among these high-performing women was still lower compared to the more physically inactive women in the general population.’

For men, the finishing time of the race did not significantly impact the risk of anxiety, meanwhile.

‘It seems like both sexes benefit from being physically active, even though the optimal level may differ between men and women,’ said Svensson.

The reasons for this observed difference has to be further studied, she added.

While skiing is a very specific form of exercise, other studies investigating other forms of physical activity ‘point in the same direction’.

‘But this is most likely due to other important factors that affect mental health and which you cannot easily control in research analysis. 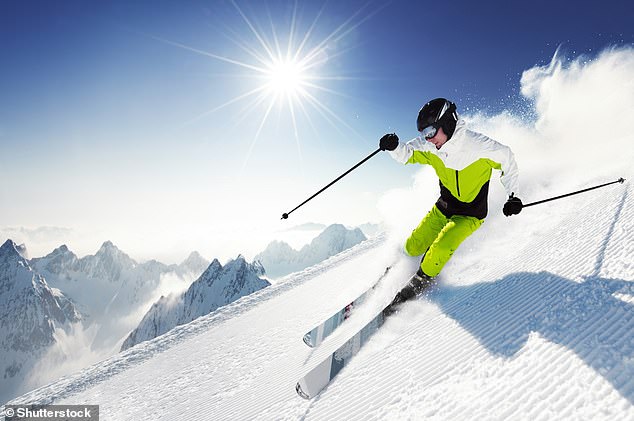 While the study specifically looked at skiing, any forms of exercise are likely to slash anxiety, the research suggests

‘Previous studies of this skiing population have confirmed that they are significantly more physically active during their leisure time and have higher fitness level compared to the general population we have as a matched (age, sex) control population.’

These findings cover relatively uncharted territory, according to the team, as most previous studies focused on depression or mental illness as opposed to specifically diagnosed anxiety disorders.

What’s more, some of the largest studies looking at this topic only included men, were much smaller in sample size, and had either limited or no follow-up data to track the long-term effects of physical activity on mental health.

The full findings have been published in the journal Frontiers in Psychiatry.

UNFIT PEOPLE ARE NEARLY TWICE AS LIKELY TO BE DEPRESSED AND ARE AT A 60% INCREASED RISK OF ANXIETY, STUDY WARNS

People with low aerobic and muscular fitness are almost twice as likely to be depressed and have a 60 per cent increased risk of anxiety, a 2020 study in BMC Medicine found.

The seven-year study of more than 150,000 Britons found a link between low physical activity and various mental health issues.

Aerobic fitness at the start of the study period was tested using a stationary bike with increasing resistance, while muscular fitness was measured with a grip strength test.

Seven years later, participants were tested once again for depression and anxiety symptoms, but researchers deliberately did not test them again for their fitness, to prevent reverse causation.

Researchers found high aerobic and muscular fitness at the start of the study was associated with better mental health seven years later.

People with the lowest combined aerobic and muscular fitness had 81 per cent higher odds of having either anxiety or depression, compared to those with high levels of overall fitness.

The researchers accounted for potentially confounding factors at baseline such as diet, socioeconomic status, chronic illness, and mental illness symptoms.

Previous studies have found that people who exercise more are less likely to experience mental illnesses.

Most studies rely on people self-reporting their activity levels, which can be less reliable than the objective physical fitness measures used for this new study.

‘Our findings suggest that encouraging people to exercise more could have extensive public health benefits, improving not only our physical health but our mental health too,’ said study author Dr Joseph Hayes at UCL.

‘Improving fitness through a combination of cardio exercise and strength and resistance training appears to be more beneficial than just focusing on aerobic or muscular fitness.’

Depression and anxiety have also been linked to increased risk of physical health problems, including a higher incidence of cardiovascular disease and early death.

cuts, exercise, regular, risk, the
You may also like:

Faces of Egyptian mummies who lived 2,797 years ago are reconstructed