The Royal Air Force has released a 360-degree video designed for virtual reality (VR) headsets that places viewers in the middle of a typical day’s action.

The six-minute-long video transports viewers under a C-130 Hercules aircraft as it soars noisily overhead moments prior to landing.

Viewers are also given an exclusive look inside the cargo bay of an RAF C-17 aircraft, taken to the scene of a serious road traffic accident and put in the middle of a chaotic counterintelligence operation.

They can also stand in the hangar of a major RAF airfield and admire the huge propellers of the 150-foot-long A400M military transport aircraft.

The RAF has also released an extra video showing the making-of the 360-degree immersive footage, which was shot on Insta360 Pro 2 and ONE R cameras.

The footage is viewable on YouTube. On desktop, users can drag the display to get a 360-degree view of the action.

But it’s best experienced with a VR headset for the full 3D visual and audio effects, the RAF says.

Viewers can use Google Cardboard – a cheap, handheld gadget from Google made from standard box material.

Google Cardboard just requires a smartphone with the YouTube app installed to be inserted, bringing the footage a few centimetres from your eyeballs.

The new footage can also be played on Oculus TV, the free app for any viewer wearing an Oculus Go headset.

Oculus Go uses internal cameras, sensors and software to track movements that are translated into corresponding motion in virtual worlds rendered in headsets.

Alternatively, the experience can be viewed on a smartphone, minus a headset at all, thanks to YouTube’s support for virtual reality videos.

Just load the video on your smartphone’s YouTube app, pick up your device and spin round 360-degrees to see the perspective change. 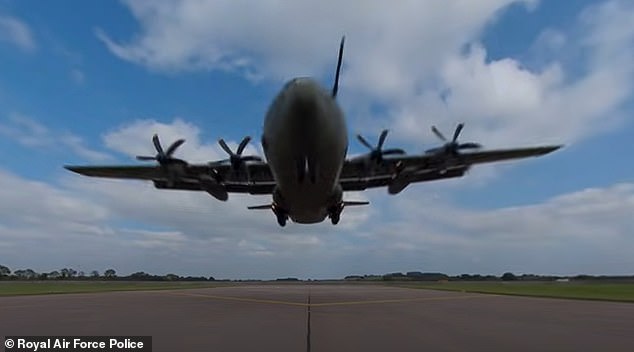 ‘You might want to mind your head for this one’: The six-minute-long video places viewers under a C-130 Hercules aircraft moments prior to landing 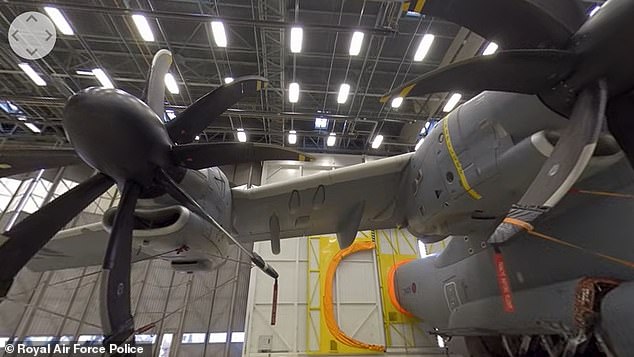 Stand below the huge propellers of the A400M, which is used by the RAF to quickly transport troops and equipment

Although the making-of video is not VR-ready, it provides an interesting look at the problems that present themselves when shooting video in VR.

Two of the figures involved in the project – RAF media specialists Tony Newton and Paul Gale – have written a piece for Redshark News detailing how they did it.

They say: ‘The brief was deceptively simple: “We want a five minute immersive video that shows what we do. You’re the media specialists, so over to you to work out how to do it.”‘

‘What became evident early on is that there are remarkably few examples of 360 video in which actors deliver scripted lines and work to choreographed actions and marks.

‘Yet this is exactly what we needed to deliver if we were to use immersive video to tell the RAF Police story.’

Google revealed its low-tech toy – a virtual reality headset made of cardboard – back in 2014.

The gadget was given out to attendees at the firm’s annual developer conference, and can also be created at home.

It uses a mobile phones as the display, with a special app to show 3D images and video.

The ‘cardboard’ gadget was passed to attendees when they left the firm’s keynote, which revealed new version of android for phones, TVs, cars and watches.

‘With your phone and a piece of Cardboard you can see some pretty amazing stuff,’ the firm said.

‘We want everyone to experience virtual reality in a simple, fun, and inexpensive way.’

‘Virtual reality has made exciting progress over the past several years,’ it continued.

The tech giant has since unveiled a funky range of designs, most of which are around the £10 mark.

Google says: ‘Whether you’re buying a pre-assembled viewer or building one from scratch, there’s almost no limit to how creative you can get with Cardboard.’

Air, Fir, force, It’s, Royal, shares
You may also like:

India's COVID-19 surge is highlighting a ruthless, global black market for oxygen, where sellers jack prices up to 1,000%

Photo shows a mass cremation of COVID-19 victims in India as the country struggles with a new surge, and people are dying waiting for help