Scientist reveals the best way to eat a Chocolate Digestive

Chocolate side up or down? Scientist reveals the best way to eat a Chocolate Digestive – and claims you should pick up the biscuit with the topping on the top, but FLIP it over before you eat it

With their crunchy biscuit base and luxurious chocolate topping, Chocolate Digestives have been favourites among biscuit lovers since they launched back in 1925.

But one question has been heavily debated about the biscuits – which way up should they be eaten?

Now, researchers from Oxford University believe they have settled the debate, and claim that you should pick up the biscuits with the chocolate side up, but flip them over before eating them.

The experts say this method allows the brain to register the chocolate coating, while flipping them before eating maximises the ‘oral-somatosensory experience’ of the chocolate melting on the tongue. 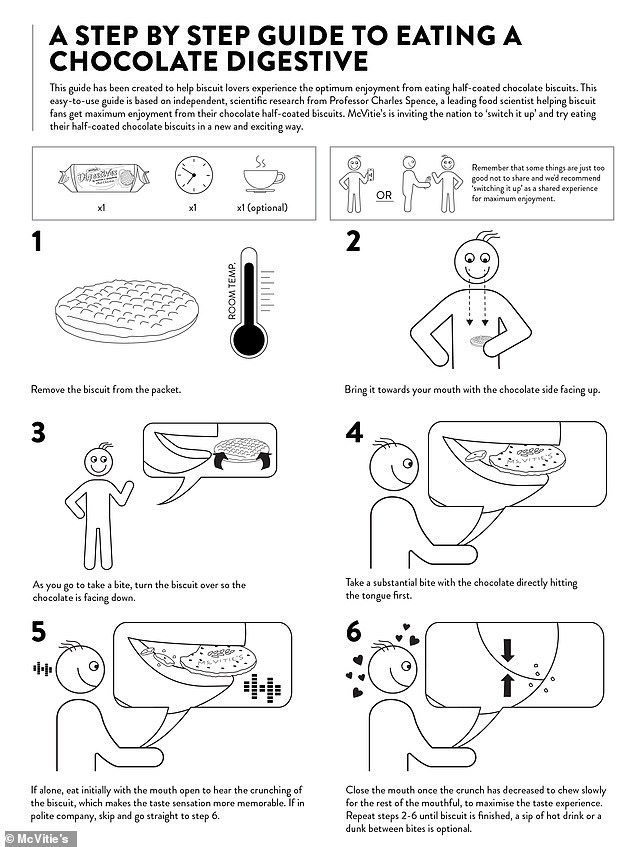 Researchers from Oxford University believe they have settled the debate, and claim that you should pick up the biscuits with the chocolate side up, but flip them over before eating them

In the study, Oxford University food scientist Professor Charles Spence analysed different ways of eating a chocolate digestive – including chocolate side up, chocolate side down, and with the winning flip.

His findings suggest that the biscuits are best enjoyed at room temperature, and when a ‘substantial bite’ is taken.

‘Which side up a half-coated chocolate biscuit should be eaten is a topic that’s been hotly debated, which is why we wanted to get to the bottom of the million dollar question,’ he said.

‘My research suggested that whilst there are merits in both ways, holding the biscuit chocolate side up first to maximise the visual experience and then switching it over as the biscuit is brought toward the mouth provides the best multi-sensory experience.’

1. Remove the biscuit from the packet at room temperature

2. Bring it towards your mouth with the chocolate side facing up

3. As you go to take a bite, turn the biscuit over so the chocolate is facing down

4. Take a substantial bite with the chocolate directly hitting the tongue first

5. If you’re by yourself, eat initially with the mouth open to hear the crunching of the biscuit which makes the taste sensation more memorable

6. Chew slowly after the first few mouthfuls to maximise the full taste experience

While the findings suggest that eating the biscuits chocolate side down results in a more delicious experience, previous research by McVitie’s shows that just 23 per cent of chocolate digestive eater actually choose to eat their snack this way.

This is largely due to the fact that people see chocolate as the topping – much like you wouldn’t eat a piece of toast with jam on the bottom.

Mark Schomberg, Head of Chocolate and Culinary Craft at McVitie’s, said: ‘There is no “right or wrong” way to eat a Chocolate Digestive, however we’ve previously confirmed that technically speaking the chocolate is on the bottom of the biscuit as that’s how it’s enrobed when they are created.’ 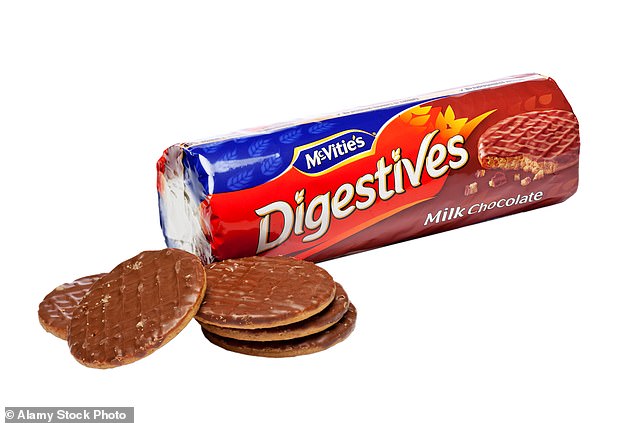 While the findings suggest that eating the biscuits chocolate side down results in a more delicious experience, previous research by McVitie’s shows that just 23 per cent of chocolate digestive eater actually choose to eat their snack this way

While it’s not the most social way to eat a biscuit, he suggests that eating with your mouth open may help to enhance the teaste.

Meanwhile, chewing slowly can also boost the flavour, so it’s best to linger over each mouthful, according to Professor Spence.

IS CHOCOLATE GOOD FOR YOU?

Chocolate is undoubtedly the nation’s favourite dietary vice but lots of research over the years has found that it could actually be good for us.

With more than 300 chemicals in chocolate, scientists are investigating a whole range of health benefits linked to the food.

Researchers at Harvard University studied 8,000 men aged over 65 and found that those who ate modest amounts of chocolate lived almost a year longer than those who ate none.

Dr Neil Martin of the Cognition and Research Centre at Middlesex University exposed people to different smells and measured their brain activity.

The results showed that smell receptors in the nasal passages reacted so strongly to the chemical mix in chocolate that it left people on an emotional high.

A 100g bar of dark chocolate gives you 2.4mg of iron and 90mg of magnesium, around one third of the recommended daily amounts.

White chocolate, on the other hand, contains no cocoa solids, just cocoa butter, and is relatively high in fat. A 100g white Toblerone bar has a whopping 540 calories and 30.7g of fat.

Yet, despite its sugar content, chocolate is said by dentists to be less damaging to the teeth than many other sweets because it tends to be chewed quickly, not sucked.

There are also naturally-occurring tannins in chocolate that help to inhibit the growth of dental plaque.

And there is known to be a substance in all chocolate called phenylethamine (PEA), which is produced naturally by the brain and thought to increase levels of the mood-enhancing chemicals, serotonin and endorphins.

In theory, the more PEA you eat, the more amorous and aroused you feel, which is why chocolate has gained a reputation as an aphrodisiac.

A TV series on the Food Network called Food: Fact or Fiction? looks at how eating chocolate affects the brain.

Phenylethylamine stimulates the release of B-endorphin which stokes the production of dopamine and norepinephrine.

These chemicals flood your system when you’re feeling loving.

Theobromine is chemically similar to caffeine and like its chemical cousin it stimulates the central nervous system and also has mood enhancing effects.

best, reveals, scientist, the, Way
You may also like: