The future of recycling? Scientists develop a method to convert waste plastics into JET FUEL in less than an hour

Scientists have developed a method of converting waste plastics to ingredients for jet fuel in less than an hour, to help tackle the plastic waste crisis.

Polyethylene is the most widely used plastic in the world and is used to make shopping bags, clear food wrap and shampoo bottles, to name a few.

The polymer is found in about a third of all plastics produced, and has a global value of about $200 billion (£142 billion) annually.

Waste polymers could become valuable raw materials instead of winding up in landfills and the surrounding natural environment, like waterways. 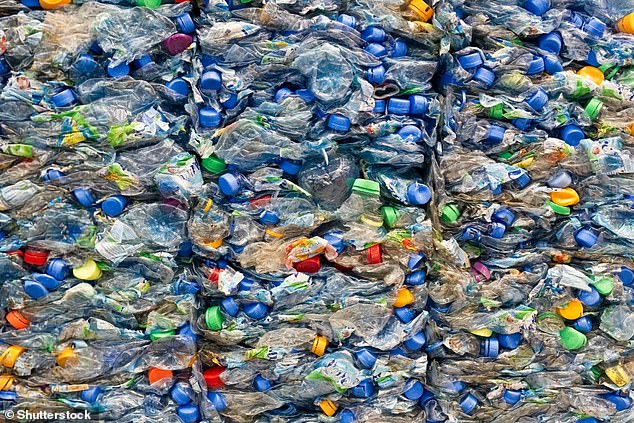 Polyethylene, also known as #1 plastic, is the most commonly used plastic, used in a huge variety of products from plastics bags, plastic milk jugs and shampoo bottles to corrosion-resistant piping, wood-plastic composite lumber and plastic furniture

Polyethylene is a thermoplastic commodity heavily used in consumer products.

More than 60 million tons of polyethylene are produced worldwide every year.

It is a polymer consisting of long chains of the monomer ethylene.

The process, detailed in the journal Chem Catalysis, uses a ruthenium on carbon catalyst and a commonly used solvent.

Other scientists have already converted single-use plastics into jet fuel, diesel and lubricant.

But the WSU researchers were able to convert about 90 per cent of the plastic to jet fuel components or other hydrocarbon products within an hour at a temperature of 428°F (220°C) – lower than temperatures typically used to convert plastics today.

Adjusting processing conditions, such as the temperature, time or amount of catalyst used, can also give the researchers the option to fine-tune the process to create desirable products, they claim.

‘Depending on the market, they can tune to what product they want to generate,’ said study author Hongfei Lin at WSU’s Gene and Linda Voiland School of Chemical Engineering and Bioengineering.

‘They have flexibility. The application of this efficient process may provide a promising approach for selectively producing high-value products from waste polyethylene.’

Although specific to polyethylene, the team also believe their process could work effectively with other types of plastics.

The most common mechanical recycling methods melt the plastic and re-mold it, but that lowers its economic value and quality for use in other products.

Chemical recycling can produce higher quality products, but it has required high reaction temperatures and a long processing time, making it too expensive and cumbersome for industries to adopt. 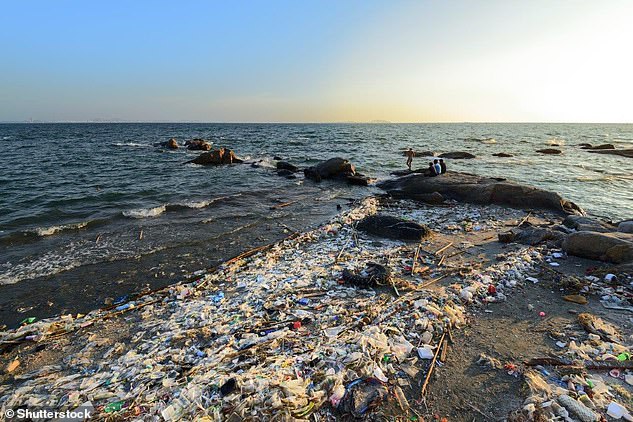 Waste polymers could become valuable raw materials instead of winding up in landfills and the surrounding natural environment, like waterways

‘In the recycling industry, the cost of recycling is key,’ said Lin. ‘This work is a milestone for us to advance this new technology to commercialisation.’

In recent decades, an accumulation of waste plastics has caused an environmental crisis, polluting oceans and pristine environments around the world.

As they degrade, tiny pieces of microplastics have been found to enter the food chain and become a potential threat to human health.

Last August, researchers from Arizona State University showed that microplastics accumulate within human organs, including the kidneys, liver and lungs.

Although the health impacts of this build-up in humans is unknown, experts have linked microplastic pollution to inflammation, infertility and cancer in animals.

WHAT CAN MICROPLASTICS DO TO THE HUMAN BODY IF THEY END UP IN OUR FOOD SUPPLY?

According to an article published in the International Journal of Environmental Research and Public Health, our understanding of the potential human health effects from exposure to microplastics ‘constitutes major knowledge gaps.’

Humans can be exposed to plastic particles via consumption of seafood and terrestrial food products, drinking water and via the air.

However, the level of human exposure, chronic toxic effect concentrations and underlying mechanisms by which microplastics elicit effects are still not well understood enough in order to make a full assessment of the risks to humans.

According to Rachel Adams, a senior lecturer in Biomedical Science at Cardiff Metropolitan University, ingesting microplastics could cause a number of potentially harmful effects, such as: