Typical hurricanes are easy to spot in satellite imagery: Swirling clouds surround a quiet eye. These storms usually form in the lowest layer of the atmosphere, closer to Earth’s surface, and unleash heavy rain and strong winds.

But according to a recent study, space hurricanes are wholly different beasts.

The research, published in the journal Nature Communications, describes the first space hurricane ever spotted. Satellites observed it in August 2014 — a swirling mass with a quiet center more than 125 miles above the North Pole.

Whereas regular hurricanes churn air, this space hurricane was an eddy of plasma, a type of super hot, charged gas found throughout the solar system. And instead of rain, this storm brought showers of electrons.

“Until now, it was uncertain that space plasma hurricanes even existed, so to prove this with such a striking observation is incredible,” Michael Lockwood, a space scientist at the University of Reading and a co-author of the new study, said in a press release.

The space hurricane was more than 620 miles wide, and high in the sky — it formed in the ionosphere layer, between 50 and 600 miles up. Lockwood and his coauthors used the satellite data to create a 3D model of the storm.

The space hurricane lasted eight hours, swirling in a counter-clockwise direction. It had several spiral arms snaking out from its center, according to the researchers, a bit like a spiral galaxy.

By plugging the satellite data into a computer model, Lockwood and his collaborators were able to reproduce the storm and figure out what caused it. The results showed that charged particles emitted by the sun’s upper atmosphere, the corona, were to blame.

This steady stream of solar particles and coronal plasma is known as solar wind; it moves at about 1 million miles per hour.

“These space hurricanes must be created by unusually large and rapid transfers of solar wind energy and charged particles into the Earth’s upper atmosphere,” Lockwood said.

As solar wind reaches Earth, it encounters the planet’s magnetic field. Earth has such a field because of the swirling liquid iron and nickel in its outer core, which gives rise to electric currents. The resulting magnetosphere protects the planet from deadly radiation from the sun but also retains a tiny layer of plasma from that solar wind. 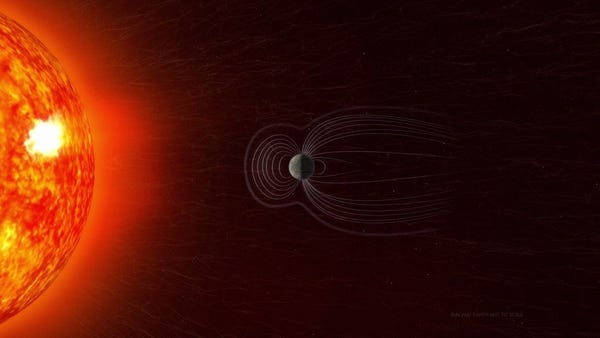 Typically, solar winds glance off this protective sheath. But sometimes, the incoming charged particles and plasma interact with either the trapped plasma or the electrical currents generating the field. Such interactions create disturbances in the magnetosphere.

The 2014 space hurricane was one such disturbance.

In particular, the study authors suggest that an interaction between the Earth’s magnetic field and bits of the sun’s magnetic field — transported on the solar wind — helped form the storm.

Usually, magnetic fields don’t mix. But if they do come close together, portions of the fields can get realigned and sometimes even merge — forming a new pattern of magnetic energy. That’s what likely happened on the day of the space storm: An influx of solar wind energy formed a new pattern above Earth’s magnetic north pole.

Once it had formed, the storm acted like a channel from space into Earth’s atmosphere — funneling some electrons down past the planet’s armor.

This particle rain could have wreaked havoc on our high-frequency radio communications, radar-detection systems, or satellite technology, according to the study authors. That’s because charged solar particles that seep through Earth’s magnetic field are known to cause malfunctions in computers and circuitry on satellites and the International Space Station. Luckily in this case, no issues were observed.

Other planets could have space hurricanes, too 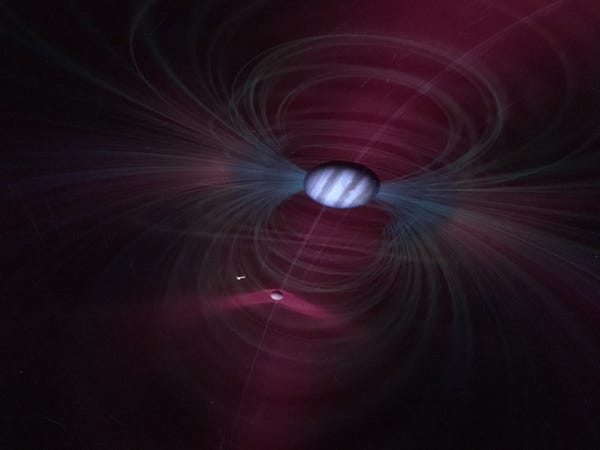 Earth isn’t the only planet to experience hurricanes: similar weather patterns occur on Mars, Saturn, and Jupiter. But this is the first time scientists have spotted a hurricane in the upper atmosphere of any planet in the solar system.

Lockwood thinks any planet or moon with a magnetosphere could experience a space hurricane, however. All planets in our solar system except Venus and Mars have those.

“Plasma and magnetic fields in the atmosphere of planets exist throughout the universe, so the findings suggest space hurricanes should be widespread phenomena,” he said.