‘Very reassuring’ study finds NO TRACES of coronavirus in air samples and swabs of London’s tubes, buses and stations

Scientists have revealed they have found ‘no traces’ of the coronavirus in the London Underground after routine analysis of samples.

Imperial College London staff are taking samples of the air and swabbing surfaces at tube stations and on tube carriages and London buses.

‘Reassuringly’ they have found no traces of the virus or any of its variants following lab tests of the samples, which are being collected once a month.

The tests look for genetic material known as ribonucleic acid (RNA) with a sequence that is specific to SARS CoV-2, the coronavirus that causes Covid-19. 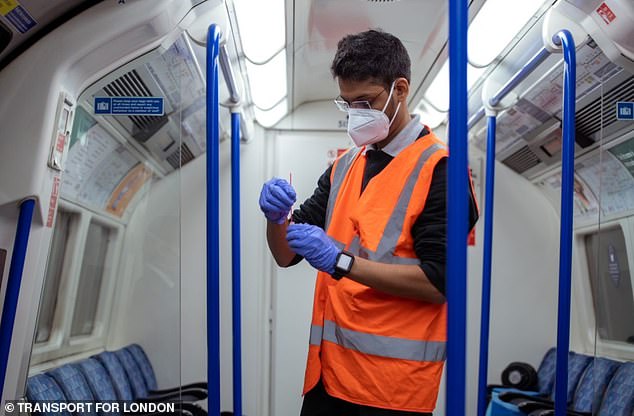 Dr David Green, senior research fellow at Imperial has been conducting testing – which covers all variants of the virus – with fellow staff in ccoperation with Transport for London (TfL).

‘We’re testing both underground and bus routes around London,’ he explained during an Imperial podcast.

‘We try to represent what people are exposed to if they’re travelling around.’

TfL called the results ‘encouraging’ and stressed that people should continue to use public transport only if they have a legally permitted reason to do so according to government advice.

Since October, researchers have been conducting their test in the third week of every month, starting at Waterloo Underground station.

The team are taking samples of the particles in the air by sucking up to 300 litres a minute into a filter. 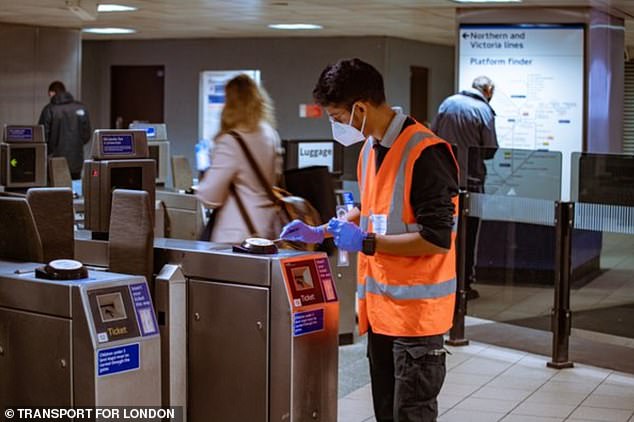 Researcher takes a swab of the Oyster reader. The initiative is targeting high-touch areas on the network 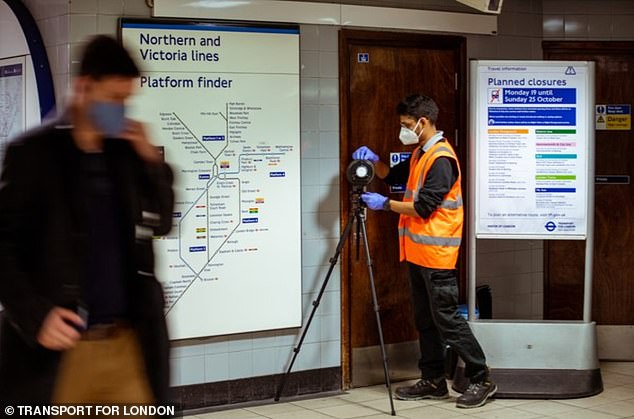 DNA – deoxyribonucleic acid – is widely known as the molecule found in the nucleus of all our cells that contains genetic information.

It is shaped like a double-helix and made of small sections called nucleotides.

Each nucleotide contains a nucleobase, a sugar, and a phosphate group.

The sugar component in this particular molecule is called deoxyribose and makes up the D in DNA.

This is a cyclic carbon-based chemical with five carbon atoms arranged as a pentagon.

At the second carbon atom there is an attached singular hydrogen atom in deoxyribose.

This can also have an additional oxygen attached as well.

In this case, the oxygenated chemical then forms what is simply known as ribose – the R in RNA.

This draws in samples of any particles of moisture in the air that may be breathed out by users of the network.

‘We use the same sort of techniques as you do with a throat swab – so we have a cotton bud that we moisten with a tissue culture, we wipe it over a surface and then seal it and take it to the lab,’ Dr Green said.

Once this is done, they get on the tube and take more samples from surfaces like handles and buttons until they reach the next station and repeat the process.

On a day’s work they take samples at two stations, on one Tube line, as well as one bus. The research team stop at Underground stations for an hour at a time.

The samples are delivered on the same day to Imperial’s Barclay Laboratory to test for gene fragments of coronavirus.

This is likely due to a combination of regular cleaning of surfaces by TfL staff with anti-viral disinfectant and generally a good adherence to the compulsory mask policy on public transport.

‘All of the results have been negative so far, which is very reassuring for everybody travelling,’ said Dr Green.

‘The cleaning of surfaces within the Underground seems to be effective in reducing traces of Covid RNA on surfaces.’

The testing shows the importance of wearing a mask on public transport, as the virus is mostly spreading though droplets in the air.

‘Back in the early stages of the pandemic everybody was worried about surface transmission,’ Dr Green said. 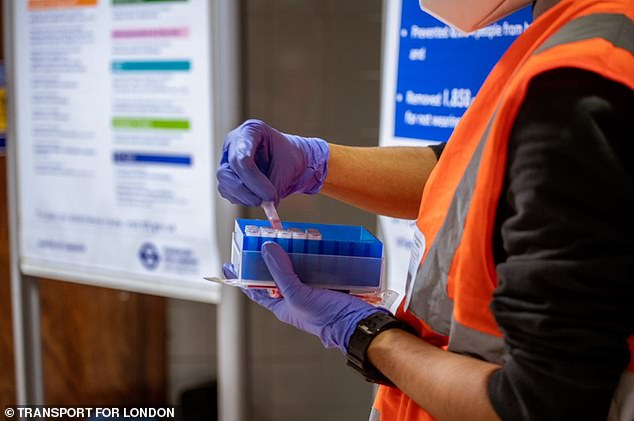 The samples are delivered on the same day to the lab of Professor Wendy Barclay. Here they are analysed using polymerase chain reaction (PCR) which rapidly amplifies a genetic material called RNA, making it possible to detect genetic sequences specific to the virus 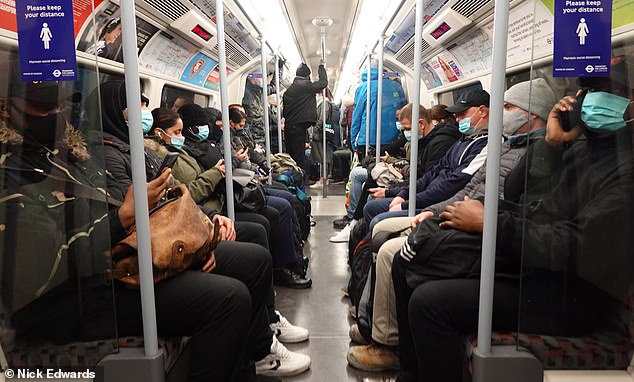 So far, none of the test have come back positive after four months. This is likely due to a combination of regular cleaning of surfaces by TfL staff with anti-viral disinfectant and generally a good adherence to the compulsory mask policy on public transport

‘Gradually as we’ve moved on we’ve understood only through super-spreader events that lots of transmission is occurring through droplets and aerosols.

‘When you see news reports of super-spreader events they tend to be either large numbers of people in big areas where they’re not wearing face coverings or they’re occurring in domestic environments where lots of people are sitting around a table talking to each other for 10 or 15 minutes.

‘That’s where you get the increase in concentrations inside that enables the virus to transmit.’

Despite the promising findings, TfL workers are still at a high risk of infection and commuters should keep wearing their face masks.

TfL revealed last month that 57 of its staff have been killed by coronavirus and one in 10 workers is absent due to sickness or self-isolation.

Some 42 bus workers have died over the course of the pandemic alongside eight Tube and rail workers, three from head office and four in partner organisations, according to the Evening Standard.

The organisation said that 3,646 of its workers are currently absent due to sickness or self-isolation. This figure makes up about 10 per cent of the workforce.

During the peak of the pandemic, eight London bus drivers died after contracting the virus in just three days.

London’s Transport Commissioner Andy Byford said: ‘I am determined we as an organisation continue to play our part in the national effort to beat coronavirus.

In December, the government’s Joint Committee on Vaccination and Immunisation (JCVI) recommended people in public-facing jobs, including transport workers, be prioritised for a coronavirus vaccine after the highest risk groups. 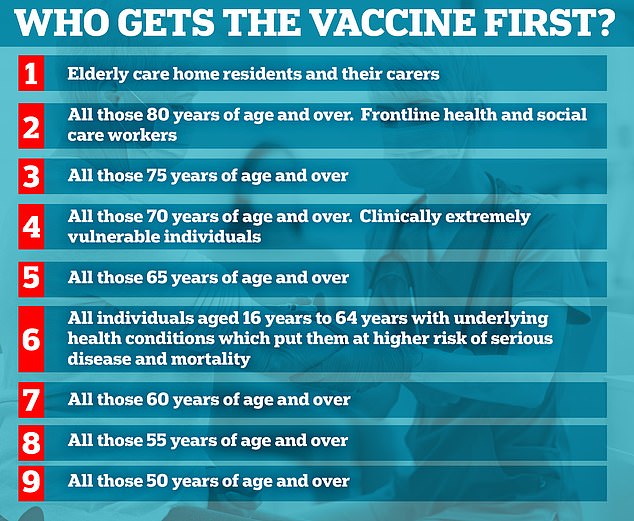 The Joint Committee on Vaccination and Immunisation (JCVI) published its vaccine priority list in December, with care homes and the NHS among the first in line

The body encouraged the government to prioritise people based on their job types once all over-50s have been immunised.

‘Vaccination of those at increased risk of exposure to SARS-CoV-2 due to their occupation could also be a priority in the next phase,’ the JCVI guidance said.

‘This could include first responders, the military, those involved in the justice system, teachers, transport workers, and public servants essential to the 10 pandemic response.’ 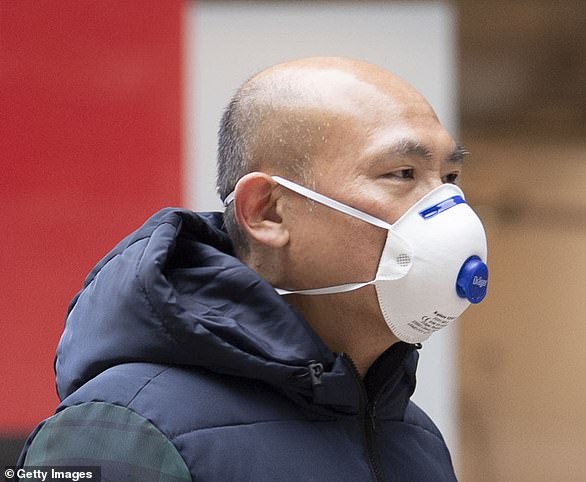 The London Mayor and Transport for London launched two reviews of the current guidance as the ‘Kent strain’ continued to spread through the UK. Pictured, high-quality masks could become the norm on public transport

Tube and bus passengers may be told to switch to higher-grade masks to guard against mutant strains of Covid-19, it has been revealed.

London Mayor Sadiq Khan and Transport for London have launched two reviews of the current guidance as the ‘Kent strain’ continued to spread through the UK.

Cloth masks and DIY bandanas are useful for lessening the spread of the virus caused by cough droplets and sneezes, but they do not stop inhalation of virus particles, reported the Evening Standard.

Other countries, including Germany and France, have already asked citizens to wear high-filtration masks to keep the spread of coronavirus at a minimum.

They are disposable, slightly more expensive and more difficult to breathe through. But they also stop 95 per cent of airborne particles – drastically reducing a passenger’s likelihood of testing positive.

A spokesman for Sadiq Khan said: ‘Germany, France and Austria have all recently introduced stricter requirements for face coverings, and it may be necessary to introduce tougher measures here to stop the spread of the new variant, particularly in poorly ventilated locations.’

The London mayor will commission an analysis of the situation from the city’s scientific advisory group on coronavirus.

TfL staff already wear a four-layer surgical mask but the advice to passengers could now change to offer them more protection.

In Germany, single-use surgical FFP1 masks or more protective FFP2 filtering respirators should be worn in the workplace, on public transport and in shops since a ruling last month.

And France banned some DIY coverings because they didn’t offer enough protection.

Tom Frieden, former director of America’s Centers for Disease Control and Prevention, said: ‘The existence of more-transmissible viruses emphasizes the importance of us upping our game and doing not more of the same but better of the same.’

5,400-year-old cranium of a young woman washed into a forming cavern

Cats are 'too socially inept' to stand with their owners, study warns