At first listen to this audio clip, you’d be forgiven for mistaking it as the soundtrack of the latest science fiction blockbuster.

But the track isn’t fiction at all, and is actually the sound of sawfly larvae secreting cocktails of unpleasant chemicals to repel predators.

Researchers from the Royal Belgian Institute of Natural Sciences have translated the secretions into eerie sounds, and tested their effect on humans.

Participants described the sounds as unpleasant and even frightening, with many comparing them to background music in horror and science fiction films. 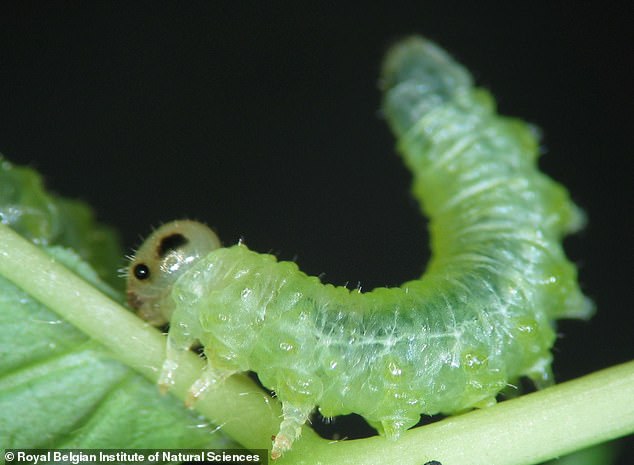 Researchers from the Royal Belgian Institute of Natural Sciences have translated the secretions of sawfly larvae (pictured) into eerie sounds, and tested their effect on humans

The team transformed the chemicals into sounds through a process known as sonification,

Characteristics of each molecule are mapped onto different sound parameters, including pitch, duration and timbre.

Chemical information is then fed into a synthesiser, which produces a sound for each molecule, before mixing them all together.

Sawfly larvae protect themselves from predators – particularly ants – by secreting an unpleasant cocktail of chemicals.

Previous studies have assessed these tactics by staging meetups, known as bioassays, between larvae and ants.

However, in the new study, researchers Jean-Luc Boeve and Rudi Giot took a slightly different, and some would say more unusual, approach.

Mr Boeve explained: ‘You have small molecules like acetic acid contained in vinegar or pungent formic acid emitted by some ants, they’re very volatile and diffuse into the air rapidly.

‘So, I thought it would be possible to translate a high or low volatility into high or low tones, as well as other chemical traits into other sound traits.’

The team transformed the chemicals into sounds through a process known as sonification, in which characteristics of each molecule are mapped onto different sound parameters, including pitch, duration and timbre.

Chemical information is then fed into a synthesiser, which produces a sound for each molecule, before mixing them all together.

‘Examples of such phenomena are earthquakes in seismologic data, or network hacking in internet data streaming.’

Once the sonification process was complete, the researchers tested the track on 50 participants.

Partcipants described the track as unpleasant and frightening, with some even comparing it music used in horror or science fiction films.

‘Interestingly, we could show that the responses by ants and humans are correlated, thus indicating that sonification can approximate the ‘real world’ of predator-prey interactions,’ Mr Boeve said.

The team hopes the method could be used alongside exisiting techniques of testing chemicals in the future – especially in cases when an insect’s seasonal availability is unfavorable or harvesting large enough quantities of its secretion is challenging.

Scientists in the US have brought the structure of a spider web to life by translating it into music – a technique that could help us communicate with spiders, they say.

They assigned different frequencies of sound to strands of the web, creating ‘notes’ that they combined in patterns, based on the web’s 3D structure, to generate melodies.

The eerie piece of music, which lasts just over a minute, sounds like the soundtrack for an eerie dystopian sci-fi horror film.

It was created by researchers at Massachusetts Institute of Technology (MIT) with  laser scanning technology and image processing tools.

The experts say spider webs could provide a new source for musical inspiration and provide a form of cross-species communication.