Lake the size of PHILADELPHIA discovered under Antarctica contains sediments that could reveal what the continent looked like before it froze over, scientists claim

Scientists investigating the underside of the world’s largest ice sheet in Antarctica have discovered a city-size lake.

The lake, called Lake Snow Eagle, lies in a mile-deep canyon in the highlands of Antarctica’s Princess Elizabeth Land, a few hundred miles from the coast.

It’s under the East Antarctic Ice Sheet, which is one of two large ice sheets in Antarctica and the largest ice sheet on the entire planet.

According to the scientists, sediments in Lake Snow Eagle might contain a history of the East Antarctic Ice Sheet since its earliest beginnings. 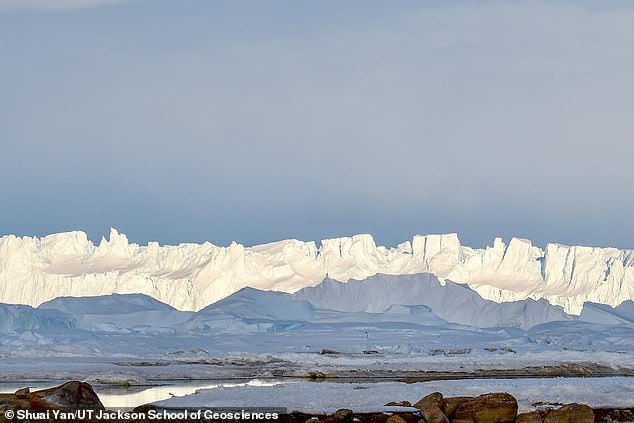 The coast of Antarctica’s Princess Elizabeth, near where the ice sheet meets the sea. Newly discovered Lake Snow Eagle lies a few hundred miles inland, under the same ice sheet 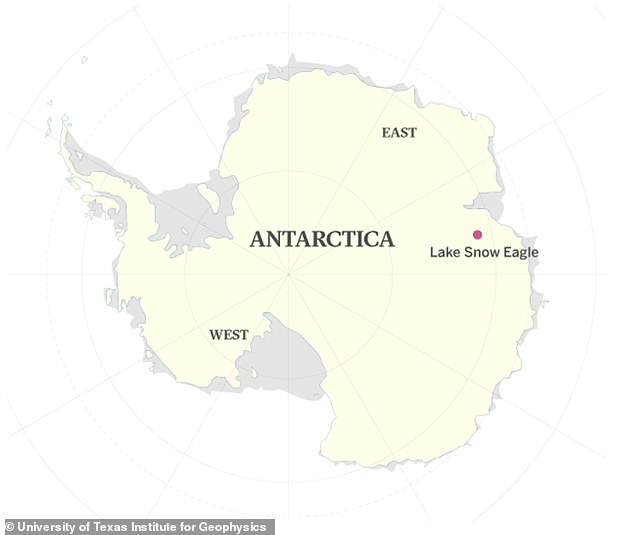 Lake Snow Eagle lies in a mile-deep canyon in the highlands of Antarctica’s Princess Elizabeth Land, a few hundred miles from the coast

WHAT IS AN ICE SHEET?

The two ice sheets on Earth today cover most of Greenland and Antarctica.

During the last ice age, ice sheets also covered much of North America and Scandinavia.

Together, the Antarctic and Greenland ice sheets contain more than 99 percent of the freshwater ice on Earth.

They could reveal what Antarctica was like before it froze, how climate change has affected it and how the ice sheet might change as the world warms.

Lake Snow Eagle, which is covered by two miles of ice, was revealed by aircraft fitted with ice-penetrating radar, which sends out radio waves and times how long it takes for them to reflect back.

‘This lake is likely to have a record of the entire history of the East Antarctic Ice Sheet, its initiation over 34 million years ago, as well as its growth and evolution across glacial cycles since then,’ said study author Don Blankenship at the University of Texas at Austin.

‘Our observations also suggest that the ice sheet changed significantly about 10,000 years ago, although we have no idea why.’

The first sign that the lake existed was when scientists spotted a smooth depression on satellite images of the ice sheet.

To confirm it was there, they spent three years flying surveys over the site with ice penetrating radar and sensors that measure minute changes in Earth’s gravity and magnetic field. Unlike ice, water reflects radar like a mirror.

‘I literally jumped when I first saw that bright radar reflection,’ said lead author Shuai Yan, also at the University of Texas at Austin.

Because it lies relatively close to the coast, researchers think that Lake Snow Eagle might contain information about how the East Antarctic Ice Sheet first began.

The sediments at the bottom of the lake are 1,000 feet deep and might include river sediments older than the ice sheet itself.

‘This lake’s been accumulating sediment over a very long time, potentially taking us through the period when Antarctica had no ice at all, to when it went into deep freeze,’ said co-author Martin Siegert, a glaciologist at Imperial College London.

‘We don’t have a single record of all those events in one place, but the sediments at the bottom of this lake could be ideal.’

Getting a sample of the lake’s sediments by drilling into it could provide vital information about the ice sheet’s possible demise from climate change.

Lake Snow Eagle, which has been named after one of the aircraft used in its discovery, is one of many features uncovered by ICECAP-2, an international collaboration.

ICECAP-2 aims to map the last unknown regions of East Antarctica by polar research teams from the US, UK, China, Australia, Brazil and India.

The study has been published today in the journal Geology.

For the first time, scientists have found a huge groundwater system below ice in Antarctica.

The reservoir of groundwater lies beneath the Whillans Ice Stream in West Antarctica, say experts in the US.

Groundwater is fresh water (from rain or melting ice and snow) that soaks into the soil and is stored in the tiny spaces (pores) between rocks and particles of soil.

Such groundwater systems are likely common in Antarctica and affect how the continent reacts to climate change – although researchers don’t know exactly how.

Groundwater may exist under similar conditions on other planets or moons that are releasing heat from their interiors, according to the team.