See the Northern Lights from SPACE! NASA astronaut shares stunning timelapse from the ISS showing an orbital pass over the aurora-draped Indian Ocean

Talk about an out of this world view — this spectacular timelapse video captures what the Northern Lights look like from space.

It was recorded by a NASA astronaut on the International Space Station and shows an orbital pass over the aurora-draped Indian Ocean.

The footage also snaps a striking view of the moon, which in turn lights up the Coral Sea east of Australia with its glint.

Auroras occur when particles from incoming solar storms strike gases in our planet’s atmosphere, with the collision often leading to these eye-catching displays. 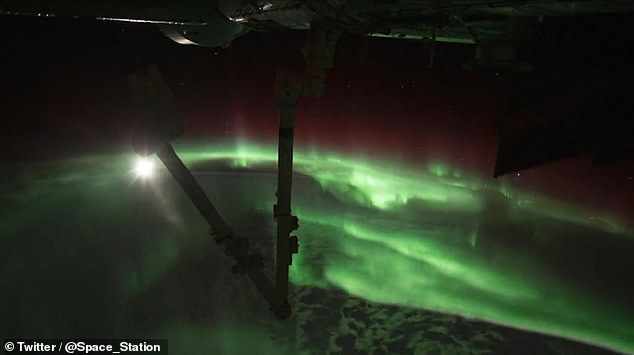 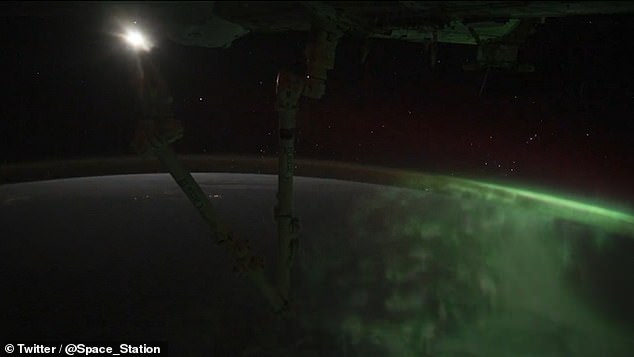 While astronauts on the space station do get a unique view of the phenomenon, the natural wonder can also be witnessed from the ground, with the best vantage points in places in the far north like Alaska, Canada, Iceland, Greenland, Norway, Sweden, and Finland.

On the other side of the planet, in the far south, places such as Tasmania and New Zealand offer the best view of an aurora.

The video was shared on Twitter by the International Space Station account and has now received almost 100,000 views.

‘This timelapse video shows an orbital pass above an aurora-draped Indian Ocean all the way to a moonlit Coral Sea east of Australia,’ the ISS account wrote.

The glow of the Earth’s atmosphere can also be seen above lightning strikes and storms below.

The has been a recent increase in activity from the sun as a result of it coming towards the most active phase in its 11-year solar cycle — hitting peak activity in 2024.

Studies have shown that the level of solar activity currently happening, is about the same as it was 11 years ago, during the same point in the last cycle.

Two months ago, on July 19, auroras were witnessed after a solar storm hit Earth, producing electric greens and purples across the northern US and Canada.

Shortly after, on August 3, there was another solar storm warning. 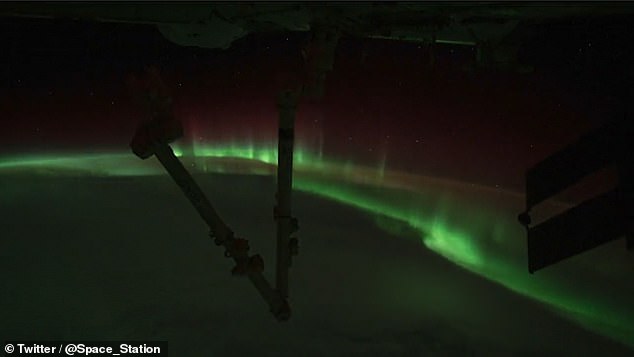 The footage also snaps a striking view of the moon, which in turn lights up the Coral Sea east of Australia with its glint 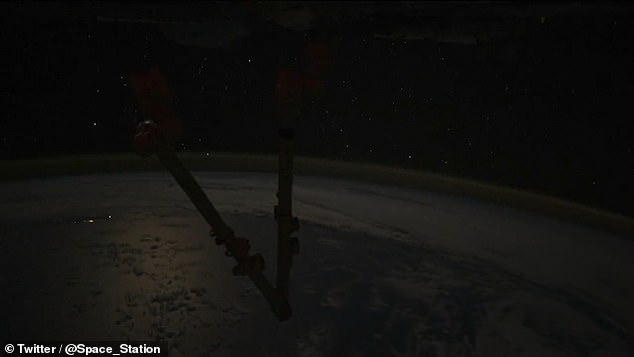 Auroras occur when particles from incoming solar storms strike gases in our planet’s atmosphere, with the collision often leading to these eye-catching displays

There are two types of Aurora – Aurora Borealis, which means ‘dawn of the north’, and Aurora Australis, ‘dawn of the south.’

The displays light up when electrically charged particles from the sun enter the Earth’s atmosphere.

Usually the particles, sometimes referred to as a solar storm, are deflected by Earth’s magnetic field.

But during stronger storms they enter the atmosphere and collide with gas particles, including hydrogen and helium.

These collisions emit light. Auroral displays appear in many colours although pale green and pink are common.

They are more often seen in winter when the nights are cold, long and dark.

They were introduced as a way to communicate to the general public the current and future space weather conditions and their possible effects on people and systems.

The scales have numbered levels, analogous to hurricanes, tornadoes, and earthquakes that convey severity.

Other systems: Pipeline currents can reach hundreds of amps, high frequency radio propagation may be impossible in many areas for one to two days, satellite navigation may be degraded for days, low-frequency radio navigation can be out for hours, and aurora has been seen as low as Florida and southern Texas (typically 40° geomagnetic latitude).

Power systems: Possible widespread voltage control problems and some protective systems will mistakenly trip out key assets from the grid.

Spacecraft operations: May experience surface charging and tracking problems, corrections may be needed for orientation problems.

Spacecraft operations: Surface charging may occur on satellite components, drag may increase on low-Earth-orbit satellites, and corrections may be needed for orientation problems.

Other systems: Intermittent satellite navigation and low-frequency radio navigation problems may occur, HF radio may be intermittent, and aurora has been seen as low as Illinois and Oregon (typically 50°geomagnetic latitude).

Other systems: HF radio propagation can fade at higher latitudes, and aurora has been seen as low as New York and Idaho (typically 55° geomagnetic latitude).

Other systems: Migratory animals are affected at this and higher levels; aurora is commonly visible at high latitudes (northern Michigan and Maine).