The Model S Plaid was modified to be race approved, and will be driven by legendary racecar driver Randy Pobst ,also known as ‘The Rocket’, who drove a Tesla Model 3 Performance in last year’s race.

The 12.4-mile-long track features 156 turns, which Pobst cleared doing more than 100mph at some points.

His best time for the day came in at two minutes and 40 seconds, which was just three seconds shy of the fastest time of the practice run – the best time was a pva 003 Dallenbach Special. 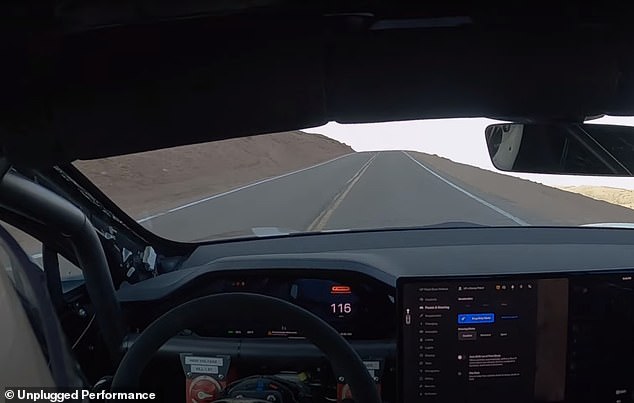 Tesla began delivering its long-awaited Model S Plaid on June 11 that is deemed its fastest car yet.

Musk, along with Tesla’s lead designer, Franz von Holzhausen, introduced the near $130,000 car earlier this month, proudly sharing it goes zero to 60 in under two seconds.

However, to achieve the top speed of 200mph, drivers need ‘proper wheels and tires’ for an undisclosed additional cost, which according to the website, will not be available until fall 2021.

‘Faster than Porsche but safer than Volvo,’ Musk said during the event livestream. 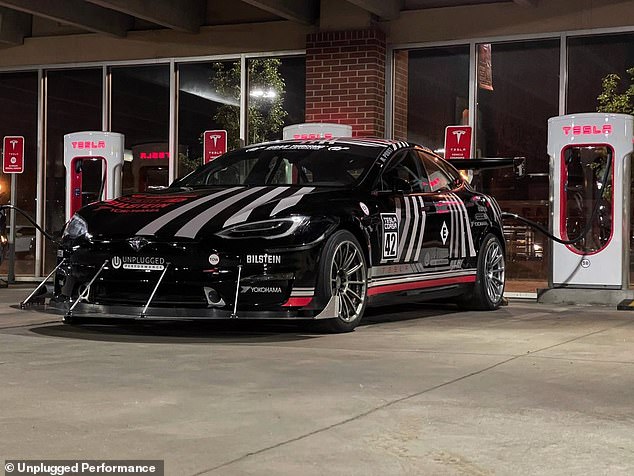 The Model S Plaid racecar features a stock powertrain from Tesla, with a completely stripped interior to reduce weight – the car still weighs about 4,000 pounds

The Model S Plaid’s exterior is fitted with an adjustable rear wing, complete with a Dogecoin sticker. The Model S Plaid took off in a flash from the starting line and embarked on its journey to the top of the mountain

And the world got one of the first looks of the car in action as Pobst took it for a spin ahead of the Pikes Hill Climb.

The Model S Plaid racecar features a stock powertrain from Tesla, with a completely stripped interior to reduce weight – though the car still weighs about 4,000 pounds, Teslarati reports.

A roll cage has been added, along with racing seats that include six-point seatbelts.

The Model S Plaid’s exterior is fitted with an adjustable rear wing, complete with a Dogecoin sticker.

Doge is an Internet meme that became popular in 2013, which has become the face of  cryptocurrency and Musk appears to be a huge fan of the dog.

The Model S Plaid took off in a flash from the starting line and embarked on its journey to the top of the mountain.

Pobst took the first curve at 79mph and the second at 100mph.

Although the main objective of the race is to finish with the least amount of time, another goal is to no fall off the edge.

Last year, Pobst was cruising in the Model 3, hit a turn and fell off the course.

Over the course of a video shared by Unplugged Performance, the Model S Plaid is seen accelerating out of corners at nearly lightning speed and at one point hits 136mph, Teslarati reports.

The speed may not seem much, but climbing a 14,000-mile high mountain is typically draining on a vehicle.

The Model S Plaid was altered to be race approved, and will be driven by Randy Pobst

During the test run, Pobst pushed the vehicle towards the summer and said aloud how fast the vehicle is – he can also be heard laughing as he rips around corners without guardrails.

Pikes Peak Hill Climb is called ‘the race to the clouds’ and has been held every year since 1916, making it one of the oldest races in the US.

The official race is scheduled for Sunday, June 27. 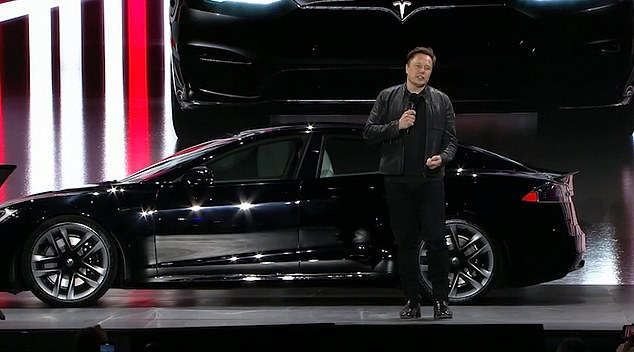 Tesla began delivering its long-awaited Model 3 Plaid on June 11 that is deemed its fastest car yet. Elon Musk (pictured) introduced the near $130,000 car

The first race in 1916 saw the best time of 20 minutes and 55 seconds, but vehicles have come a long way and are leaving such times in the dust.

Pobst chose to run the potentially deadly race after driving the car earlier this month at the Laguna Seca raceway in California.

The Model S Plaid raced against the McLaren P1 and the McLaren Senna, both of which can top speeds of more than 200mph.

In the end, Tesla’s new vehicle dominated the track, with some viewers saying it moved so fast the other vehicles looked as if they were standing still.

Model, Plaid, S, See, Teslas
You may also like: