When the world stood still: Ground vibrations caused by traffic and industrial work HALVED during the coronavirus lockdown, study shows

Social distancing, fewer cars on roads and drops in tourism and travel resulted in the ‘longest and most pronounced quiet period’ of seismic noise in recorded history.

Seismic noise refers to vibrations in the ground, caused by traffic or heavy machinery and natural phenomena such as earthquakes and adverse weather.

Global human-caused (anthropogenic) seismic noise dropped by 50 per cent during March to May as counties entered lockdown to halt the spread of SARS-CoV-2.

The largest drops in seismic noise were recorded in the most densely populated areas around the world, like Singapore and New York City.

But drops in seismic noise were also recorded in remote areas like Germany’s Black Forest and Rundu in the African country of Namibia. 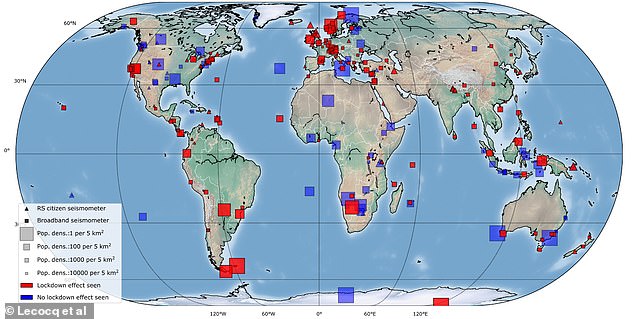 Locations of the 268 global seismic stations with usable data. Lockdown effects are observed (red) at 185 out of 268 stations. Symbol size is scaled by the inverse of population density to emphasise stations located in remote areas

Lockdown gave geoscientists an opportunity to spot natural events that may have otherwise remained undetected – especially during the daytime when there is more human-made noise.

This relative quietness allowed researchers to listen in to previously concealed earthquake signals, and could help differentiate between human and natural seismic noise more clearly than ever before.

The study, which includes contributions from experts at Imperial College London, provides the first evidence that previously concealed earthquake signals appeared clearer on seismometers in urban areas during lockdown. 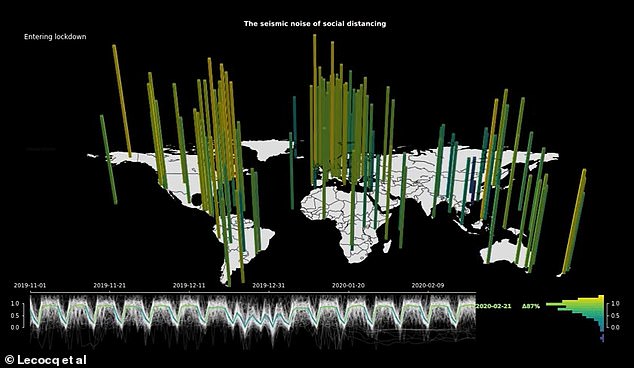 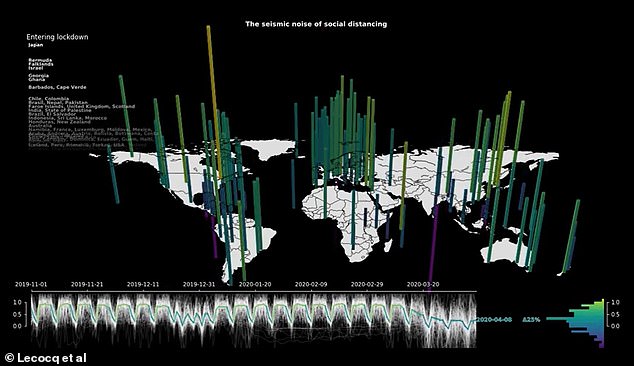 Worldwide noise at the start of April after European countries including Italy, France and the UK had entered lockdown. A notable decline in noise is apparent around the start of March

WHAT IS A SEISMOMETER?

A seismograph, or seismometer, is an instrument used to detect and record seismic noise such as from earthquakes.

Generally, it consists of a mass attached to a fixed base.

The motion of the base with respect to the mass is commonly transformed into an electrical voltage.

The electrical voltage is recorded on paper, magnetic tape, or another recording medium.

Seismograph generally refers to the seismometer and its recording device as a single unit.

Seismometers record signals from more than just earthquakes: interactions between the solid Earth and fluid bodies, such as ocean swell and atmospheric pressure, as well as human activity.

‘It will therefore become more important than ever to differentiate between natural and human-caused noise so that we can “listen in” and better monitor the ground movements beneath our feet.

‘This study could help to kick-start this new field.’

The researchers used devices called seismometers to measure seismic noise, which travels like waves and can also be triggered by earthquakes, volcanoes and bombs, as well as daily human activity like travel and industry.

Researchers relied on professional seismometers and ‘citizen seismometers’ – more compact devices that can be ordered online and assembled in the home, including those provided by Panama-based firm Raspberry Shake.

Dr Lecocq and colleagues looked at seismic data from a global network of 268 seismic stations in 117 countries.

In the UK alone, there were seismometers located in London, Gatwick and Truro School in Cornwall, as well as Stonehaven, Edinburgh, Aberdeen and Glasgow in Scotland.

The team found that noise levels were reduced during lockdown at 185 of the 268 seismic stations positioned globally.

At a permanent seismic station in Sri Lanka, a 50 per cent reduction in seismic noise occurred after lockdown, which was the strongest the team observed in the available data from that station since at least July 2013.

In Central Park, New York, on Sunday nights, seismic noise was 10 per cent lower during the lockdown compared to before.

The team also noted a near-global reduction in high-frequency seismic ambient noise, which began in China in late January and followed in Europe and the rest of the world in March to April.

The global spread of the seismic ‘quieting’ was closely correlated to when lockdown measures went into effect in countries around the world, an animation from the team shows, including the UK at the end of March.

Human-generated noise usually dampens during quiet periods like over the Christmas and New Year period and Chinese New Year, and also during weekends and overnight.

However, the drop in vibrations caused by coronavirus lockdown measures ‘eclipse even those seen during these periods’ the researchers claim.

Researchers are dubbing this drop in anthropogenic (human-caused) noise and noise pollution the ‘anthropause’.

‘This is the first global study of the impact of the coronavirus anthropause on the solid Earth beneath our feet,’ said study co-author Dr Stephen Hicks at Imperial College London.

‘This quiet period is likely the longest and largest dampening of human-caused seismic noise since we started monitoring the Earth in detail using vast monitoring networks of seismometers. 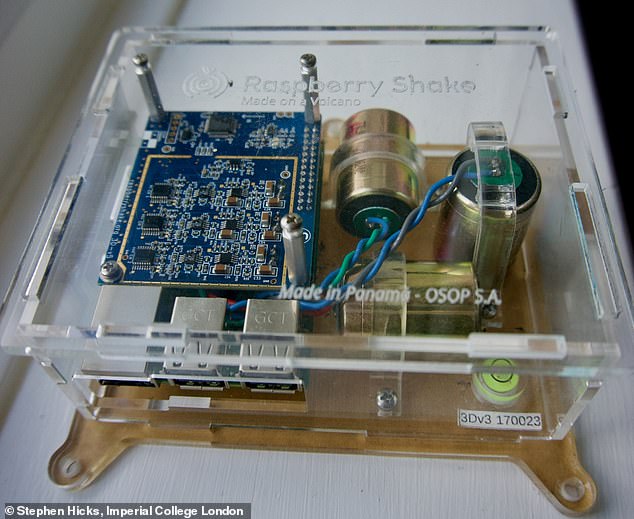 One of the citizen seismometers, known as ‘Raspberry Shake’, to detect ebbs in vibration during lockdown

‘Our study uniquely highlights just how much human activities impact the solid Earth, and could let us see more clearly than ever what differentiates human and natural noise.’

Citizen-owned seismometers, which tend to measure more localised noise, noted large drops around universities and schools around Cornwall and Boston in the US – a drop in noise 20 per cent larger than seen during school holidays.

Countries like Barbados, where lockdown coincided with the tourist season, saw a 50 per cent decrease in noise.

This coincided with flight data that suggested tourists returned home in the weeks before official lockdown.

The study has been published in the journal Science.

SEISMIC NOISE AND THE CORONAVIRUS LOCKDOWN

Over the past few decades, seismic noise has gradually increased as economies and populations have grown.

Like earthquakes and other geophysical processes and events, humans are a major source of seismic signals detected by seismometers worldwide.

Everyday human activity – from our involvement in industrial processes and construction projects to our raucous outbursts at football stadiums – generates vibrations in the earth that are recorded as a near-continuous stream of high-frequency seismic waves.

In general, this seismic noise closely tracks with human behaviour – it’s typically stronger during the day than at night and weaker on weekends and holidays than it is on typical weekdays.

But drastic changes to daily life caused by the pandemic have provided a unique opportunity to study their environmental impacts, such as reductions in emissions and pollution in the atmosphere.

The changes have also given the opportunity to listen in to the Earth’s natural vibrations without the distortions of human input.

Dr Stephen Hicks at Imperial College London said: ‘The lockdowns caused by the coronavirus pandemic may have given us a glimmer of insight into how human and natural noise interact within the Earth.

‘We hope this insight will spawn new studies that help us listen better to the Earth and understand natural signals we would otherwise have missed.’