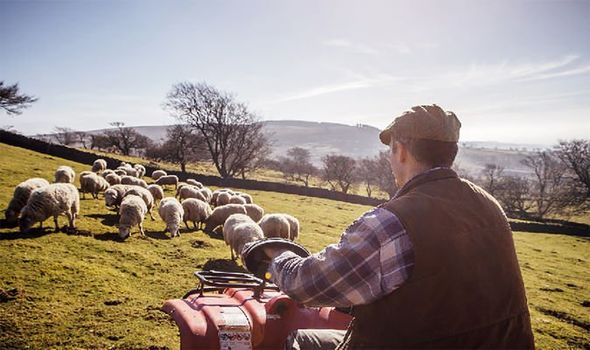 But a shepherd turned sergeant is using the technology to trace killer dogs that have savaged sheep, after a spate of attacks on livestock.

Sgt Darren Walshaw, who was born and raised on a farm, now leads Kent Police’s rural crime task force after 16 years as a stockman.

He is using forensic science to improve the safety of sheep in the county and ensures all found dead or injured with bite marks are swabbed for DNA so they can be compared to any suspect dogs.

It follows a spate of attacks by loose dogs on livestock, leading to several deaths or stressed pregnant sheep aborting their lambs.

One case involving dog DNA has led to a successful prosecution for the owner. Many other owners have owned up once they were told police have obtained a DNA sample from the dead animal.

Sgt Walshaw said: “We get significant reports of livestock worrying when dogs are let off leads, so there is a lot of conflict between dog owners and farmers.

“When we get dead or injured stock we use DNA and will swab the injured area. If we identify a dog we can compare its DNA to that from the bite mark and prove the dog caused it. We do that with pretty much every case reported.

“We speak to the owner first to see their attitude, and if there is a denial we run the DNA sample.

“With one last year we ran a DNA comparison through court successfully.

“A lot of the time an owner says it was not my dog, but when we say we have got DNA then they say it must have been.”

Live investigations have seen DNA swabs taken from sheep as recently as last Saturday when it was reported that a ram had suffered fatal injuries after it was believed to have been attacked by a dog in Shadoxhurst.

Another live investigation where DNA was obtained, but the suspect dog or dogs have yet to be traced, saw 15 sheep killed or found dead.

More were injured over three days in Alkham, Dover.

On Saturday, December 4, at around 5.50pm, the owner of a farm saw a grey dog which looked similar to a lurcher, in among her sheep. Six sheep died and four were injured.

Overnight on December 6, there was a second attack at the farm in which two more sheep were killed and one seriously injured. And on a nearby farm on December 5, seven sheep were found dead.

Once a dog has a taste for killing and maiming sheep it often returns.

Farmers are allowed under law to shoot them to protect flocks.

Mr Walshaw was given a role in the rural crime team within 18 months of joining the force due to his previous experience. Some of the sheep he deals with are suspected to have been killed by dogs released for illegal hare coursing.

Organised gangs can rip up fields and drive through fences to carry out hare coursing events that are then live streamed on social media – with illegal betting taking place.

Mr Walshaw said the force has teamed up with police in Essex, Suffolk, Norfolk, Cambridgeshire, Hertfordshire and Bedfordshire to issue hare coursers and other suspected poachers with “rural ASBOs” to try to stamp it out.

Mr Walshaw said: “We use antisocial behaviour legislation to issue community protection warnings that it is unacceptable and has a detrimental impact on the rural community. If they are caught in other parts of the region it shows as we share the same system.”

If they are caught again they can be issued with a community protection notice, which can lead to a court appearance if breached.

Eight of these have been served across the region after 102 warnings were handed out since the start of the season in the autumn.

Mr Walshaw said his team deals with an array of crimes across the countryside with no two days the same. Poachers are now targeting deer with lurchers crossbred with bull terriers to increase their strength to take down large animals.

Poaching of large carp is a new phenomenon, with many taken by eastern Europeans as food, or even stolen to order to stock fishing lakes. Larger specimens can fetch thousands of pounds.

Illegal puppy farms remain an issue, with breeders keeping puppies in terrible cramped conditions, but showing them to customers at better locations, claiming they were bred there.

Theft of expensive farming machinery, often shipped overseas, always remains a problem. But this summer saw a new crime wave, with strawberry and cherry growers stripped of their entire stock overnight, only for it to be sold at car boot fairs or by roadside vendors.