SpaceX’s Dragon spacecraft docked at the International Space Station on Saturday morning around 5 a.m. ET, a day after the rocket launched from Cape Canaveral in Florida.

The spacecraft was carrying four astronauts who will begin a six-month mission. 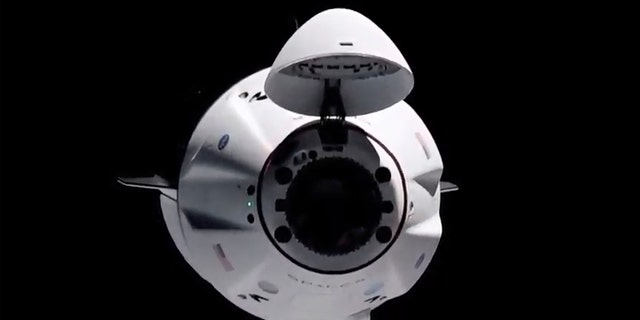 In this image made from NASA TV, the SpaceX Crew Dragon spacecraft is seen from the international space station, Saturday, April 24, 2021. The recycled SpaceX capsule carrying four astronauts has arrived at the International Space Station, a day after launching from Florida. (NASA via AP)

The Dragon capsule docked autonomously with the orbiting outpost 260 miles above the Indian Ocean.

The astronauts will replace four others who are scheduled to return to Earth in their own Dragon capsule Wednesday.

It was the first time two SpaceX crew Dragons were parked there at the same time — practically side by side.

The Dragon spacecraft is the third crewed SpaceX flight for NASA but the first time a recycled spacecraft has been used, part of a cost-efficiency plan and an essential part of CEO Elon Musk’s push to the moon and Mars.

The space station will house 11 astronauts for the next four days.

The four arriving astronauts are NASA’s Shane Kimbrough and Megan McArthur — the commander and pilot of the Dragon — and France’s Thomas Pesquet and Japan’s Akihiko Hoshide.

McArthur flew to the space station in the same seat and the same capsule — Endeavour — as her husband, Bob Behnken, did on SpaceX’s debut crew mission.

On Wednesday, three Americans and one Japanese astronaut who have been at the space station will depart for home and a splashdown in the Gulf of Mexico.

astronauts, at, dock:, inte, SpaceX
You may also like: