Follow
Home » Science » SpaceX just launched 5,000 tardigrades into space so astronauts can study how indestructible they are

SpaceX just launched 5,000 tardigrades into space so astronauts can study how indestructible they are

This kind of uncrewed cargo mission typically heads to the space station every couple months to drop off food and supplies for the astronauts on board. The missions also deliver materials for science experiments. SpaceX has been conducing these resupply voyages since 2012 — this was the company’s 22nd such launch. The Dragon capsule is expected to dock to the ISS at 5 a.m. on Saturday.

Tardigrades are ripe for study in space because they are among the hardiest critters in the animal kingdom. The tiny creatures — they’re less than one-tenth of a inch long  — have been launched off the planet three times before, and have shown that they can even reproduce in the vacuum of space. Other research has found that tardigrades can survive in an Antarctic lake nearly a mile underground, and that they can return to normal functioning after being frozen for three decades.

The goal of the upcoming tardigrade research on the space station is to study how tardigrades adapt to life in orbit.

“Spaceflight can be a really challenging environment,” Thomas Boothby, a molecular biologist from the University of Wyoming who’s leading the tardigrade research, said in a press release. “One of the things we are really keen to do is understand how tardigrades are surviving and reproducing in these environments and whether we can learn anything about the tricks that they are using and adapt them to safeguard astronauts.” 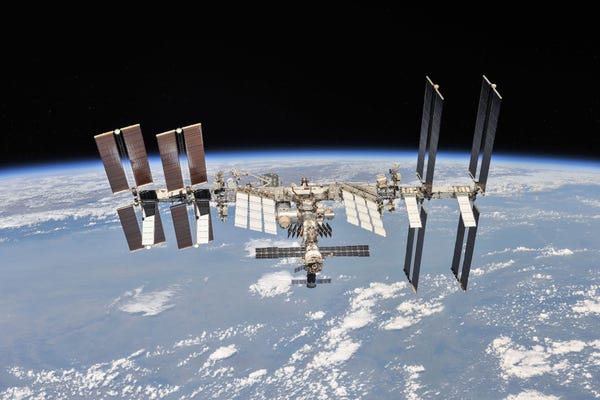 The tardigrades are among dozens of experiments that scientists sent up to the floating laboratory on Thursday. Also onboard was a squad of 128 baby, bioluminescent bobtail squid, according to CNN. Biologists plan to examine the effects of microgravity on the bacteria that help these squid glow in the dark.

In total, the resupply mission is transporting 7,300 pounds of supplies — including fresh produce and new solar arrays — to the space station, where five astronauts and two cosmonauts are currently living and working.

How well can tardigrades and squid adapt to life in space?

While this is the maiden space voyage for bobtail squid, it isn’t the first time tardigrades have launched into space or even visited the ISS. A 2007 European Space Agency mission sent tardigrades into low-Earth orbit, and then Italian scientists launched the creatures to the space station again in 2011. Most recently, an Israeli spacecraft was carrying a horde of tardigrades when it crashed on the moon in 2019, possibly killing them.

Tardigrades are also known as water bears or moss piglets — apt nicknames, considering that under a microscope, the organisms look like eight-legged potatoes with scrunched-up faces and tiny paws. 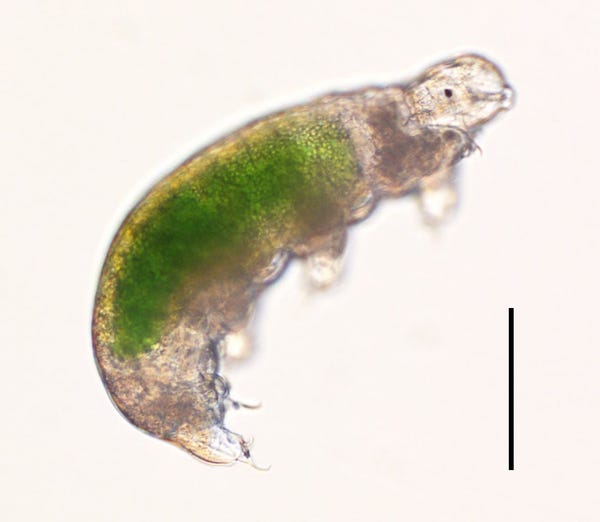 That’s because water bears, like their mammal namesake, can enter a state of hibernation. They can go without water and oxygen for long periods of time in a state of suspended animation called cryptobiosis, in which their bodies dry up and their metabolisms shut down. Place a dehydrated, hibernating tardigrade in water, and it regains its full function in a matter of hours.

That hardiness makes tardigrades an ideal organism to study in space, and then to attempt to emulate.

Boothby’s group has sequenced the genome of the tardigrade species, Hypsibius exemplaris, that is now en route to the ISS in its hibernation state. After astronauts on board rehydrate the tardigrades, they plan to study how the species’ genes change while in orbit. By identifying which parts of the tardigrade genome get tweaked over time, Boothby’s team could learn more about how the creatures adapt so well to extreme environments.

For example, if the researchers find that the water bears are making more antioxidants to negate the effects of increased radiation in space, scientists could then counsel astronauts to incorporate more antioxidants — like vitamins C and E  — into their diets.

“That would just help them stay healthier in space for longer,” Boothby said on a NASA podcast last week. 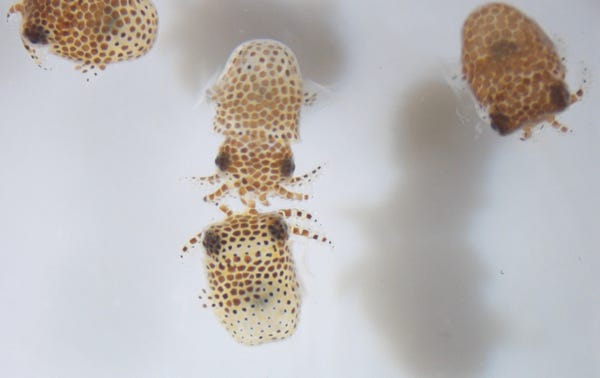 Bobtail squid, meanwhile, may yield insights into how spaceflight and life in microgravity affect the microbes in astronauts’ immune systems.

“Animals, including humans, rely on our microbes to maintain a healthy digestive and immune system,” Jamie Foster, a microbiologist from the University of Florida and lead scientist on the squid experiment, said in the release. “We do not fully understand how spaceflight alters these beneficial interactions.”

Each bobtail squid is smaller than a fingernail and glows in the dark thanks to bacteria that colonize a light organ in its body. So if the relationship between that bacteria and the squid changes, the animal’s bioluminescence may observably change too.

By having astronauts study the squid in orbit, Foster’s team hopes to explore how microbes’ relationships with their animal hosts change in space.