Follow
Home » Science » SpaceX Will Fly 4 Astronauts Home to Earth: How to Watch

SpaceX Will Fly 4 Astronauts Home to Earth: How to Watch

Four astronauts are taking the redeye home to Earth on Saturday.

Later this evening, a crew of four — three NASA astronauts and one from Japan’s space agency — will push off from the International Space Station in a capsule built by SpaceX. The astronauts will circle the planet a number of times over the hours that follow until they splash down early on Sunday morning along Florida’s Gulf of Mexico coast.

NASA has not conducted a nighttime splash down like this since 1968, when Apollo 8, the first mission to send astronauts around the moon, returned to Earth.

Here’s what you need to know:

When are the astronauts leaving and how can I watch?

The astronauts’ return to Earth has been repeatedly delayed because of weather. Forecasts in the splashdown zone had not been favorable, but NASA said that “ideal conditions” were expected over the weekend.

NASA will stream live coverage of these operations starting at 6 p.m. on NASA TV.

When will the astronauts splash down on Earth?

The approximate timing of the splash down is 2:57 a.m. Eastern time on Sunday. The agency has scheduled a news conference with NASA, SpaceX and other officials for 5 a.m. on Sunday. 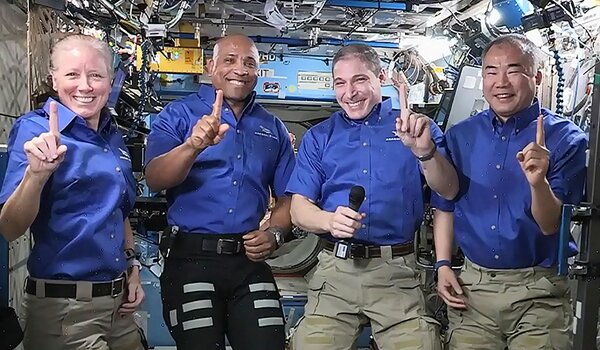 What happens during the astronauts’ trip home?

It’ll be a long trip. The astronauts will board the Crew Dragon and the hatch will close at 6:20 p.m., but then more than two hours will pass before the capsule leaves as the astronauts check that there are no air leaks from either the capsule, named Resilience, or the space station. Resilience is to autonomously undock at 8:35 p.m. and then perform a series of thruster firings to move away from the space station.

It will then circle the plant until Florida lines up in the correct position for it to splash down in the Gulf of Mexico.

Just before 2 a.m., as it prepares for its return to Earth, the Crew Dragon will jettison what SpaceX calls the “trunk” section of the spacecraft — the cylindrical compartment below the gumpdrop-shaped capsule. The trunk will burn up in the atmosphere.

Five minutes after the trunk is detached, the capsule will fire its thrusters to drop out of orbit.

Once it is low enough in Earth’s atmosphere, parachutes will deploy to gently lower the capsule into the sea.

What is the space debris risk to the astronauts?

Typically, the risk of space junk hitting a spacecraft going to or from the space station is small. It is generally a pretty short trip — about a day — and a spacecraft like Crew Dragon is pretty small, so it’s not a big target for a wayward piece of debris.

But when another group of astronauts, Crew-2, launched last week in a different Crew Dragon, they had a bit of a scare when mission control at SpaceX headquarters in California told them that there was a piece of debris headed their way. They put their spacesuits back on and got back in their seats just in case the spacecraft was hit, which could cause depressurization of the capsule.

Mission control then provided a reassuring update: Further analysis indicated the closest approach of the space debris was not that close after all. Still, as a precaution, the astronauts waited until they were told that the space junk had passed by.

The next day, a NASA spokesman said the debris had passed by at a distance of 28 miles — not very close at all.

Then, the United States Space Command, which tracks orbiting debris, made a more perplexing update: The piece of debris that supposedly passed by the Crew Dragon never existed at all. A Space Command spokeswoman said a review was underway to determine what caused the spurious warning.

Who are the astronauts?

There are four astronauts on Crew-1:

Victor Glover, 45, selected by NASA in 2013 to be an astronaut, is on his first spaceflight. He is also the first Black NASA astronaut to be a member of a space station crew.

Michael S. Hopkins, 52, a colonel in the United States Space Force, is the commander for the flight. (Colonel Hopkins is also the first member of the newly created U.S. Space Force to go to space.) He was one of nine astronauts selected by NASA in 2009. He has made one previous trip to the International Space Station, in 2013-14, spending 166 days in orbit.

Soichi Noguchi, 56, an astronaut with JAXA, the Japanese space agency, is completing his third trip to space. He was a member of the crew of the space shuttle Discovery in 2005, on the first shuttle launch after the loss of Columbia and its seven astronauts more than two years earlier.

During that visit to the International Space Station, Mr. Noguchi made three spacewalks. That included one to test techniques developed to repair damage to the heat tiles on the shuttle similar to what had doomed Columbia when it re-entered Earth’s atmosphere. In 2009-10, he spent five months in orbit as a member of the space station crew.

Shannon Walker, 55, has had one previous stint on the space station, in 2010. Dr. Walker has a doctoral degree in space physics from Rice University, where she studied how the solar wind interacted with the atmosphere of Venus.