But first, it will drop off NASA astronauts at the moon.

NASA announced on Friday that it had awarded a contract to SpaceX for $2.9 billion to use Starship to take astronauts from lunar orbit to the surface of the moon.

The contract extends NASA’s trend of relying on private companies to ferry people, cargo and robotic explorers to space. But it also represents something of a triumph for Mr. Musk in the battle of space billionaires. One of the competitors for the NASA lunar contract was Blue Origin, created by Jeffrey P. Bezos of Amazon.

SpaceX now outshines Blue Origin and other rocket builders, emphasizing how it has become the highest-profile partner of NASA in its human spaceflight program.

When NASA achieves the goal of landing the next astronauts on the moon as part of its Artemis program — now promised by the Biden administration to include the first woman and the first person of color there — they are likely to be riding in a SpaceX vehicle.

“We are confident in NASA’s partnership with SpaceX to help us achieve the Artemis mission,” Lisa Watson-Morgan, the program manager at NASA overseeing development of the landers, said during a telephone news conference on Friday, “and look forward to continuing our work toward landing astronauts on the moon to prepare for the next giant leap towards Mars.”

News of the award was reported earlier in The Washington Post.

NASA last year awarded contracts to three companies for initial design work on landers that could carry humans to the lunar surface. In addition to SpaceX, NASA selected proposals from Dynetics, a defense contractor in Huntsville, Ala., and Mr. Bezos’ Blue Origin, which had joined in what it called the National Team with several traditional aerospace companies: Lockheed Martin, Northrop Grumman and Draper.

The award is only for the first crewed landing, and SpaceX must first perform an uncrewed landing. “NASA is requiring a test flight to fully check out all systems with a landing on the lunar surface prior to our formal demonstration mission,” Ms. Watson-Morgan said.

NASA officials said Blue Origin, Dynetics and other companies would be able to bid for future moon landing missions.

Kathy Lueders, NASA’s associate administrator for human exploration and operations called it the “best strategy” for NASA at this point in time to award the contract to one company, “and then begin discussions with industry about how to further develop additional competition out there for a future services contract.”

President Biden is sustaining plans started under President Donald J. Trump to send astronauts back to the moon. But while Mr. Trump pledged a return by 2024, the schedule was not considered realistic after Congress did not provide requested financing, and NASA is now re-evaluating the schedule.

The NASA Artemis program is expected to launch its first uncrewed trip either later this year or early next year, using a powerful rocket called the Space Launch System to propel the Orion capsule, where future astronauts will be sitting, on a trip to the moon and back. The booster stage of the rocket passed an important ground test last month.

For the spacecraft that would land astronauts on the moon, NASA had been expected to choose two of the three companies to move forward and build their landers, mirroring the approach the space agency has used for hiring companies to take cargo and now astronauts to the International Space Station. Two options provide competition that helps keep costs down, and provides a backup in case one of the systems encounters a setback. 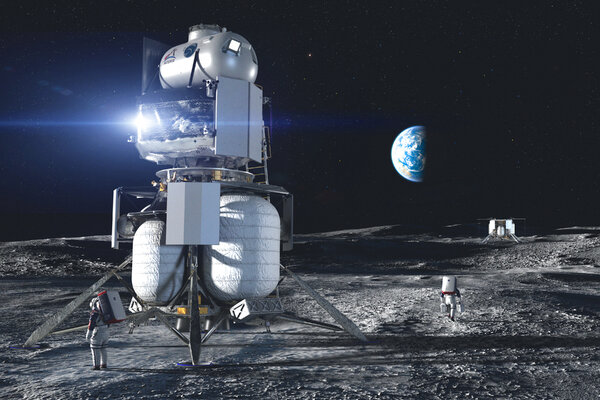 NASA officials suggested that budget constraints — Congress in the current fiscal year appropriated only about one-fourth of the financing that had been requested for the development of the landers — shaped their decision.

“We believe this is doable within what we what we have and what we can expect in funding,” said Steve Jurczyk, the acting administrator of NASA.

In choosing just SpaceX, NASA officials also seem to be saying they believe that Mr. Musk’s company can deliver on an ambitious spacecraft design, one that is far larger and more capable than what NASA actually needs. Indeed, once Starship starts operations, it would raise questions why NASA needs the Space Launch System rocket at all.

Each launch of the Space Launch System is expected to cost more than $1 billion. Because Starship is designed to be fully reusable, its costs will be far cheaper.

The Artemis plans currently call for the astronauts to launch into orbit on top of a Space Launch System rocket. The upper stage of the rocket is to then propel the Orion capsule, where the astronauts will be sitting, toward the moon.

Unlike NASA’s Apollo moon missions in the 1960s and 1970s, the lander spacecraft is to be sent separately to lunar orbit. Orion is to dock with the lander, which will then head to the surface.

But Starship will dwarf Orion in size, making the architecture similar to sailing a yacht across the Atlantic Ocean and then switching to a cruise ship for the short ride into port.

Starship, in principle, can take astronauts all the way from Earth to the moon without as much of the elaborate choreography of docking. Starship will need to be refueled with methane and liquid oxygen in orbit.

A Japanese billionaire, Yusaku Maezawa, has bought an around-the-moon flight on Starship. That trip, which could occur as soon as 2023, would only pass by the moon and not land.

SpaceX has been launching a series of high-altitude tests of Starship prototypes at its site at the southern tip of Texas, not far outside Brownsville, to perfect how the spacecraft would return to Earth. SpaceX has made great progress with the maneuver of belly-flopping to slow its fall, but the tests so far have all ended explosively.

Mr. Musk recently pledged that the spacecraft would be ready to fly people to space by 2023, although he has a track record of overpromising and underdelivering on rocket development schedules.

Nevertheless, SpaceX’s Falcon 9 rocket has become the workhorse of American and international spaceflight with its reusable booster stage. The company has twice carried astronauts to the International Space Station for NASA, and it is scheduled to loft a third crew there on Thursday.

Numerous private satellite operators have relied on the company to carry their payloads to orbit. And another company, Astrobotic, announced this week that it had picked a larger SpaceX rocket, Falcon Heavy, to carry a NASA rover called VIPER to the moon’s south pole to prospect for ice in the coming years.

On Friday, the Biden administration also announced the nomination of Pamela Melroy, a former astronaut, to become NASA’s deputy administrator. Last month, Bill Nelson, a former Florida senator, was nominated to be administrator.

Moon, Nasa, Private space, SpaceX
You may also like: