Why watching The Traitors before bed is a GOOD idea: Suspenseful TV helps you to fall asleep FASTER, study finds

For many people, watching TV before bed can be a lovely way to relax after a long day at work.

You may think the best thing to send you off to the land of nod would be a slow-paced episode of ‘Countryfile’, or a repeat of ‘Antiques Roadshow’.

However, scientists from the University of Fribourg in Switzerland have found that this isn’t the case, and instead say that trying to decide who is Faithful on ‘The Traitors’ is a better option.

Suspenseful programmes are more interesting, meaning viewers are less likely to feel ‘frustration, sadness or anger’ afterwards, according to the researchers. 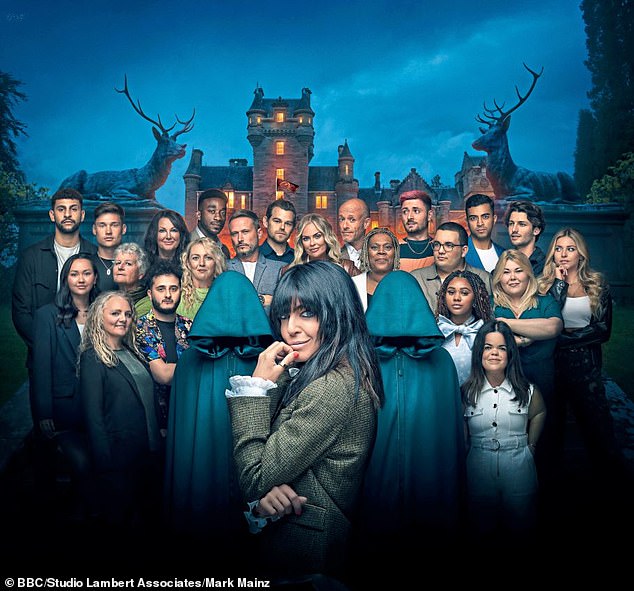 Scientists from the University of Fribourg have found that watching suspenseful TV, like ‘The Traitors’ (pictured), before bed helps you to fall asleep faster 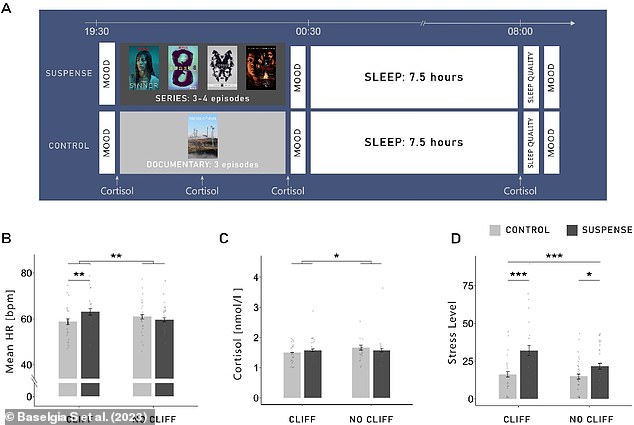 In the study, participants watched three hours of a TV show and documentary on subsequent evenings. While they were asleep, sensors recorded brain activity, heart rate, eye movement and breathing, all of which indicate sleep stage and quality

Watching a suspenseful TV series before bed will make you fall asleep nearly five minutes faster than a less engaging documentary would.

This is thought to be because boring programmes are more likely to elicit feelings of ‘frustration, sadness or anger’ which can delay sleep onset.

The genre of the show watched also does not impact overall sleep time or number of times the viewer wakes up in the night.

However, a suspenseful programme keeps the heart rate higher during the first two sleep cycles, and the inclusion of cliffhangers decreases the brain’s ‘sleep oscillations’.

This is where brain activity slows down, and can be brought on by stress, sleep apnea or sleep deprivation.

These feelings, which may be elicited through a less engaging show, could delay sleep onset.

On the other hand, they found that watching suspenseful programmes keeps the heart rate higher in the first two sleep cycles.

The inclusion of a ‘cliffhanger’ – where an abrupt ending during a scene results in an unfinished storyline – also decreases the brain’s ‘sleep oscillations’.

This is where brain activity slows down, and can be brought on by stress, sleep apnea or sleep deprivation.

However, the genre of the show does not impact overall sleep time or the number of times you wake up in the night.

In their study, the authors wrote: ‘TV series ending with cliffhangers can increase aspects of arousal and can reduce the recovery function of sleep, e.g. by decreasing sleep depth and associated brain oscillations in the first two cycles of sleep.

‘Cliffhangers are used by streaming services to encourage users to continue watching, which delays bed time even further, which clearly can have detrimental effects on sleep.

‘To promote sleep, we recommend reducing the use of cliffhangers in TV series, or at least offer options to close the story lines before going to sleep or stop the episode before the cliffhanger.’

For their study, published in Sleep Medicine, the authors wanted to see if there was a relationship between poor sleep quality and watching suspenseful television.

Specifically, they aimed to probe the impacts of both cliffhangers and ‘binge watching’ – where episodes are watched one after the other in a single sitting. 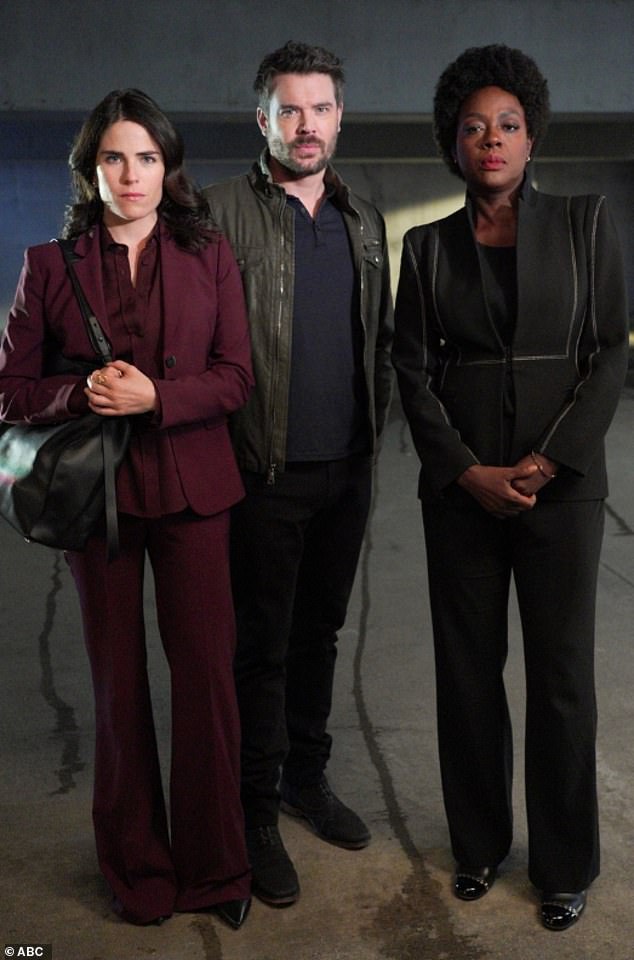 On one night, study participants watched three hours of either ‘How to Get Away with Murder’ (pictured), ‘Orphan Black’, ‘Sense8’ or ‘The Sinner’ 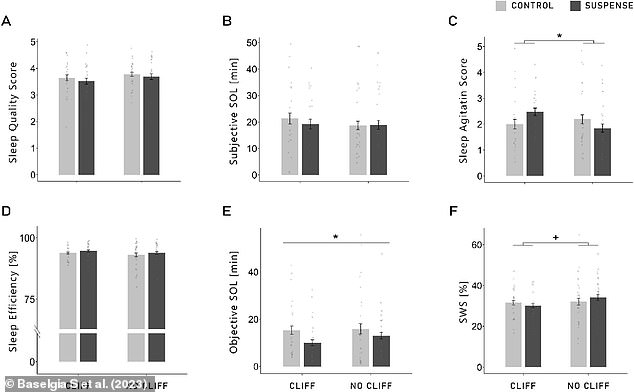 The results showed that suspenseful TV series (dark grey) induced higher pre-sleep arousal than the documentary (light grey), particularly when there were cliffhangers. Despite this, regardless of whether it ended on a cliffhanger, watching the drama series did not result in worse sleep quality than the documentary. In fact, participants fell asleep almost five minutes faster after watching the suspenseful programmes

To do so, they recruited 50 adult participants with an average age of 23 to watch three hours of TV each night for two nights.

On one of those nights, they watched ‘Islands of the Future’ – a documentary about five islands across the world that are exploring sustainable energy solutions.

On the other night they watched a more suspenseful TV programme – either ‘How to Get Away with Murder’, ‘Orphan Black’, ‘Sense8’ or ‘The Sinner’.

Just under half of the participants had their binge-watching session of the series end with a cliffhanger, while the storyline was all tied up for the others.

To gauge their level of pre-sleep arousal, participants had their heart rate and levels of cortisol – the ‘stress hormone’ – measured before they went to sleep, and also self-reported their stress levels.

While they were asleep, sensors recorded brain activity, heart rate, eye movement and breathing, all of which indicate sleep stage and quality.

The morning after the experiment, participants were asked to rate their sleep quality and how quickly they thought they nodded off.

The results showed that suspenseful TV series induced higher pre-sleep arousal than the documentary, particularly when there were cliffhangers.

Despite this, regardless of whether it ended on a cliffhanger, watching the drama series did not result in worse sleep quality than the documentary.

The authors wrote: ‘Our results speak against large impairments of pre-sleep watching of multiple episodes of suspenseful TV series and cliffhangers on sleep quality and architecture.’

However, as the suspenseful genre results in a raised heart rate and cliffhangers slow down brain oscillations, the scientists say that sticking on a TV drama before bed is still ‘problematic’.

They concluded: ‘While watching suspenseful TV series before sleep did not impair sleep quality in our study, we would still recommend to restrict the time of media use to allow for sufficient, age-adequate sleep opportunities, which are important for optimal health and cognitive functioning.’

ADULTS WHO BELIEVE IN THE PARANORMAL HAVE MORE SLEEP ISSUES

by Sophie Freeman for MailOnline

Thoughts of things that go ‘bump in the night’ can often cause problems for children at bedtime.

Now researchers have found that adults, too, can have sleep issues linked to a belief in the paranormal.

Psychologists studied nearly 9,000 people and found those who believed in any type of paranormal phenomena, such as ghosts or mediumship, reported taking longer to fall asleep, and sleeping for less time.

As well as poorer overall sleep, those who specifically thought that near-death experiences were evidence for life after death were also more likely to have experienced sleep paralysis, the team from Goldsmiths University of London found.

Sleep paralysis is a temporary inability to move that typically occurs when waking up, and some people who experience it may perceive it as evidence for the paranormal, the researchers said.

Professor Chris French, one of the authors of the study, which was published in the peer-reviewed Journal of Sleep Research, said: ‘The correlation between the belief that near-death experiences provide evidence in support of life after death and the experience of sleep paralysis rests upon the belief that consciousness or, if you prefer, “the soul” can become separated from the physical body.

‘Anyone who has had an out-of-body experience may therefore be more inclined to believe in a soul that perhaps may survive bodily.

‘Also, if an individual hallucinates what they perceive to be spiritual beings, such as ghosts or demons, during an episode of sleep paralysis, this may increase their level of belief in spirits in general, including their belief in a personal immortal soul.’

Study participants who believed that aliens had visited Earth or interacted with humans were also more likely to have experienced sleep paralysis, as well as a sleep disorder called exploding head syndrome (EHS).

EHS is characterized by loud noises or a perception of a large bang in one’s head when transitioning into or out of sleep, but is not dangerous.

Lead author of the study, Betul Rauf, said people may perceive EHS as ‘proof’ of aliens. ‘EHS typically involves a bang or perception of an explosion in the transitions to or from sleep, but also includes visual elements e.g. flashes of light in around a third of cases.

‘These can be quite dramatic for sufferers.

‘Our findings suggest that the belief in aliens may be associated with sleep disturbances that produce sounds or images i.e. sleep paralysis and EHS.

‘It is possible that these strange hallucinations associated with sleep could be interpreted as evidence for the existence of aliens or other supernatural beings.

‘They may even be perceived as “proof” of direct contact with these beings.’

For the research, which was conducted with the help of BBC Science Focus magazine, participants were asked six questions about what they believed about the paranormal.

They had to rate, on a scale, their beliefs, ranging from ‘definitely not’ to ‘definitely yes’.

They were also asked a series of questions about their sleep, e.g. whether they had had difficulties falling asleep, staying asleep or waking up too early in the past two weeks.

The researchers found that generally, across all of the paranormal beliefs, the greater the belief, the worse their sleep was.

However, while a greater belief that the soul lives on after death was linked to an increased likelihood of experiencing insomnia, those who reported the absolute strongest beliefs here reported fewer insomnia symptoms.

Green alternatives to burial and cremation could be on the way

Parents can now monitors where their children are on new app

Seat by seat, scientists reveal risk of dying in an airplane crash

'Singing' ice: Listen to the 'alien' sounds at Earth's poles

Turkey earthquake map: Where in Syria and Turkey did the quake hit?