The science of love: Copying body language on a date does NOT indicate attraction but ‘sweating in sync’ does, study reveals

We’re often told that copying body language and mannerisms on a first date are surefire signs that your date is interested in you.

But according to researchers in the Netherlands, in-sync sweating and heart rates are much better indicators of a romantic attraction.

In a blind date setting, experts fitted male and female participants with eye-tracking glasses and other devices to measure behavioural and physiological signals.

A stronger indicator of attraction was ‘physiological synchrony’ — in-sync sweating and heart rates — which they say is ‘a precursor of deeper emotional understanding’.

These biological signals, which are covert, unconscious and difficult to regulate, may help people ‘align emotionally’ when they first meet, the researchers say. 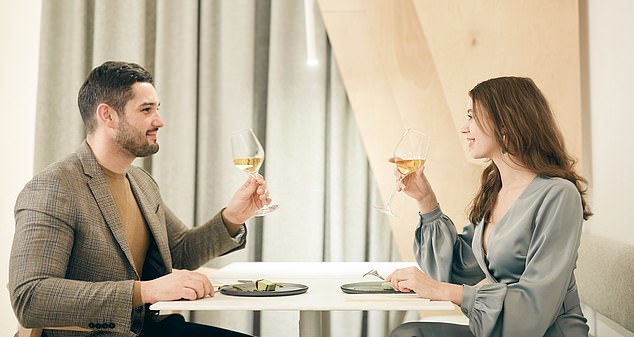 In-sync sweating and heart rates are much better indicators of attraction than copying body language and mannerisms on a blind date, say experts at Leiden University, the Netherlands (stock image)

The study was led by Eliska Prochazkova, a researcher at Leiden University in the Netherlands, and published in Nature Human Behaviour.

‘Humans are social animals whose well-being is shaped by the ability to attract and connect with one another, often through brief interactions,’ Prochazkova and colleagues say in the paper.

‘Here, we measured the physiological dynamics between pairs of participants during real-life dating interactions outside the laboratory.

‘We found that overt signals such as smiles, laughter, eye gaze or the mimicry of those signals were not significantly associated with attraction.

‘Instead, attraction was predicted by synchrony in heart rate and skin conductance between partners, which are covert, unconscious and difficult to regulate.

If you’ve been having trouble finding love on dating apps, you might want to try dating one of your friends, a 2021 study suggests.

The study authors, based in Canada, looked at data from just under 2,000 couples of different demographics.

They found two thirds started out as just friends, suggesting that establishing a platonic connection with someone first is conducive to a solid romantic relationship later.

The study suggests the cliché of falling in love at first site – frequent in Hollywood movies of the silver screen – may be outdated in the 21st century.

‘Our findings suggest that interacting partners’ attraction increases and decreases as their subconscious arousal levels rise and fall in synchrony.’

In a world of online dating, the question of what defines attraction has never been more relevant, the researchers claim.

But what people really seek in a partner is a ‘gut feeling of connection’, expressed as a sensation in the body, which is more likely to occur during face-to-face interactions.

To define what drives the feeling of attraction, the researchers built a pop-up blind dating laboratory, at different social events in the Netherlands, including arts and music festivals.

A blind date is a stressful context that likely induces strong physiological reactions, they say, which is a desirable state for physiological synchrony.

In total, 140 males and females (all single and between the ages of 18 and 37), who had never met before, entered their specially created ‘dating cabin’ and sat at a table fitted with a large visual barrier.

The visual barrier initially obscured their view of each other, but then opened for three seconds, allowing them to form a first impression of their partner.

The barrier then closed, and participants rated their partner on attraction on a zero to nine point scale.

After each interaction, the barrier closed and participants rated their partner on the same scales again.

Meanwhile, participants’ heart rate and electrodermal activity — changes in the resistance of the skin to a small electrical current based on sweat gland activity — was recorded with two BIOPACs.

Throughout the experiment, Tobii eye-tracking glasses (pictured) measured participants’ gaze fixations and expressions. This was compared with heart rate and electrodermal activity — changes in the resistance of the skin to a small electrical current based on sweat gland activity

At the end of the experiment, participants could decide whether they wanted to go on another date with their partner.

They found that attraction was linked with physiological synchrony between partners regardless of whether the couples were allowed to speak or had to remain silent.

They researchers stress that they’re not suggesting in-sync smiling, laughing or face-to-face gazing does not play a role in attraction — just that physiological synchrony is more strongly linked.

Overall, the findings show provide a glimpse of the deep-seated biological responses that can occur during a face-to-face encounter.

In comparison, judging a potential romantic partner based on written or visual stimuli (such as personal ads or photos in an app) does not predict attraction during a first date, previous research suggests.

‘The current findings are particularly relevant from the perspective of our modern romantic landscape where affective exchange is reduced to quick encounters between strangers,’ the researchers conclude.

UNSATISFACTORY RELATIONSHIPS ARE AS BAD FOR YOU AS SMOKING, SCIENTISTS CLAIM

If you’re stuck in a dissatisfying marriage, recent research from Israel suggests you should get a marriage therapy or risk being put in an early grave.

Exploring extensive health data going back more than 30 years, a team from Tel Aviv University tracked the deaths and causes of death of more than 10,000 Israeli men.

Being unhappy with your marriage, or even perceiving your marriage as bad, made the men as likely to die from cerebrovascular (CVA) conditions, such as stroke, or blocked arteries at the same rate as smoking and a lack of physical activity.

Those men who felt their marriage was unhappy were 69.2 per cent more likely to die from stroke than those who were happy in their marriage, authors found.

When considering all cases of premature death among the men, the rate of death was 19 per cent higher in men who said their marriage was unsatisfactory.

The study authors said health authorities should promote marriage therapy as a way to improve men’s health and help them live longer.

‘Our study shows that the quality of marriage and family life has health implications for life expectancy,’ said study author Dr Shahar Lev-Ari.

As part of the study, published in the Journal of Clinical Medicine,  the researchers conducted statistical analyses of a database that started gathering data in the 1960s.

For 32 years, they tracked the health and behaviour of 10,000 men, all Israeli state employees, paying close attention to death from stroke.

At the beginning of the study, most of the participants were in their 40s and since it started in the 1960s a total of 64 per cent died from a range of illnesses.

‘We wanted to analyse the data gathered longitudinally using various parameters to identify behavioural and psychosocial risk factors that can predict death from a CVA and premature death for any reason,’ said study author Dr Shahar Lev-Ari.

Early on in the 32-year long study, participants were asked to rank their level of marriage satisfaction on a scale of 1, very successful) to 4, unsuccessful.

A less dramatic increase of 6.5 per cent was seen in older study participants.

‘At a higher age, the gap is smaller, perhaps due to processes of adjustment that life partners go through over time,’ according to Lev-Ari.

In addition, the researchers conducted a statistical analysis of all known risk factors contributing to death from cardiovascular diseases, such as diabetes, hypertension, excessive BMI, and socioeconomic status.

They found that the relative risk for death for any reason among the unhappily married versus the happily married was 1.21 higher among those dissatisfied with their marriages.

This rates is similar to data in the literature regarding smokers and those leading a sedentary life, the team explained.

‘These findings were consistent with other studies that have shown the effectiveness of educational programs fostering good life partnerships as part of a national strategy to promote health and wellness for the public at large,’ said Lev-Ari.

at&t, in, indicates, sweating?, sync
You may also like: