We all love to get in the Christmas spirit and spread a bit of festive cheer.

But now a new study suggests that doing so can have a positive impact on your mental health and wellbeing.

That’s because taking part in a carol service makes you happier, researchers claim.

More than 1,000 people attending Christmas services at Liverpool Cathedral were surveyed before the service and again just before it ended, using the widely-used psychometric scale, the Oxford Happiness Inventory.

Overall, people scored significantly higher in the second test than the first, suggesting that attendance at the service made the participants happy and had a big impact on their mental health and wellbeing. 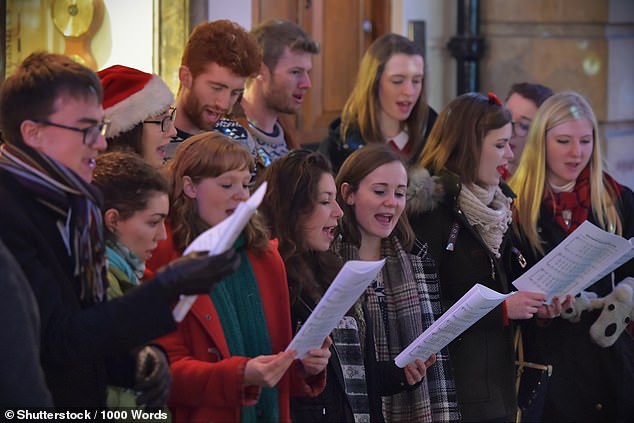 The Dean of Liverpool, the Very Reverend Sue Jones, said: ‘I am really encouraged by these findings. We say that the cathedral is a place of encounter — a place to encounter the God who knows and loves us and a place in which people can feel affirmed and loved.

‘And now we know that works; not just for churchgoers, but for all the people of Liverpool.’

She added: ‘The cathedral is adding something to Liverpool’s sense of wellbeing. And I praise God for that.’

The research team led by the University of Warwick tested 383 people before and after the Holly Bough Service, held on the Fourth Sunday in Advent, at Liverpool Cathedral in 2019, and then applied the same wellbeing measure to 802 people attending Christmas carol services in that same year.

In the test, participants were asked to respond to the same 29 statements before and after the service such as:

The results showed that the Christmas carol services had a positive impact on those attending, researchers said.

Previous research into attendance at cathedrals found that visitors identified the benefits of peace and quiet and of connecting spiritually and emotionally. 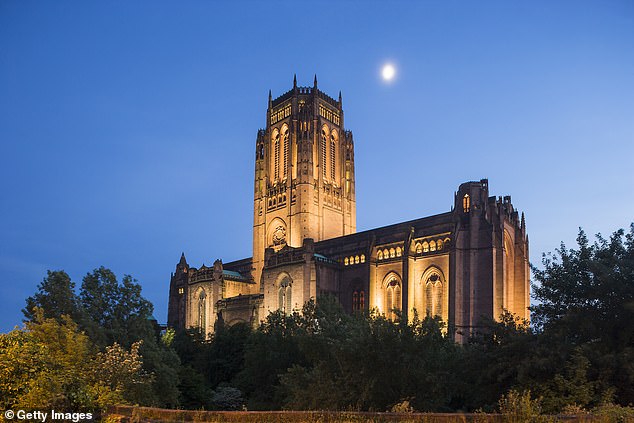 Research: More than 1,000 people attending Christmas services at Liverpool Cathedral (pictured) were surveyed before and after the service using a widely-used psychometric scale

One study looked at visitors to three different environments (a cathedral, castle and shopping centre), and reported that for some, visiting the cathedral impacted their sense of self-esteem.

This latest paper is part of broader research into the positive impact of Anglican cathedrals on their local communities and the relationship between religion and happiness.

Co-author Leslie Francis, professor of religions and psychology at the University of Warwick, and Canon Theologian at Liverpool Cathedral, said: ‘Liverpool Cathedral is committed to using the best scientific tools to evaluate its mission and ministry and to use that evidence to shape its priorities for the future.’

He added: ‘It is important to test the research in peer-review journals before inviting the church to take it seriously and I am pleased to say these findings can be taken seriously.

‘But, as a scientist, further research is always needed to test and build on findings and we look forward to examining Christmas in other cathedrals, as well as other highlight events and services at different times throughout the year in Liverpool Cathedral.’

The study has been published in the journal Theological Studies.

Across six studies two researchers, Dr Shai Davidai from the New School for Social Research and Professor Thomas Gilovich of Cornell University, examined the idea that deepest regrets come from not pursuing our most ambitious dreams.

They found that the these deep-rooted regrets stem from such things as not pursuing a loved one, abandoning hopes of playing a musical instrument and not travelling the world.

These relate to what is dubbed a person’s ‘ideal-self’ – the image every person has in their head of who they are and the type of person they want to be.

Other examples included (ages of anonymous volunteers in brackets):

• ‘My freshman year of college I was offered an incredible opportunity to do my own research in two different countries. I didn’t go because my family didn’t want me to go and I had concerns over finances to do with my apartment, funding it and my pet’ (22 years old)

• ‘My biggest regret was not going to graduate school when I had the opportunity. I have found success elsewhere and raised my family how I wanted to, but I have always regretted not going’ (54 years old)

• ‘My biggest regret in life was not pursuing my dream of singing. I followed a traditional route instead and became a teacher. The dream remains… the what if!’ (62 years old)

• ‘I regret not having gotten involved in anything extracurricular during my high school years. I was in the national honour society but that hardly counts (33 years old)

• ‘I regret not keeping in touch with my best friend in college. It pains me that we lost touch’ (26 years old)

• ‘I think that I did not pursue a career in acting when I was younger. I feel like I gave up on my dream because doubts others had. I wish I could go back in time and tell my younger self to believe in my talent more.’ (35 years old)

• ‘The biggest regret was to remarry and leave a job, home and state I was happy with. I made a terrible mistake and gave up way to much to alleviate a loneliness I was feeling. What a fool I was’ (71 years old)

• ‘Many years ago when my husband and I first married, we nearly bought our dream house. It wasn’t ideal but we loved it. We decided not to buy it as we felt pressure from our parents. I regret not stepping up, being an adult and going with my gut feeling. I regret letting our parents influence us so much. I also regret it because not only would it have been a great investment.’ (46 years old)