Meet Tarantobelus jeffdanielsi: Newly-discovered tarantula-killing WORMS are named after actor Jeff Daniels in honour of his role in the 1990 film ‘Arachnophobia’

A newly-discovered species of tarantula-killing nematode worm has been named in honour of the actor Jeff Daniels, who starred in the 1990s film ‘Arachnophobia’.

‘His character in the film is a spider killer, which is exactly what these nematodes are,’ said parasitologist Adler Dillman, who led the team that discovered the worm.

While Mr Daniels’ Dr Jennings in the comedy–horror flick dispatches his eight-legged foes with electricity, fire and guns, his new namesake infects the spiders’ mouths.

‘Tarantobelus jeffdanielsi’ both paralyses the tarantula’s fang-moving organs and influences their behaviour — stopping them from eating so they eventually starve.

It’s unclear how long T. jeffdanielsi can live on a spider, but in the lab they survived for 11 days. The worms are self-fertilizing hermaphrodites that each make 160 babies.

A newly-discovered species of tarantula-killing nematode worm (pictured) has been named in honour of the actor Jeff Daniels, who starred in the 1990s film ‘Arachnophobia’. ‘His character in the film is a spider killer, which is exactly what these nematodes are,’ said parasitologist Adler Dillman, who led the team that discovered the worm 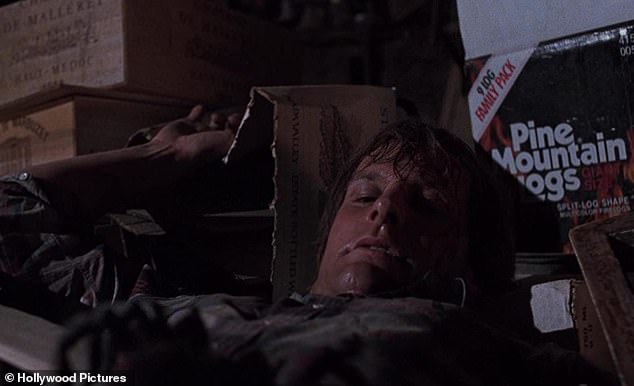 While Mr Daniels’ character in the comedy–horror flick (pictured) dispatches his eight-legged foes with electricity, fire and guns, his new namesake infects the spiders’ mouths. From here, ‘Tarantobelus jeffdanielsi’ both paralyses the tarantula’s fang-moving organs and influences their behaviour — stopping them from eating so they starve

‘When I first heard a new species of nematode had been named after me, I thought: “Why? Is there a resemblance?”,’ joked Mr Daniels, in remarks to UCR.

‘Honestly, I was honoured by their homage to me and Arachnophobia. Made me smile,’ the actor added.

‘And of course, in Hollywood, you haven’t really made it until you’ve been recognized by those in the field of parasitology,’ he quipped.

While nematodes are among the most abundant animals on the Earth — and are represented by a whopping 25,000-odd different species — this is only the second time that a species has ever been found to infect tarantulas.

T. jeffdanielsi was discovered after a wholesale tarantula breeder contacted Professor Dillman back in the September of 2019, seeking help in identifying a mysterious infection that was affecting some of their spiders.

When tarantulas are infected by T. jeffdanielsi, they exhibit strange behaviours, the researchers explained — such as walking around tiptoe  and not eating — while their pedipalps, the appendages that control their fangs, also stop working.

‘If they get this infection, [tarantulas] will die of starvation,’ said Professor Dillman.

However, the University of California, Riverside parasitologist noted, this ‘may take months, because tarantulas don’t have to eat particularly often.’

On inspecting some of the infected specimens, the expert noticed that each had an unusual but distinctive white mass present around their mouths — one he recognised immediately as being made up of nematode worms.

Further analysis revealed that the parasites were exclusively infecting the spider’s mouths — with none found in the tarantulas’ stomachs, and there being no signs that the worms had damaged the arachnids’ exteriors either.

‘It isn’t clear that the nematodes feed on the spider itself. It’s possible that they feed on bacteria that live on the tarantulas,’ Professor Dillman said.

This second hypothesis is bolstered, the researchers explained, by the fact that when they grew the worms in the laboratory, they found that they ate E. coli. 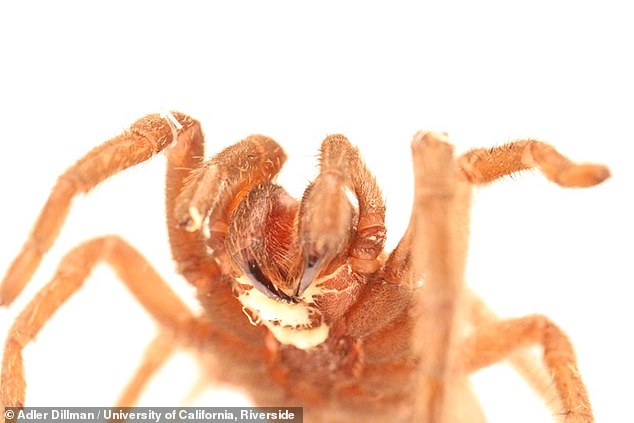 On inspecting some of the infected specimens, Professor Dillman noticed that each had an unusual but distinctive white mass present around their mouths (as pictured)— one he recognised immediately as being made up of nematode worms

According to Professor Dillman, the fact that this is only the second tarantula-infecting nematode ever discovered is probably down more to the limited number of people that study the spiders, rather than the uniqueness of the parasites.

‘Nematodes have been around for hundreds of millions of years. They’ve evolved to infect every kind of host on the planet including humans,’ he said.

‘Any animal you know of on planet Earth, there’s a nematode that can infect it.’

With their initial study complete, the team are now looking to understand how the worms alter the tarantula’s behaviour and paralyse their pedipalps — as well as developing ways that breeders could deal with or prevent T. jeffdanielsi infections.

The full findings of the study were published in the Journal of Parasitology.

Nematodes are a type of microscopic worm, and there are more than 25,000 known species of them.

Thousands of individual nematodes can be found in a handful of garden soil.

Some species can contain more than 27 million eggs at one time and lay more than 200,000 of them in a single day.

Their body is long and narrow, resembling a tiny thread – and this is the origin of the group’s name.

The word ‘nematode’ comes from a Greek word ‘nema’ that means ‘thread’.

The epidermis (skin) of a nematode is not composed of cells like other animals, but instead is a mass of cellular material and nuclei without separate membranes.

This epidermis secretes a thick outer cuticle which is both tough and flexible.

The cuticle is the closest thing a nematode has to a skeleton, and its used as a support and leverage point for movement.

Long muscles lie underneath the cuticle. These muscles are all aligned longitudinally along the inside of the body, so the nematode can only bend its body from side to side, not crawl or lift itself, so free-swimming nematode looks like it’s thrashing about aimlessly.