Telescope to launch in 2023 to search for habitable planets 'nearby'

Is there life at Alpha Centauri? Astronomers will launch a telescope into low-Earth orbit in 2023 to search for habitable planets orbiting our closest star system

The search for ‘another Earth’ has been a staple of science fiction for decades, and now a group of astronomers hope to discover one on our galactic doorstep.

Alpha Centauri is a triple star system just over four light years from the Earth, split into a pair of sun-like stars known as AB, and a red dwarf called Proxima Centauri.

So far planets have only been found orbiting Proxima Centauri, but experts from the University of Sydney and Breakthrough Initiatives believe they will find a world orbiting the larger binary pair using a new privately funded telescope.

Known as the Toliman mission, it will launch in 2023 and scan Alpha Centauri AB for worlds in the habitable zone, where liquid water can flow on the surface.

The team hope to be able to say whether there are habitable worlds orbiting either or both of the binary stars by the middle of this decade. 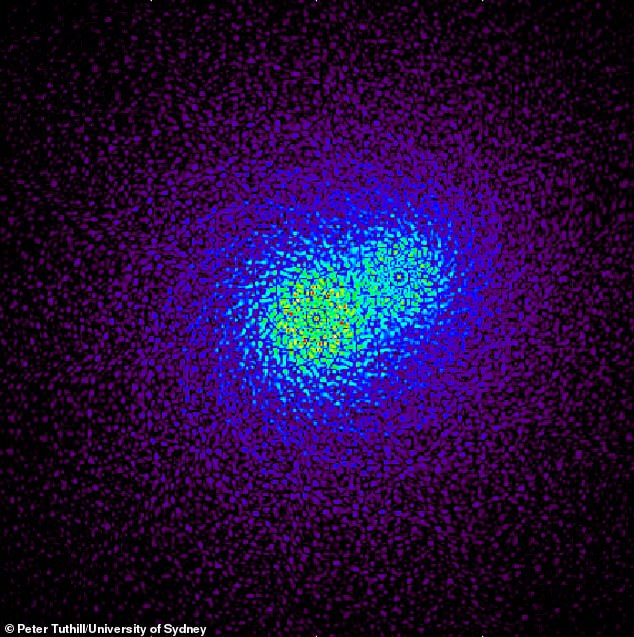 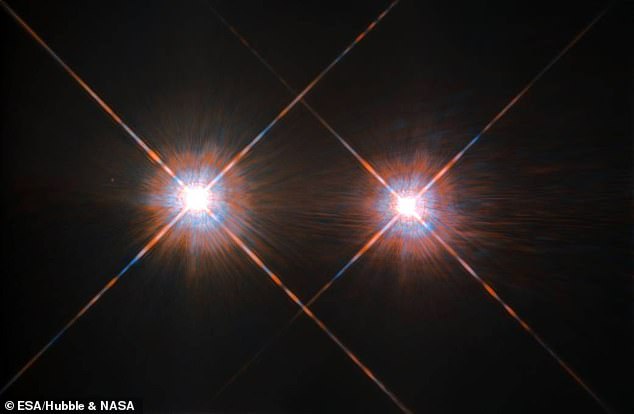 The closest star system to the Earth is the famous Alpha Centauri group. Located in the constellation of Centaurus (The Centaur), at a distance of 4.3 light-years, this system is made up of the binary formed by the stars Alpha Centauri A and Alpha Centauri B, plus the faint red dwarf Alpha Centauri C, also known as Proxima Centauri

Alpha Centauri is the closest star system to the Earth.

It includes three stars, two that are Sun-like in a binary pairing, and a third smaller red dwarf star.

The red dwarf, known as Proxima Centauri, is the closest star to the sun at 4.246 light years.

The binary pair includes Rigil Kentaurus, or Centauri A, and Toliman, also known as Centauri B.

Rigil Kentaurus has 1.1 times the mass and 1.519 times the luminosity of the Sun, while Toliman is smaller and cooler, at 0.907 times the Sun’s mass and 0.445 times its luminosity.

From the Earth they appear as a single larger star, called Alpha Centauri AB.

With an apparent magnitude of −0.27, it is the brightest star in the southern constellation of Centaurus and the third-brightest in the night sky, outshone by Sirius and Canopus.

Alpha Centauri C, or Proxima Centauri, is 0.21 light years from the binary pair.

Proxima Centauri has two planets: Proxima b, an Earth-sized exoplanet in the habitable zone discovered in 2016; and Proxima c, a super-Earth about 1.5 AU from the red dwarf star.

No planets have been confirmed around either Alpha Centauri A or B, but astronomers speculate there will be planets around one or both.

While the cost hasn’t been revealed, it will in part be funded by a $788,000 (£425,000) grant from the Australian government and includes work by NASA’s Jet Propulsion Laboratory and Saber Astronautics in Australia.

TOLIMAN stands for Telescope for Orbit Locus Interferometric Monitoring of our Astronomical Neighbourhood, but is also the ancient Arabic name for the star.

It is a new approach to exoplanet discovery, creating a telescope to focus on the nearest star systems, looking for potentially habitable worlds, instead of just any world.

The telescope uses a diffractive pupil lense – a mirror that spreads starlight captured from nearby stars into a complex flower-like pattern.

This pattern makes it easier to detect perturbances of star movements that are the tell-tale signs of orbiting planets.

‘Our nearest stellar neighbours – the Alpha Centauri and Proxima Centauri systems – are turning out to be extraordinarily interesting,’ said Dr Pete Worden, Executive Director of the Breakthrough Initiatives, which is funding the mission.

‘The TOLIMAN mission will be a huge step towards finding out if planets capable of supporting life exist there.’

Professor Peter Tuthill, leader of the project from the University of Sydney, said this will present a new window on the universe, including our nearest neighbour.

‘Astronomers have access to amazing technologies that allow us to find thousands of planets circling stars across vast reaches of the galaxy,’ he said.

‘Yet we hardly know anything about our own celestial backyard. It is a modern problem to have; we are like net-savvy urbanites whose social media connections are global, but we don’t know anyone living on our own block.’

Having such a blind spot in our understanding of the local universe has ‘important consequences’ for astronomy, according to Prof Tuthill.

‘These next-door planets are the ones where we have the best prospects for finding and analysing atmospheres, surface chemistry and possibly even the fingerprints of a biosphere – the tentative signals of life,’ he added.

The team believe that either or both of the two stars in Alpha Centauri AB may host temperate planets – those with flowing water that could host life.

The third star, Proxima Centauri, is already believed to have one planet in a ‘Goldilocks orbit’, discovered in 2016.

Breakthrough Initiatives, founded by Israeli science and technology investor and philanthropist Yuri Milner, which is supporting the mission, has a number of programs engaged in the hunt for alien life throughout the universe.

Its Starshot mission hopes to one day send a fleet of tiny probes to Alpha Centauri, flying using lightsails – a mission that will take 20 years from launch, and four years to send any information back to the Earth. 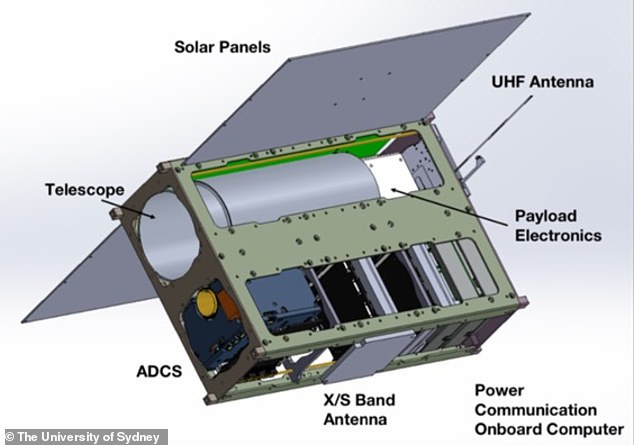 Proposed TOLIMAN mission telescope design. The team believe that either or both of the two stars in Alpha Centauri AB may host temperate planets – those with flowing water that could host life 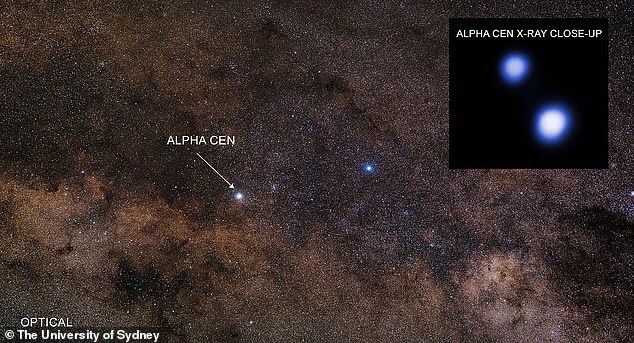 Our closest neighbours: Alpha and Proxima Centauri are just four light years away, here photographed in visible and x-ray spectra

It is our nearest star system and offers perhaps the best chance of finding alien life – but reaching Alpha Centauri with current technology would take thousands of years.

The good news is scientists may just have found a way to get there in the space of a human lifetime.

It involves a laser-powered sail they claim could one day allow us to travel 24 trillion miles and reach our closest stellar neighbour within 20 years.

The new type of spacecraft propulsion system has been designed by scientists from the Australian National University (ANU).

The Breakthrough Starshot project calls for the design of an ultra-lightweight spacecraft, which acts as a light-sail, to travel with unprecedented speed to the triple star system 4.37 light-years away.

While that is a large distance in terrestrial terms, it is three times closer than the next nearest Sun-like star.

The concept would see probes launched into space by the laser propulsion system.

Light to power the sail would come from the Earth’s surface – with millions of lasers joining forces to illuminate the sail and push it onto its interstellar journey.

Other projects, including TOLIMAN, have been designed to find planets and search for life in our stellar neighbourhood.

‘If we consider the nearest few dozen stars, we expect a handful of rocky planets like Earth orbiting at the right distance for liquid surface water to be possible.’

Saber Astronautics will provide spaceflight mission operations support, including satellite communications and command, space traffic management and a range of other flight services to download data from the satellite.

Dr Jason Held, CEO of Saber Astronautics, said: ‘TOLIMAN is a mission that Australia should be very proud of – it is an exciting, bleeding-edge space telescope supplied by an exceptional international collaboration. It will be a joy to fly this bird.’

Dr Eduardo Bendek, a member of the team from NASA’s Jet Propulsion Laboratory, said it is a huge technological challenge finding planets orbiting even the nearest and brightest stars in our galactic neighbourhood.

‘Our TOLIMAN mission will launch a custom-designed space telescope that makes extremely fine measurements of the position of the star in the sky. If there is a planet orbiting the star, it will tug on the star betraying a tiny, but measurable, wobble.’

Most of the thousands of known planets outside the solar system have been discovered using space telescopes such as NASA’s Kepler and TESS missions.

Finding exoplanets close to home will take more finely tuned instruments, which is where the TOLIMAN mission comes in.

Mr Klupar said: ‘The signal we are looking for requires a real leap in precision measurement.’

Professor Tuthill added: ‘Nobody is underestimating the challenge, but our innovative design incorporates new tricks. Our plan is for an agile, low-cost mission that delivers results by about the middle of the decade.’ 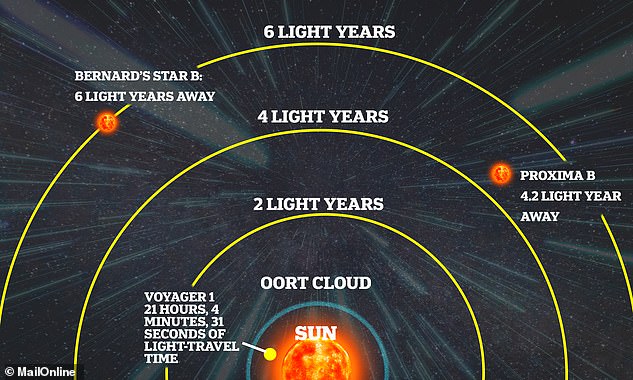 Pictured, a not-to-scale representation of how far away Proxima B is from Earth compared to Voyager 1, the farthest man-made object which was launched in 1977

The project involves deploying thousands of tiny spacecraft to travel to our nearest star system and send back pictures.

If successful, scientists could determine if Alpha Centauri, a star system about 25 trillion miles away, contains an Earth-like planet.

The catch: It could take years to develop the project, dubbed Breakthrough Starshot, and there is no guarantee it will work.

The small light-propelled vehicles will carry equipment like cameras and communication equipment.

This involves a ground-based light beamer pushing ultra-light nanocrafts – miniature space probes attached to lightsails – to speeds of up to 100 million miles an hour.

Such a system would allow a flyby mission to reach Alpha Centauri in just over 20 years from launch.

Breakthrough Starshot aims to demonstrate proof of concept for ultra-fast light-driven nanocrafts, and lay the foundations for a first launch to Alpha Centauri within the next generation. Along the way, the project could generate important supplementary benefits to astronomy, including solar system exploration and detection of Earth-crossing asteroids.

Scientists hope the vehicles, known as nanocraft, will eventually fly at 20 per cent of the speed of lightt.

‘The thing would look like the chip from your cell phone with this very thin gauzy light sail,’ said Nasa’s Pete Worden

He envisions sending a larger conventional spacecraft containing thousands of nanocraft into orbit, and then launching the nanocraft.

If they reach the star system and succeed in taking photographs, it would take about another four years to transmit them back.