Cell phone footage shows the moment that a Tesla’s Autopilot system brought a Model S to a stop after its allegedly drunk driver fell asleep at the wheel on a highway in Norway.

The high tech system detected that the 24-year-old driver was no longer responsive after he nodded off – allegedly after a night of drinking.

Cell phone footage shot by another motorist shows the man slumped over in the driver’s seat as the car drives itself.

The Autopilot system kept the car in its lane and away from other vehicles on the road before coming to a stop in a tunnel.

The Eastern Police District released a statement on its Twitter account saying the man was drunk and denied driving ‘although there is video of him in the car.’

Tesla’s Autopilot may have prevented a deadly crash when the technology brought a Model S to stop after detecting the driver, who was intoxicated, was no longer responsive

Tesla’s Autopilot is an advanced driver assistance system that matches the speed of the Tesla with surrounding traffic, keeps the vehicle in its lane and guides the car through lane changes and ramps.

The technology also automatically engages the turn signal and takes the correct exit – all of these functions may have saved the life of the Norwegian man and those in surrounding vehicles.

The video of the intoxicated driver, who’s identity has yet to be revealed, was published on Twitter, which shows him in the front seat of a white Model S driving down the highway and toward the Nøstvet tunnel, according to Electrek.

Once inside the tunnel, the Autopilot stops the vehicle and turns on its hazard lights, all while the drive is still asleep at the wheel. 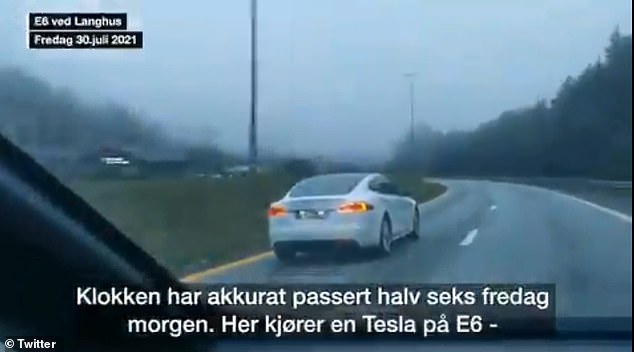 The incident occurred on a highway in Norway on Friday, when a 24-year-old man got behind the wheel after a night of drinking and feel asleep while the vehicle was still in motion

The video of the intoxicated drive was published on Twitter, which shows him in the front seat of a white Model S that is driving down the highway and toward the Nøstvet tunnel

This is not the first such incident when an intoxicated driver was found asleep inside a moving Tesla.

A California man was arrested in November 2018 in Palo Alto while in his gray Model S after police officers found him passed out at the wheel.

Cops followed the car after spotting the Tesla driving south on Highway 101 at 70 mph while it looked like the driver was passed out behind the wheel.

In order to get the car to stop a California Highway Patrol officer had to get in front of the Tesla to make it slow down and eventually pull over at a gas station.

Although the Autopilot system worked as it should during these potentially fatal incidents, another Tesla driver had a bizarre experience last month when the system mistook the moon for an amber traffic light and slowed the car down as a response. 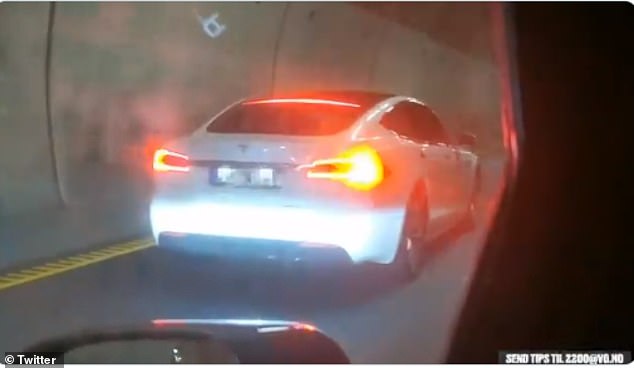 Once inside the tunnel, the Autopilot stops the vehicle and turns on its hazard lights, all while the drive is still asleep at the wheel

Jordan Nelson posted a video on Twitter showing the flaw in action during an evening drive in Granite Falls, North Carolina. It remains unclear which model of Tesla he drives.

In the video, the moon can be seen low, bright and yellow in the night sky.

However, the console on the dashboard shows an amber traffic light flickering on the screen, indicating the Autopilot system has been tricked.

He wrote: ‘Hey Elon Musk, you might want to have your team look into the moon tricking the autopilot system.

‘The car thinks the moon is a yellow traffic light and wanted to keep slowing down.’

Musk, who is the co-founder of Tesla, is yet to reply to the tweet.

The Autopilot does not function well in poor visibility (due to heavy rain, snow, fog, etc.), bright light (due to oncoming headlights, direct sunlight, etc.), mud, ice, snow, interference or obstruction by objects mounted onto the vehicle (such as a bike rack), obstruction caused by applying excessive paint or adhesive products (such as wraps, stickers, rubber coating, etc.) onto the vehicle; narrow, high curvature or winding roads, a damaged or misaligned bumper, interference from other equipment that generates ultrasonic waves, extremely hot or cold temperatures.

Tesla is no longer the world's largest electric vehicle maker