Watch the ‘Great Eruption’ of a massive star! Incredible visualisation shows the famous 1843 stellar explosion in the Eta Carinae system that briefly made it the second-brightest object in the sky

The star system of Eta Carinae is famous for its ‘Great Eruption’, an outburst that — for three days in March 1843 — made it the second-brightest object in the sky.

The flare-up was so luminous, in fact, that it became a staple beacon of navigation for Victorian mariners in the southern hemisphere from 1837 into the 1850s.

Now, an incredible visualisation from NASA has revealed in stunning detail the hourglass-shaped nebula and surrounding gas clouds released by the explosion. 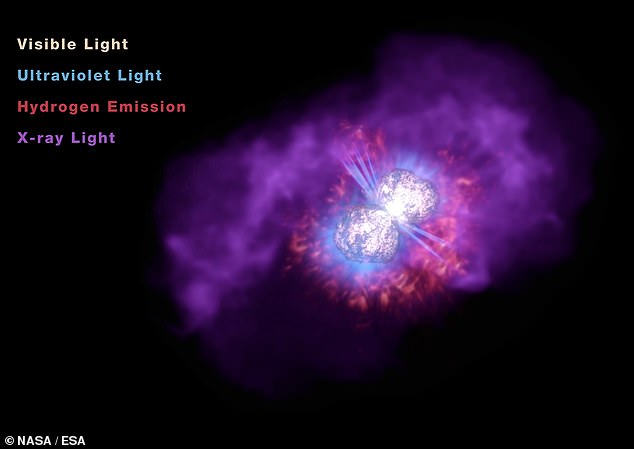 The star system of Eta Carinae is famous for its ‘Great Eruption’, an outburst that — for three days in March 1843 — made it the second-brightest object in the sky.  Now, an incredible visualisation from NASA (pictured) has revealed in stunning detail the hourglass-shaped nebula and surrounding gas clouds released by the explosion

According to NASA experts, Eta Carinae — which lies some 7,600 light years from Earth — is one of the most massive star systems known.

This is why it is so prone to outbursts like the Great Eruption seen in the 1830s–50s.

Eta Carinae will end its life by collapsing down into a black hole — probably accompanied by an intense supernova explosion.

The visualisation was created by astronomer Frank Summers of the Space Telescope Science Institute in Baltimore, Maryland and his team of researchers and artists for NASA’s Universe of Learning program.

‘The team did such an amazing job representing the volumetric layers that viewers can immediately and intuitively comprehend the complex structure around Eta Carina,’ said Professor Summers.

‘We can not only tell the story of the Great Eruption, but also showcase the resulting nebula in three dimensions.’

Looking at Eta Carinae in different wavelengths reveals, in the visible spectrum, the twin lobes of the Homunculus nebula that was spewed out during the Great Eruption and, in the ultraviolet, some of the light being emitted from the stars within.

(Together, the stellar binary have a luminosity that is more than five million times that of the Sun — and the system would appear brighter in our sky today if it were not for the cloud of gas and dust in the surrounding nebula that obscures it from view.)

Around the nebula can also be seen the characteristic emissions of hydrogen gas that was also released during the outburst, along with X-ray emissions that are indicative of the Great Eruption having had a high-energy component.

Motions in these outer layers, the team said, reveal that Eta Carinae has, in fact, had multiple explosive outbursts.

The system shines far brightest, however, at longer wavelengths, the researchers explained, as the Homunculus Nebula absorbs the light from the stars and the re-radiates it out as infrared light.

In fact, in the infrared part of the spectrum, Eta Carinae is the brightest source of light in the whole night sky — and this radiation, the team said, impacts the larger Carina Nebula, the vast star-forming region in which the system resides.

‘Spitzer’s infrared image lets us peer through the dust that obscures our view in visible light to reveal the intricate details and extent of the Carina Nebula around this brilliant star,’ said team member and visualisation scientist Robert Hurt of Caltech. 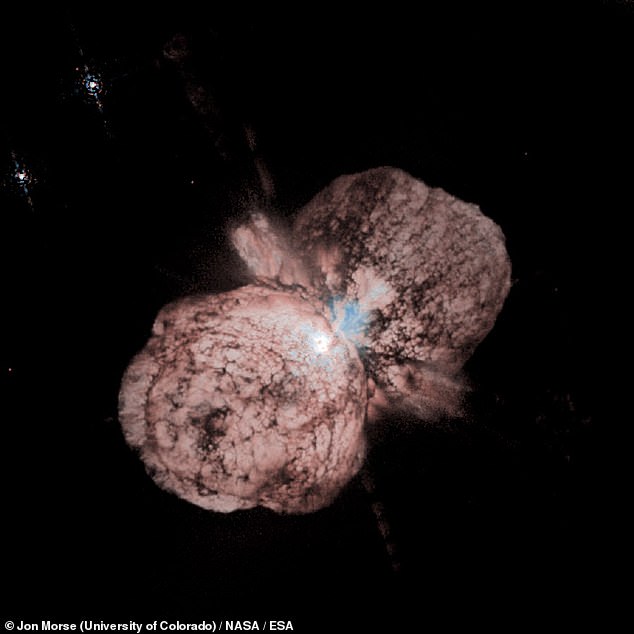 ‘The team did such an amazing job representing the volumetric layers that viewers can immediately and intuitively comprehend the complex structure around Eta Carina,’ said astronomer Frank Summers of the Space Telescope Science Institute in Baltimore. Pictured: the Homunculus Nebula around Eta Carina can be seen in the visible spectrum

According to NASA, the visualisation and its associated assets will be used to promote astronomy-themed learning.

‘We can take these models like the one for Eta Carinae and use them in 3D printing and augmented reality programs,’ said team member and visualisation scientist Kim Arcand of the Chandra X-ray Center in Cambridge, Massachusetts.

‘This means more people can put their hands on the data — literally and virtually —and this makes for better learning and engagement.’

More info on the visualisation can be found on the NASA’s Universe of Learning and Hubble Space Telescope websites.

Eta Carinae, located about 7,500 light-years away in the southern constellation of Carina, is famous for a 19th century outburst that briefly made it the second-brightest star in the sky.

Eta Carinae has had a violent history, prone to chaotic eruptions that blast parts of itself into space like an interstellar geyser.

In the mid-1800s, mariners sailing the southern seas navigated at night by a brilliant star in the constellation Carina. The star, named Eta Carinae, was the second brightest star in the sky for more than a decade.

Those mariners could hardly have imagined that by the mid-1860s the brilliant orb would no longer be visible. Eta Carinae was enveloped by a cloud of dust ejected during a violent outburst named ‘The Great Eruption.’

This event also ejected a massive hourglass-shaped nebula, but the cause of the eruption remains poorly understood.

One explanation for the monster star’s antics is that the convulsions were caused by a complex interplay of as many as three stars, all gravitationally bound in one system.

In this scenario, the most massive member would have swallowed one of the stars, igniting the massive Great Eruption of the mid-1800s. Evidence for that event lies in the huge, expanding bipolar lobes of hot gas surrounding the system.

The system contains a pair of massive stars whose eccentric orbits bring them unusually close every 5.5 years. They contain 90 and 30 times the mass of our Sun and pass 140 million miles (225 million kilometers) apart at their closest approach — about the average distance separating Mars and the Sun.

Because of Eta Carinae’s violent history, astronomers have kept watch over its activities. Although Hubble has monitored the volatile superstar for 25 years, it still is uncovering new revelations.