The moons of rogue exoplanets that don’t have stars could have water and be a good place to find LIFE, researchers say

Humanity has yet to find extraterrestrial life, but a new study suggests that the exomoons of ‘rogue planets’ could be a good place to look.

The research notes that rogue exoplanets – planets outside the Solar System that are not associated with a star – that have their own moon could have conditions that are ripe for atmospheres and liquid water, thanks to cosmic radiation and the planet’s tidal forces.

Tidal forces from the planet on the moon could be a source of heat to keep the water in a liquid state, the researchers said in a statement.

If carbon dioxide is 90 percent of the moon’s atmosphere, there could be a great enough greenhouse effect to retain the heat and keep the water liquid.

‘Together, these energy sources would suffice to keep water in the liquid state.’

It’s unclear how many rogue exoplanets there are, but ‘conservative estimates’ suggest the Milky Way hosts ‘at least as many Jupiter-sized orphan planets as there are stars,’ the statement added.

The Milky Way has more than 100 billion stars, making it a strong possibility there are over 100 billion of these so-called planetary nomads.

The study has been published in the International Journal of Astrobiology.

Exomoons have yet to be officially discovered, although the first candidate was identified in October 2018. 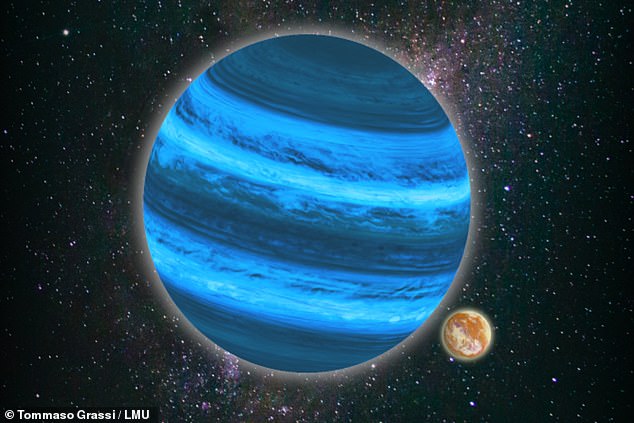 An illustration of a ‘rogue exoplanet’ (blue, pictured) not attached to a star, but with an exomoon (orange, pictured) that could support life. 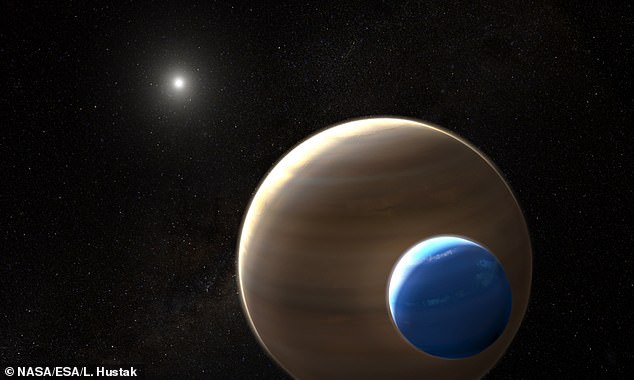 NASA’s Hubble and now retired Kepler telescopes discovered the first evidence of an exomoon several years ago, more than 8,000 light-years from Earth. It has yet to be confirmed, though

It was discovered by both the Hubble and the now-retired Kepler Space Telescopes.

Six other exomoon candidates were thought to be discovered in June 2020. 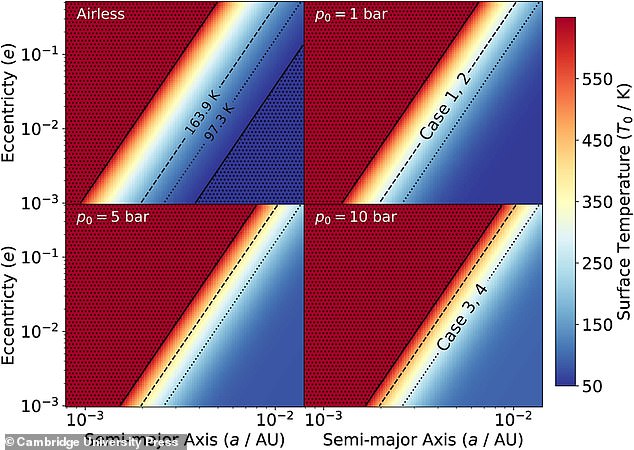 Tidal forces from the planet on the moon could be a source of heat to keep the water in a liquid state, the researchers suggest

If carbon dioxide is 90 percent of the moon’s atmosphere, there could be a great enough greenhouse effect to retain the heat and keep the water liquid

The new research added that if water is able to form in a significant amount on the atmosphere, it could be held in a liquid form.

The amount of water would be 10,000 times smaller than the volume of Earth’s oceans, but 100 times more than what’s found in our planet’s atmosphere.

‘This would be enough to enable live to evolve and thrive,’ the statement added.

‘The presence of water on the surface of the exomoon, affected by the capability of the atmosphere to keep a temperature above the melting point, might favor the development of prebiotic chemistry,’ the authors wrote in the study.

‘Under these conditions, if the orbital parameters are stable to guarantee a constant tidal heating, once water is formed, it remains liquid over the entire system evolution, and therefore providing favorable conditions for the emergence of life.’

This is not the first time that exomoons have been suggested as capable of having liquid water and supporting life.

In June 2019, astrophysicist at the U.K.’s University of Lincoln Dr. Phil Sutton said exomoons ‘can be internally heated by the gravitational pull of the planet’ and thus ‘offer a promising avenue to finding extra-terrestrial life.’

Several moons in the Solar System are believed to have subterranean oceans, which may be home to life – Saturn’s Enceladus, and Jupiter’s Ganymede, Callisto and Europa.

Earlier this month, NASA’s Juno spacecraft released close-up photos of Ganymede, as it flew just 645 miles within the celestial satellite.

It’s believed there may be as many as 100 exoplanets with exomoons, according to Space.com.

Since then other types of pulsars that emit X-rays and gamma rays have also been spotted.

Pulsars are essentially rotating, highly magnetised neutron stars but when they were first discovered it was believed they could have come from aliens.

In 1977, an astronomer looking for alien life in the night sky above Ohio spotted a radio signal so powerful that he excitedly wrote ‘Wow!’ next to his data.

In 1977, an astronomer looking for alien life in the night sky above Ohio spotted a radio signal so powerful that he excitedly wrote ‘Wow!’ next to his data

The 72-second blast, spotted by Dr Jerry Ehman through a radio telescope, came from Sagittarius but matched no known celestial object.

Conspiracy theorists have since claimed that the ‘Wow! signal’, which was 30 times stronger than background radiation, was a message from intelligent extraterrestrials.

In 1996 Nasa and the White House made the explosive announcement that the rock contained traces of Martian bugs.

The meteorite, catalogued as Allen Hills (ALH) 84001, crashed onto the frozen wastes of Antarctica 13,000 years ago and was recovered in 1984.

However, the excitement did not last long. Other scientists questioned whether the meteorite samples were contaminated.

They also argued that heat generated when the rock was blasted into space may have created mineral structures that could be mistaken for microfossils.

The star, otherwise known as KIC 8462852, is located 1,400 light years away and has baffled astronomers since being discovered in 2015.

It dims at a much faster rate than other stars, which some experts have suggested is a sign of aliens harnessing the energy of a star.

The star, otherwise known as KIC 8462852, is located 1,400 light years away and has baffled astonomers since being discovered in 2015 (artist’s impression)

Recent studies have ‘eliminated the possibility of an alien megastructure’, and instead, suggests that a ring of dust could be causing the strange signals.

Exoplanets in the Goldilocks zone in 2015

In February this year astronomers announced they had spotted a star system with planets that could support life just 39 light years away.

Seven Earth-like planets were discovered orbiting nearby dwarf star ‘Trappist-1’, and all of them could have water at their surface, one of the key components of life.

Three of the planets have such good conditions, that scientists say life may have already evolved on them.

Researchers claim that they will know whether or not there is life on any of the planets within a decade, and said: ‘This is just the beginning.’

exoplanets, moons, of, rogue, the
You may also like:

Cats are more susceptible to coronavirus infection than dogs