It took nearly three months, but Jody Pinder eventually succeeded. Endangered green sea turtles, usually shy, skittish and satisfied with a diet of sea grass and algae, were accepting handouts of squid that he and other local tour operators were providing at Bottom Harbor in the Bahamas.

“If you don’t feed them, they won’t come close enough for you to see them and photograph them,” Mr. Pinder said.

Before the pandemic, Mr. Pinder and others had been selling this assured adventure to a booming population of tourists. Day after day, boats would flock to Bottom Harbor and tourists would hop into its shallow turquoise waters holding squid morsels in their hands or on wooden skewers. The turtles would then grab the snacks as the visitors snapped Instagram-worthy images.

Those who don’t take care sometimes find themselves getting bitten by the aquatic animals, who may mistake human toes and fingers for another snack.

The practice is known as provisioning, and it’s an easy meal for the shelled creatures. But conservation biologists have expressed concern in a number of recent published scientific studies about what this food source means for the physical well-being and natural behavior of not just these turtles, but other marine creatures, from tiny reef fish to giant sharks.

“This situation exemplifies one of the biggest challenges in conservation science,” said Owen O’Shea, executive director of the Center for Ocean Research and Education in the Bahamas. “We’re often addressing issues that have already started and we’re playing catch up.”

Many experts argue that in marine environments, such feeding practices are poorly regulated, presenting risks for wildlife that are already in decline. When humans ease the energy-intensive process of seeking food for wild animals by frequently offering them grub, it can facilitate habituation. That can make animals less guarded around humans, and lead to other damaging behaviors.

Although some conservationists have successfully lobbied to end provisioning at certain sites, to feed or not to feed continues to be a dilemma at others.

It’s no surprise that the wildlife tourism industry has time and again turned to provisioning wildlife.

“From a commercial point of view, what wildlife tourism requires is the ability to sell an experience where you can reliably sight or interact with the wild animals,” said Mark Orams, a professor of marine recreation and tourism at the Auckland University of Technology. “Provisioning allows that to occur.”

Local communities and economies in many countries are surely benefiting from wildlife tourism that uses provisioning. But most conservation biologists would describe the feedings as dangerous to the health and safety of wild animals.

In marine environments, such provisioning herds species — that would otherwise roam large swathes of the ocean alone — close together.

“Suddenly a very independent and solitary animal is in close contact with everybody else, which means it’s easier for them to get infected with parasites or viruses,” said Valeria Senigaglia, a marine biologist at Australia’s Murdoch University.

It also encourages wild animals to eat regularly rather than intermittently, and sometimes discourages tracking and hunting of prey. Habituation, aggression and loss of fear toward humans typically follows, which could endanger the animals.

Janet Mann, a marine biologist at Georgetown University in Washington, D.C., who has witnessed this behavior among dolphins, doesn’t support such provisioning.

“Humans have a strong urge to feed wild animals in their environment,” Dr. Mann said. “Sometimes we think we’re doing them a favor, but not necessarily.”

National or local laws that ban feeding wild animals can serve as deterrents. In the United States, for example, feeding marine mammals constitutes harassment under the 1972 Marine Mammal Protection Act. But ongoing illegal feeding of dolphins by local and recreational boaters and tourists in Florida’s Sarasota Bay, for instance, indicates challenges with enforcement.

In the Philippines, a country that typically attracts over eight million tourists a year, recent national legislation bans the feeding of whale sharks, the world’s largest species of fish. But the law sometimes clashes with local wildlife welfare rules that only broadly prohibit harassment, without specifically mentioning provisioning. 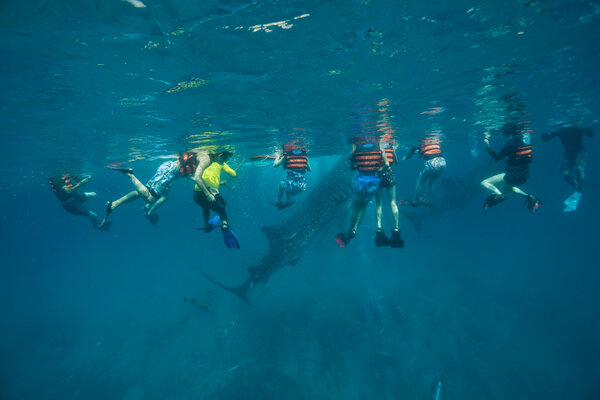 Villagers in Tan-awan, on Cebu Island in the Philippines, manage the world’s largest whale shark tourism destination. Hand-feeding this globally endangered species with shrimp is central to the operation.

Although whale sharks had been spotted in the region, they didn’t historically gather near the village’s coast until 2011. Local fishermen may have used shrimp to lure these underwater giants away from baits used on their fishing lines, which could have inspired tour operators to use similar tactics beginning around that year to attract the gentle filter feeders for visitors’ enjoyment.

Since then, the industry has boomed. The local government has created an interaction site 160 feet offshore. There, in a cordoned area the size of almost 12 football fields, fishermen feed the whale sharks and tourists swim or dive to take selfies with the fish. But there are rules: no motorized boats, and only designated fishermen can feed the animals every morning within the buoy-marked boundary.

There are also limits on how many people can interact with a single whale shark and how close they can get to it. Touching or riding these animals is prohibited, and a visitor’s time in the interaction area is limited to 30 minutes, while a sea warden keeps guard.

But there’s a price that many whale sharks pay.

Researchers at the Philippines’ Large Marine Vertebrate Research Institute found scars on 144 of 152 whale sharks they photographed from 2012 through 2015 near Tan-awan, possibly from contact with ropes, small boats or propellers. At the interaction site, they found some whale sharks spending six times longer in the warm surface waters and performing deeper dives toward the end of the feeding session, possibly to cool down — a behavior that could affect their long-term fitness.

Also, despite the many rules, the researchers observed poor compliance from many tourists who moved too close to the whale sharks. Some even touched the animals.

The research team has proposed several solutions, including limiting daily tourist numbers and raising ticket prices. Restricting the feeding to a select set of whale sharks could also help. But they also warn that modifying an activity that brings income to a once extremely poor community is complicated.

At Monkey Mia in Western Australia’s Shark Bay, the state’s Parks and Wildlife Services staff use another regulatory approach to limit the provisioning of Indo-Pacific bottlenose dolphins.

Tourists are only allowed to feed two to five identified females — of the area’s thousands — that the bay’s managers track. These dolphins and their calves (who aren’t provisioned) typically visit a 300-foot section of beach, beyond which tourists line up for up to three feeding sessions each morning. Park rangers select some visitors to step knee-deep into the water and hand-feed the adults with the fish they provide. The rangers also limit these handouts to just 10 percent of a dolphin’s daily intake in order to dissuade food dependency. Otherwise touching or swimming with these animals is prohibited.

Provisioning looked very different in Monkey Mia in the 1960s, when fishermen tossed unwanted catch or bait along shorelines. Into the 1980s, authorities did not regulate feeding by tourists near the shore or from boats. People touched the dolphins, fed them multiple times during the day and there were no limits on how much fish they were given.

“In some ways it was fun for people because where else could you go and frolic around the water with dolphins and get them to play with you,” said Dr. Mann, who has been studying the Monkey Mia dolphins for about 40 years.

Although feeding regulations were put in place in 1989, the 1994 deaths of three calves resulted in new rules in 1995 that are still in effect today.

Since then, adult dolphins have cut their daily time at the provisioning site by over an hour. The early survival of their calves also substantially improved after 1995, possibly because nursing near shore waters was challenging for mothers.

“When a baby dolphin feeds, it needs to go underneath the mother,” Dr. Senigaglia said. “With no space in shallow waters, the dolphin can’t nurse.”

Even with these rules in place, compared with the calves of non-provisioned mothers, these baby dolphins received less maternal care and foraged more. Also, the survival benefits recorded among these calves waned at the juvenile stage.

But that is unlikely to halt the feeding at Monkey Mia, Dr. Mann said. The site attracts nearly 100,000 tourists every year and millions of dollars in ticket sales. It also provisions only a handful of animals, while offering an avenue to get people interested in dolphin biology and conservation.

Nipping it in the bud

Unlike the Australian dolphin site, many more locations have unregulated feeding. At some of them, government agencies and conservation organizations have worked together to halt provisioning.

At Laganas Bay off Greece’s Zakynthos Island a few years ago, local tour boat operators tossed tomatoes, oranges and other fruits and vegetables into the sparkling blue waters to entice loggerhead turtles. Tourists waited for the turtles to come to the surface, and then took photos and touched them. In the harbor, some fishermen also provisioned these primarily carnivorous turtles, collecting tips from onlookers whom they encouraged to touch the turtle’s head and flippers.

“This is totally inappropriate,” said Panagiota Theodorou, a conservation coordinator at Archelon, the sea turtle protection society in Greece. “Then animals start being aggressive to humans.”

She came across social media posts of several swimmers who got bitten by the region’s turtles.

Ms. Theodorou and her colleagues worked with the local coast guard to raise awareness about the issue among tour operators and tourists. They wrote letters and issued news releases to explain the downsides of such provisioning. The coast guard also issued strict warnings to tour companies to discontinue the feeding or risk fines. The provisioning seemed to have ceased in 2018.

Thinking beyond the short-term 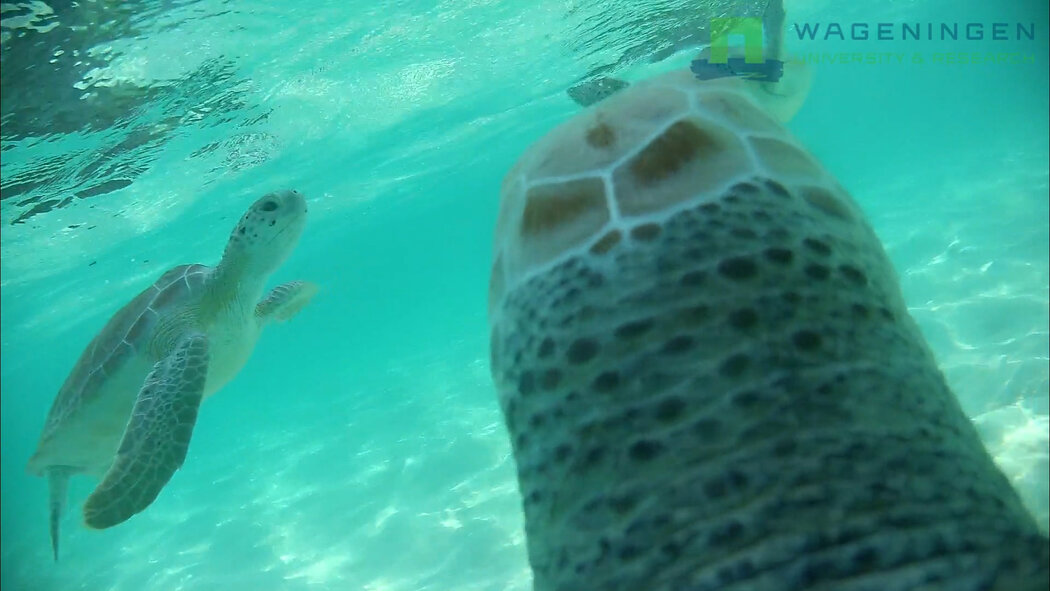 Back in the Bahamas, Dr. O’Shea and Fee Smulders, a marine ecology graduate student at the University of Wageningen in the Netherlands, observed the provisioned green turtles were also aggressive toward each other when competing for food.

By mounting cameras on five fed turtles and studying hours of video footage, they noted that the otherwise solitary animals were resting in groups in shallow waters.

“If you have high densities of turtles, then one day a shark could show up,” Ms. Smulders said. “That could be dangerous for tourists.”

But in the absence of regulation, the provisioning will likely persist. Mr. Pinder, for instance, has no plans to halt sea turtle feeding at Bottom Harbor. If turtle populations were to decline in the future, he says he would reconsider. For now, though, deviations in natural turtle behavior recorded by scientists don’t seem compelling to him.

But Dr. Orams at Auckland University of Technology said there should be priorities in addition to making money.

“The evidence is so clear that when we deliberately provision marine animals as a tourist attraction, the long-term implications are never good.”