Follow
Home » Science » The US is by far the biggest contributor to plastic waste, study finds

The US is ‘by far’ the biggest contributor to global plastic waste in the world, producing 42 million TONNES in 2016 – more than twice as much as China, study finds

The US produced 42 million tonnes of plastic waste in 2016, making it ‘by far’ the biggest contributor to plastic waste, a new report reveals.

About 1 million tonnes of this total ended up in the world’s oceans, according to the report from the federal government’s National Academy of Sciences.

At 42 million tonnes, the US’s contribution to the world’s plastic waste is more than twice as much as China, and more than the 28 countries of the European Union (including the UK) combined, the organisation claims.

On average, every American generates 286 pounds of plastic waste per year, with the UK next on the list at 218 pounds per person per year, followed by South Korea at 194 pounds per year, it found.

The US should create a national strategy by the end of 2022 to reduce its contribution to plastic waste, National Academies of Sciences experts say.

Worldwide, at least 8.8 million metric tons of plastic waste enter the world’s oceans each year – the equivalent of dumping a garbage truck of plastic into the ocean every minute. 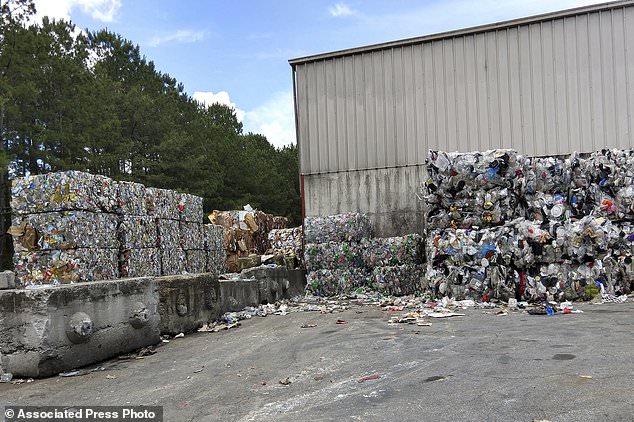 Plastic baled for shipment at a materials recovery facility in the US. The country needs to rethink and reduce the way it generates plastics because so much of it is littering the oceans, the National Academy of Sciences recommends in a new report

The US is the world’s top plastics waste producer, the report says.

It generates more than 42 million metric tonnes a year.

About 1 million tonnes (2.2 billion pounds) of this ends up in the world’s oceans.

US plastic production has consistently increased each year since the 1960s.

If the current rise in plastics pollution continues, by 2030 the world will be putting 58.4 million tons (53 million metric tons) into the oceans each year, or about half the weight of the fish caught in seas, the report warns.

To produce their estimates, the researchers reviewed previous studies and government data on plastic waste around the world.

‘We suggest that one way to reduce plastic waste would be to make less plastic,’ said oceanographer Kara Lavender Law, a report co-author who has conducted numerous studies about plastic waste.

‘Recycling cannot manage the vast majority of the plastic waste that we generate.’

Recycling and proper disposal alone aren’t enough and can’t handle the problem, so the US ‘should substantially reduce solid waste generation (absolute and per person) to reduce plastic waste in the environment,’ the report says.

The plastics issue can’t be solved unless the country makes less plastic, designs it differently, keeps better track of it and cleans up more waste.

‘Plastic waste is an environmental and social crisis that the US needs to affirmatively address from source to sea.’

Virgin plastic is plastic resin that has been newly created without any recycled materials.

It’s less environmentally-friendly than recycled plastic, which helps build a ‘circular economy’ – where material resources are used again and again for as long as possible.

National Academy of Sciences points to the US’s reliance on virgin plastic – plastic resin that has been newly created without any recycled materials.

The problem is virgin plastic prices to produce it are low due to fossil fuel subsidies – where the cost of fossil fuel energy is reduced.

Therefore, virgin plastics are more profitable to produce and US manufacturing of them continues to increase.

More than 90 per cent of plastics are made from virgin fossil feedstocks, which uses roughly 6 per cent of global oil consumption, the report says.

While recycling ‘is technically possible for some plastics, little plastic waste is recycled in the United States,’ it adds.

‘One of the major barriers for recycling is the economics of virgin plastic and subsidization of the fossil fuel industry,’ Spring said. 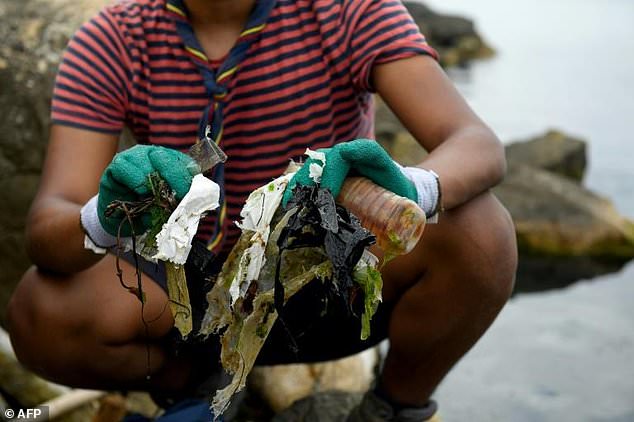 A volunteer collects plastic waste on an island of the Etang de Berre, France. In 2016, the US generated more plastic waste than any other country, exceeding that of all European Union member states combined

Plastics cause ‘devastating impacts on ocean health and marine wildlife’, by becoming entangled with fish, marine mammals and seabirds, and are often  mistaken by some species for food, often with fatal consequences.

Plastic in our rivers and oceans also just breaks down into smaller and smaller pieces, eventually creating microplastics, which are even more easily ingested by sea life and can even enter the food chain.

Looking at hundreds of studies, the report said of 914 marine species examined, 701 had problems with ingesting plastic and 354 of them got tangled in plastics.

DNA studies show that some plastics – especially those exposed to wastewater –contain human and wildlife viruses and bacteria that can spread disease. 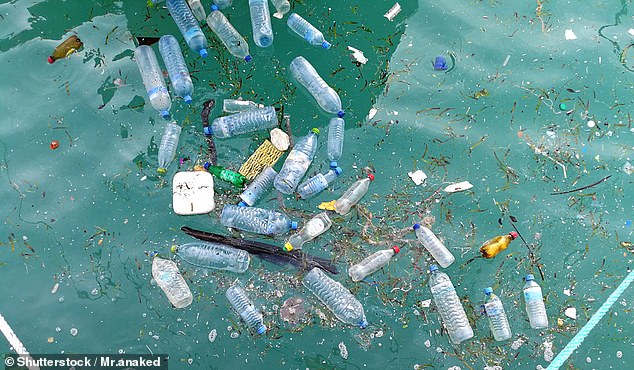 Plastic in our rivers and oceans just breaks down into smaller and smaller pieces, eventually creating microplastics

American Chemistry Council (ACC), which represents plastics manufacturers, praised most of the academy’s report, but it blasted the idea of limiting plastics production.

Since 2017, more than $7.5 billion in advanced recycling projects have been announced or are already operating, said ACC.

The organisation also called for a study on greenhouse gas implications of raw materials in packaging and plastic products.

However, the report’s figures and recommendations make sense and are grounded in science, said Australian scientist Denise Hardesty who studies the plastics waste issue but wasn’t part of the US report.

GLOBAL USE OF ‘VIRGIN PLASTIC’ BY SOME OF THE WORLD’S LARGEST BRANDS HAS PEAKED AND IS SET TO FALL, STUDY SAYS

Global use of ‘virgin plastic’ by manufacturers has peaked and is on track to fall by around a fifth by 2025 due to the rise in recycled packaging, a 2021 report found.

Virgin plastic use by companies including Nestlé, PepsiCo and Unilever has fallen for the second year running, UK charity the Ellen MacArthur Foundation.

The foundation promotes a focus on a ‘circular economy’ where material resources are kept in use as long as possible as an alternative to virgin plastic use.

In all, 63 consumer goods groups and retailers who have partnered the foundation are set to cut their use of non-recycled plastics by almost a fifth by 2025.

The Ellen MacArthur Foundation leads the Global Commitment, launched in 2018 in collaboration with the UN Environment Programme.

The commitment has 63 brands and retail signatories including Nestlé, PepsiCo, Unilever, Coca-Cola, Mars and L’Oréal, who are committed to plastic packaging reduction targets for 2025.

Read more: Global use of ‘virgin plastic’ is set to fall by a fifth by 2025, study reveals