GW Ori is a star system 1,300 light years from Earth in the constellation of Orion. It is surrounded by a huge disk of dust and gas, a common feature of young star systems that are forming planets. But fascinatingly, it is a system with not one star, but three.

As if that were not intriguing enough, GW Ori’s disk is split in two, almost like Saturn’s rings if they had a massive gap in between. And to make it even more bizarre, the outer ring is tilted at about 38 degrees.

Scientists have been trying to explain what is going on there. Some hypothesized that the gap in the disk could be the result of one or more planets forming in the system. If so, this would be the first known planet that orbits three stars at once, also known as a circumtriple planet.

Now the GW Ori system has been modeled in greater detail, and researchers say a planet — a gassy world as massive as Jupiter — is the best explanation for the gap in the dust cloud. Although the planet itself cannot be seen, astronomers may be witnessing it carve out its orbit in its first million years of its existence.

A paper on the finding was published in September in the Monthly Notices of the Royal Astronomical Society. The scientists say it disproves an alternative explanation — that the gravitational torque of the stars cleared the space in the disk. Their paper suggests there is not enough turbulence in the disk, known as its viscosity, for this explanation to suffice.

The finding also highlights how much more there is to learn about the unexpected ways in which planets can form. 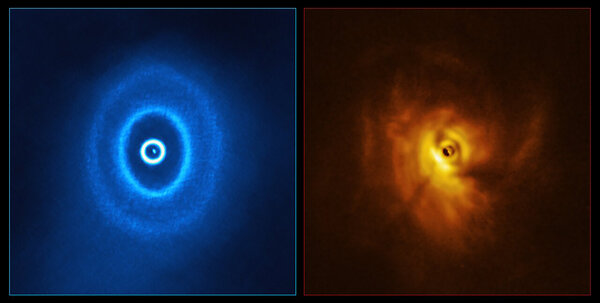 Anyone who has watched George Lucas’ original “Star Wars”is familiar with planets that can have two stars rising and falling in its skies. Luke Skywalker’s dusty home of Tatooine was in such a binary star system. But a planet orbiting three stars would be more unusual.

If a familiar life form could dwell on a gas giant like the one that would be orbiting GW Ori, it would not actually be able to see the three stars in its skies. Rather, they would see only a pair as the two innermost stars orbit so close as to appear like a single point of light. Yet as the planet rotated, its stars would rise and fall in fascinating sunrises and sunsets unlike any other known world.

“‘Star Wars’ missed a trick,” said Rebecca Nealon from the University of Warwick in England, a co-author on the paper.

Scientists have been on the lookout for a planet orbiting three stars, and found potential evidence in another system, GG Tau A, located about 450 light years from Earth. But the researchers say the gap in GW Ori’s gas and dust ring makes it a more convincing example.

“It may be the first evidence of a circumtriple planet carving a gap in real time,” said Jeremy Smallwood from the University of Nevada, Las Vegas, lead author of the new paper.

William Welsh, an astronomer at San Diego State University, said the researchers “make a good case. If this turns out to be a planet, it would be fascinating.”

Alison Young from the University of Leicester in England who has argued that GW Ori’s stars caused the gap in the system’s disk, rather than a planet, notes that observations from the ALMA telescope and Very Large Telescope in Chile in the coming months could end the debate.

“We’ll be able to look for direct evidence of a planet in the disk,” Dr. Young said.

If the planet hypothesis is confirmed, the system would reinforce the idea that planet formation is common. Several worlds, known as circumbinary planets, are already known to orbit two stars at once. But circumtriple planets have been harder to come by — despite estimates that at least a tenth of all stars cluster in systems of three or more. Yet their possible existence suggests that planets spring up in all sorts of places, even here in this most bizarre of systems.

That suggests that exoplanets are likely to arise in more and more unusual locations. “What we’ve learned is any time planets can form, they do,” said Sean Raymond, an astronomer from the University of Bordeaux in France who was not involved in the paper.

Perhaps even a world orbiting four, or five, or six stars at once?

galaxy, Monthly No, planet, Space
You may also like: