Three-eyed 'dinosaur shrimp' emerge in Arizona after years of dormancy

Hundreds of the horseshoe-crab-like creatures, known as Triops, emerged from tiny eggs and began swimming around a temporary lake formed at Wupatki National Monument, about 30 miles outside Flagstaff.

Triops eggs can lie dormant for years until enough rainfall comes and gives them adequate time and space to hatch and mature.

‘Then they gorge themselves, grow to adulthood in just over a week, breed, and lay more eggs to repeat the cycle,’ park staff wrote on Facebook.

The Triops’ life cycle is incredibly short — generally about 90 days — but the Wupatki hatchlings only had a few weeks to hatch, grow to maturity and lay more eggs before the pool dried up, according to Live Science.

And even before that happened, many became a tasty snack for local nighthawks and ravens. 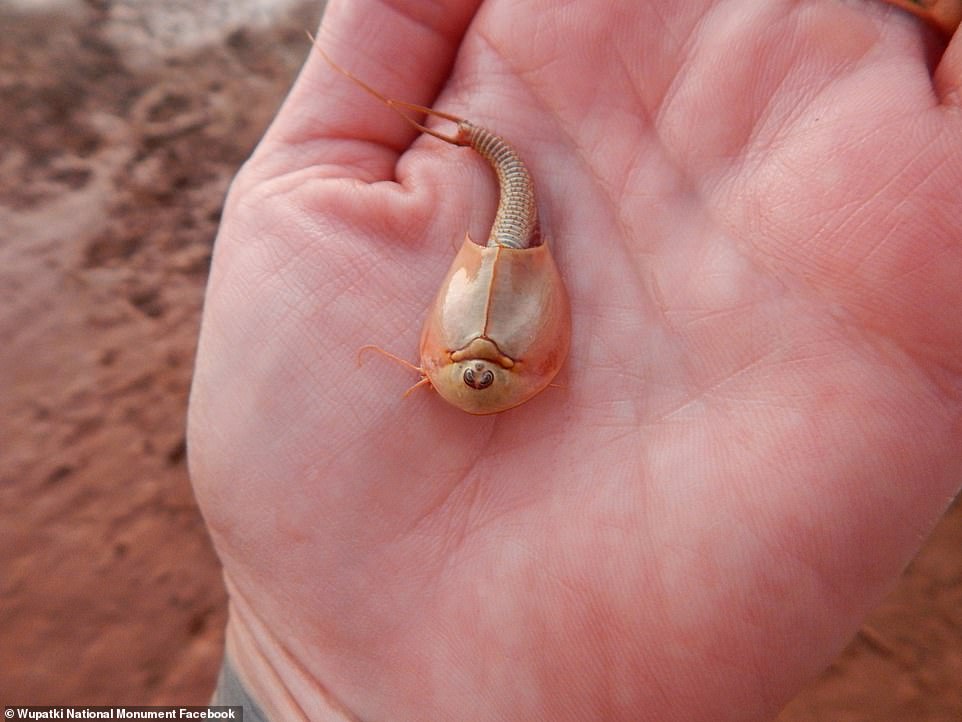 Hundreds of the horseshoe-crab-like creatures, known as Triops, emerged from tiny eggs after torrential rains and began swimming around a temporary lake formed at Wupatki National Monument in Arizona

Wupakti, which means ‘tall house’ in Hopi, is an ancestral Puebloan site managed by the National Park Service.

Constructed around 500 A.D., it was comprised of over 100 rooms and inhabited by members of the Cohonina, Kayenta Anasazi and Sinagua people.

The entire site was permanently abandoned in 1225 but when it was inhabited, a lack of natural springs meant residents had to harvest rainwater during rare showers.

The ball court where the Triops made their home is the northernmost ever discovered in North America. 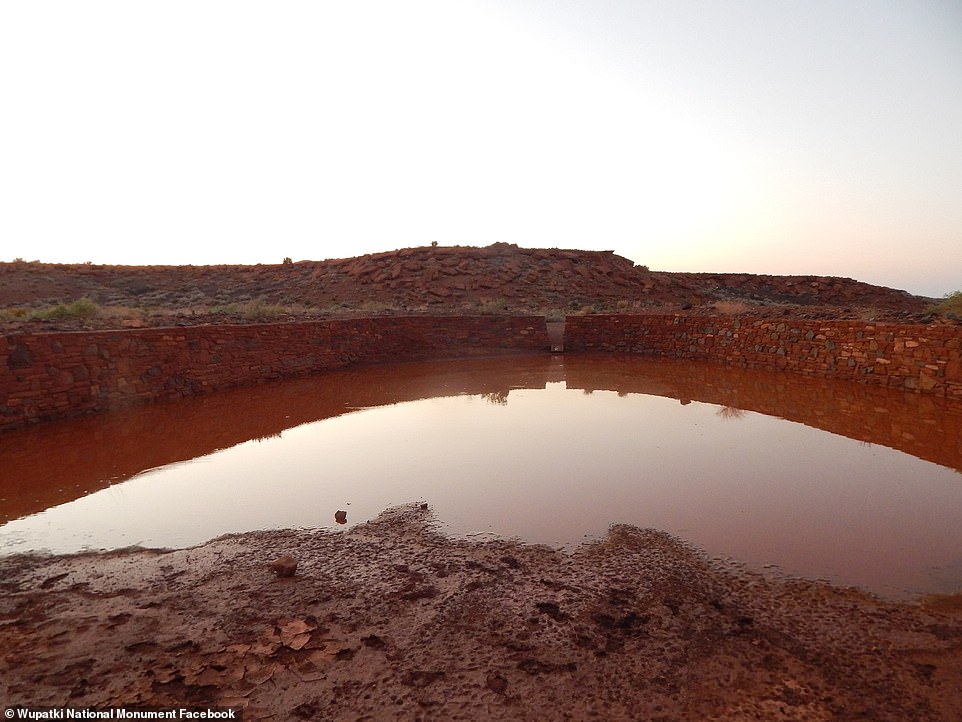 A sudden downpour in late July flooded the ceremonial ball court at Wupatki, allowing the Triops to emerge from their deep slumber and quickly hatch 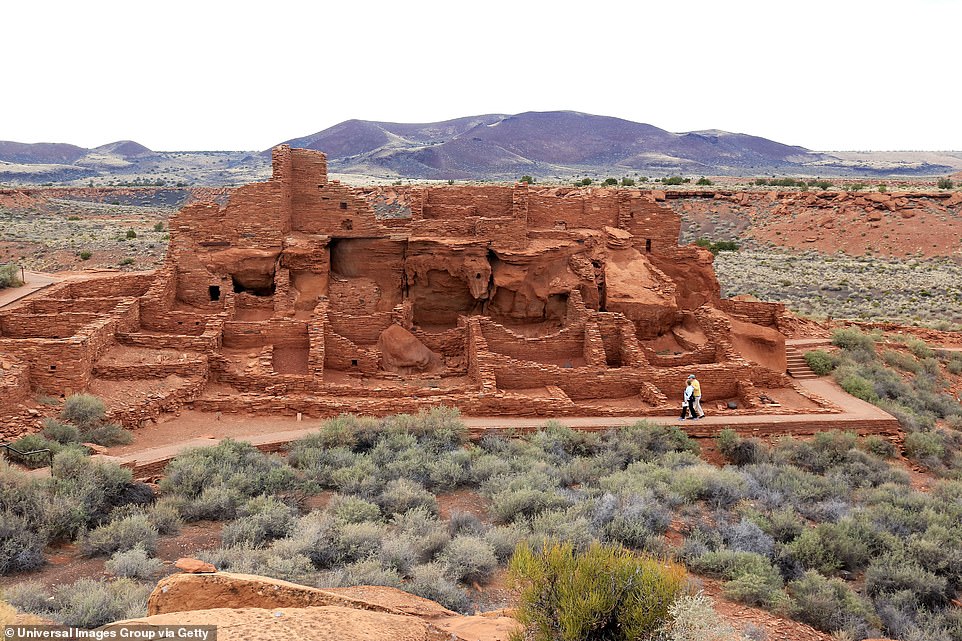 First inhabited more than 1,500 years ago by members of the Cohonina, Kayenta Anasazi and Sinagua people, the main structure at Wupatki National Monument was comprised of over 100 rooms. About 30 miles outside Flagstaff, it is overseen by the National Park Service

‘We were getting reports of tadpoles in the standing pool of water down in the ballcourt on the Wupatki Pueblo trail,’  the Facebook post read.

‘This would not be unusual since the recent rains have brought up the toads from their underground burrows. However, upon investigation by rangers, we found something entirely different and somewhat unexpected.’

Wupatki ranger Lauren Carter had heard of Triops hatching at Petrified Forest National Park, where she was previously posted, and knew what to look for.

The tiny crustaceans, the sole members of the order Notostraca, lucked out with heavy accumulation this summer: between 1948 and 2005, Wupatki has averaged about eight inches of rain a year, according to the Western Regional Climate Center.

In 2020, the monument had its driest summer on record- just four inches of rain.

But the downpour in the last few days of July 2021 contributed nearly five inches, enough to bring these eerie swimmers to life.

‘Triops are just another example of how even in the harshest conditions, life finds a way,’ the park wrote on Facebook. 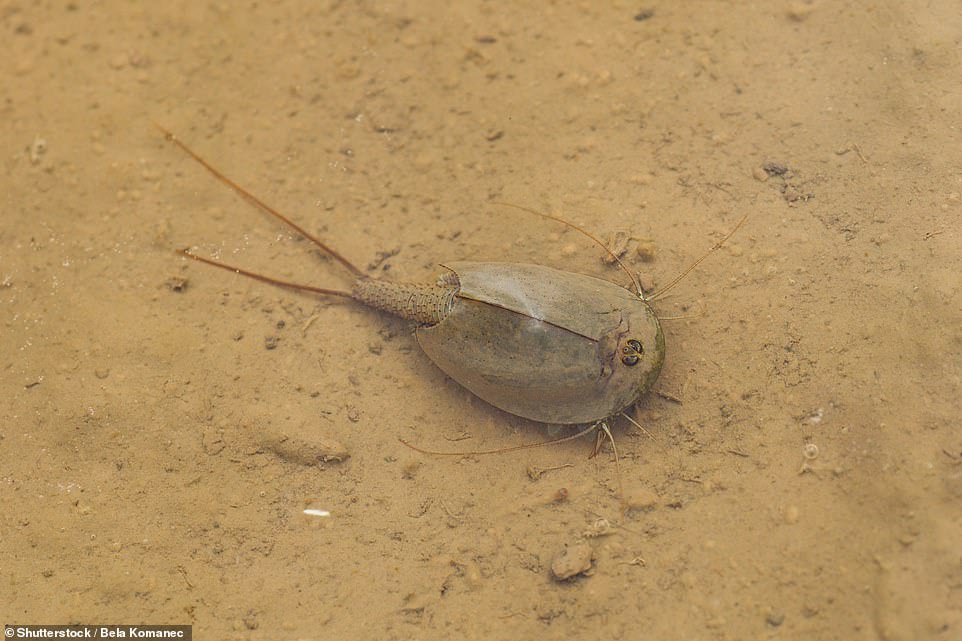 The Triops’ life cycle is incredibly short — generally about 90 days. Once they hatch it’s a mad dash to gorge themselves, grow to adulthood in just over a week, breed, and lay more eggs

With so little time, Triops have developed a unique reproductive technique—while they typically mate via sexual reproduction, females are parthenogenetic and can produce offspring from unfertilized eggs.

Named after the Greek term for ‘three-eyes,’ Triops are sometimes referred to as tadpole shrimp because of their long undulous tails or ‘shield shrimp’ because of their helmet-like carapace.

They have two large compound eyes and a small ocellus, or ‘simple eye’, in the middle that has photoreceptors that help detect light.

They’re also referred to as ‘dinosaur shrimp’ because their external appearance has changed little from fossils dated to the Devonian period, between 419 million to 359 million years ago, or more than 100 million years before dinosaurs walked the Earth. 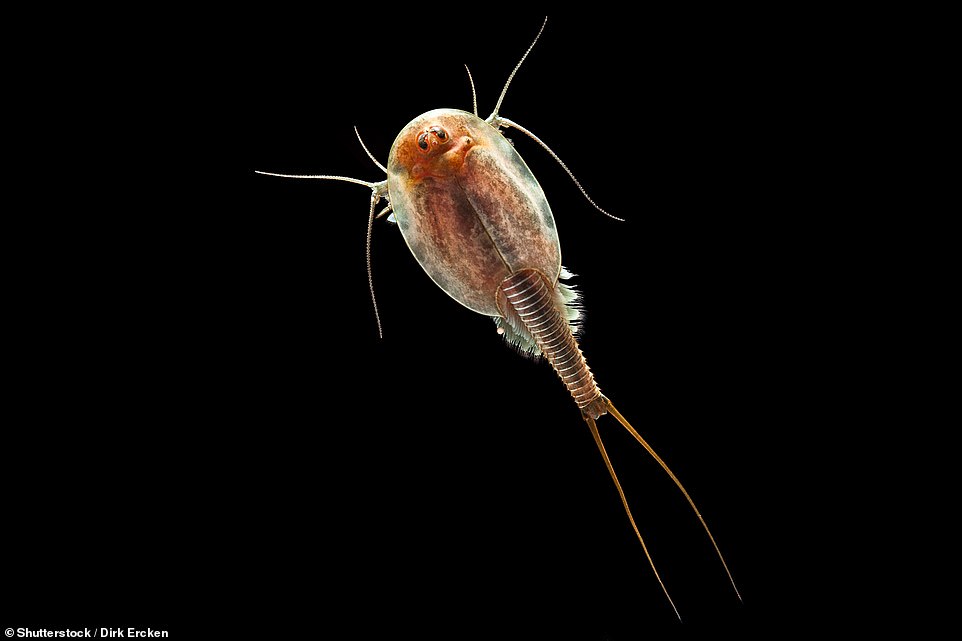 The Triops in Wupatki only had a few weeks before the water evaporated. Before that, local ravens and nighthawks were picking them off as tasty snacks

However, Carter says it’s a misnomer to consider Triops ‘living fossils’ because they have evolved over the millennia.

‘They have changed, they have evolved,’ she told Live Science.

‘It’s just that the outward appearance of them is very similar to what they were millions of years ago.’

The creatures found at Wupatkimay have been of the species Triops longicaudatus, which are found in short-lived freshwater ponds in North, Central and South America

Further analysis after the next torrential rain would be needed to confirm that, Carter added. 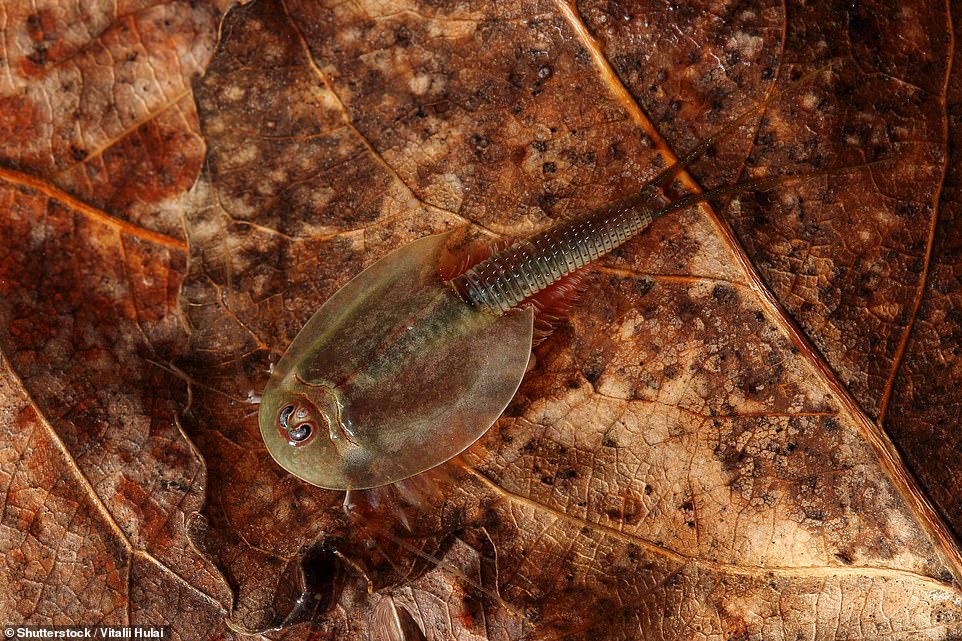 Triops are sometimes referred to as shield shrimp, because of their helmet-like carapace, or ‘dinosaur shrimp’ because their external appearance has changed little from fossils dated to the Devonian period, between 419 million to 359 million years ago