A new study suggests you shouldn’t feel guilty about drinking red wine in moderation during the week – in fact, it could give you health benefits.

A team of experts in Germany and Northern Ireland looked at the link between consumption of flavonoids – found in red wine, among other food and drink – and blood pressure in a sample of nearly 1,000 German people.

It’s thought that flavonoids promote the relaxation of muscles in our arteries, allowing them to widen and therefore improving blood flow.

However, the experts stress that if you don’t drink alcohol already, you shouldn’t start, and that boozers should always bear in mind official drinking guidelines. 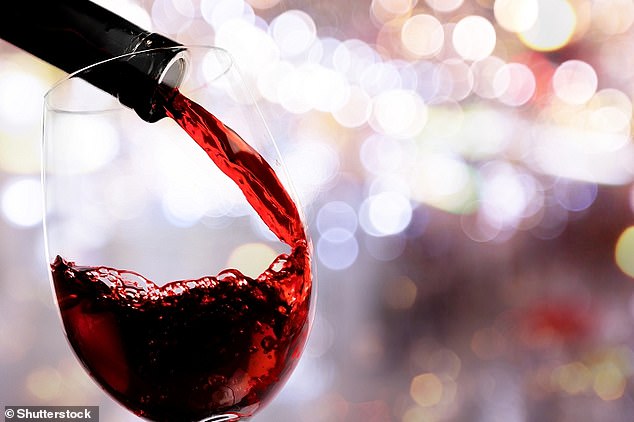 Red grapes, their skin, their seeds and the wine derived from them are rich in beneficial compounds called flavonoids

The NHS advises men and women not to drink more than 14 units a week a week to avoid health risks.

For example, a bottle of lager would contain around 1.7 units, and a large glass of wine around three units.

A pint of strong lager contains 3 units of alcohol, whereas the same volume of low-strength lager has just over 2 units.

If you have one or two heavy drinking episodes a week, you increase your risk of long-term illness and injury, according to the Chief Medical Officers’ guideline.

The risk of developing a range of health problems (including cancers of the mouth, throat and breast) increases the more you drink on a regular basis.

According to the American Heart Association, which published the study, alcohol intake can be part of a healthy diet if consumed in moderation, meaning no more than one alcoholic drink a day for women and two alcohol drinks a day for men.

The NHS currently advises men and women not to drink more than 14 units a week on a regular basis. A large glass of wine (250ml) is around three units.

The study, published in the journal Hypertension, was conducted by scientists at Queen’s University Belfast and Kiel University in Germany.

According to the team, flavonoids – the abundant nutrients in fruits, vegetables, tea and other plant-based foods – appear to have a positive effect on blood pressure levels.

Flavonoids are broken down by the trillion-strong community of microorganisms in our gut, known as the microbiota.

‘This study provides evidence to suggest these blood pressure-lowering effects are achievable with simple changes to the daily diet.’

Recent studies found a link between gut microbiota, the microorganisms in the human digestive tract, and cardiovascular disease (CVD), which is the leading cause of death worldwide.

Gut microbiota is highly variable between individuals, and there are reported differences in gut microbial compositions among people with and without CVD.

So the researchers wanted to investigate how variance within the gut microbiome could explain the link between intake of flavonoid-rich foods and blood pressure.

Red grapes, their skin, their seeds and the wine derived from them are rich in flavonoids.

Flavonoids have antioxidative, anti-inflammatory, anti-mutagenic and anti-carcinogenic properties, according to experts.

They also have the capacity to modulate key cellular enzyme functions.

For the study, the experts recruited 904 adults between the ages of 25 and 82 from Germany’s PopGen biobank.

The PopGen biobank includes participants from a network of seven biobanks in Northern Germany.

Researchers evaluated the participants’ food intake, gut microbiome and blood pressure levels together with other clinical and molecular phenotyping at regular follow-up examinations.

Participants’ intake of flavonoid-rich foods during the previous year was calculated from a self-reported food questionnaire detailing the frequency and quantity eaten of 112 foods.

Flavonoid values were assigned to foods according to US Department of Agriculture data on flavonoid content in food.

As well as this, each participant’s height and weight was measured to calculate body mass index (BMI). 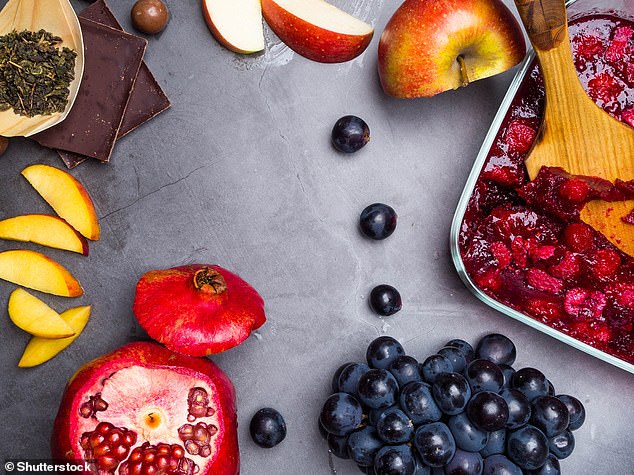 A millimetre of mercury is a unit used to measure blood pressure and other pressures.

Millimetre of mercury, or mmHg, is a unit of pressure equal to the pressure exerted by a column of mercury 1 millimetre high at 0°C and under the acceleration of gravity.

Blood pressure is given as systolic and diastolic.

Having high blood pressure (hypertension) increases your risk of heart attack, stroke and other conditions.

Up to 15.2 per cent of the association between flavonoid-rich foods and systolic blood pressure could be explained by the diversity found in participants’ gut microbiome.

Meanwhile, eating 1.6 servings of berries per day (one serving equals 80 grams, or one cup) was associated with an average reduction in systolic blood pressure levels of 4.1 mm Hg, and about 12 per cent of the association was explained by gut microbiome factors.

Drinking 2.8 glasses (125 ml of wine per glass) of red wine a week was associated with an average of 3.7 mm Hg lower systolic blood pressure level, of which 15 per cent could be explained by the gut microbiome.

To put this into context, a systolic blood pressure of less than 120 mm Hg is considered ‘normal’, while 140 mm Hg or more is considered high.

The scientists now call for further research into how the gut microbiome mediates ‘the cardiovascular effects of flavonoid-rich foods’.

‘Our findings indicate future trials should look at participants according to metabolic profile in order to more accurately study the roles of metabolism and the gut microbiome in regulating the effects of flavonoids on blood pressure,’ said Cassidy.

‘A better understanding of the highly individual variability of flavonoid metabolism could very well explain why some people have greater cardiovascular protection benefits from flavonoid-rich foods than others.’ 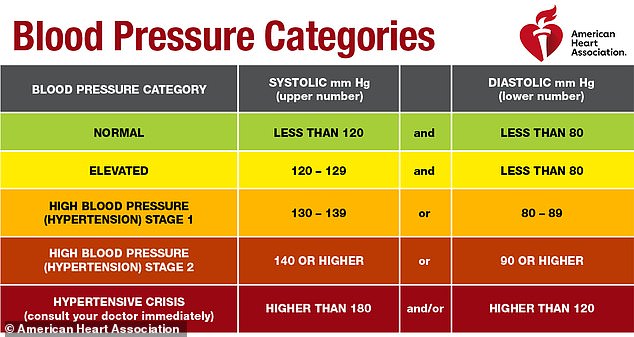 The experts also note, however, that their findings cannot prove a direct cause and effect, and that the focus of this study was on specific foods rich in flavonoids, not all food and beverages with flavonoids.

Looked at in combination, previous studies into the health benefits of red wine have provided a confusing mix of results.

For example, a study published earlier this year by University of Oxford academics revealed drinking any amount of alcohol is harmful to the brain.

This study linked ‘moderate’ drinking to lower volume of grey matter found in the outermost layer of the brain, which is high in neural cell bodies and plays a major part in the central nervous system.

Prior to this, 2020 research found one small glass of red wine a day can stave off diseases such as Type 2 diabetes, osteoporosis, Alzheimer’s and heart disease.

FLAVONOIDS REDUCE THE AMOUNT OF ENERGY ABSORBED FROM FOOD AND MAY HELP US LOSE WEIGHT, EXPERTS SAY

An apple a day not only keeps the doctor at bay – it also helps you shed the pounds, according to researchers.

Fruit and vegetables that contain high levels of flavonoids seem to stop people putting on weight.

They have long been celebrated for their antioxidant effect, which is thought to help prevent cell damage.

But experts also think that the compounds may also help reduce the energy – particularly from sugar – that is absorbed from food.

In 2016, researchers at the University of East Anglia (UEA) and Harvard Medical School found that certain flavonoids were linked to maintaining a healthy weight, and even helped people lose a little.

Eating the flavonoids contained in an 80g (2.8oz) handful of blueberries every day for four years would help people lose about 2lb 10oz.

By comparison, the average woman in the same period would usually put on about 2lb 3oz, and the average man 4lb 6oz.

In the study, published in the British Medical Journal, experts examined data for 124,086 men and women in the U.S. over a 24-year period.

Professor Aedin Cassidy, from the UEA’s Norwich Medical School, said: ‘This is the first large study to examine the associations between consumption of all flavonoids and weight gain in middle-aged and older adults.

‘Most adults gain weight as they age and even small increases in weight can have a substantial impact on risk of high blood pressure, developing heart disease, cancer or diabetes – so strategies to help individuals maintain a healthy weight in middle-age are needed.

‘We found that an increased consumption of most flavonoids was associated with weight maintenance, and even a modest weight loss. The results were found to be consistent across men and women, and different ages.

‘However losing even small amounts of weight, or preventing weight gain, can improve health and these modest effects were seen with a small, readily achievable increase in intake of many of these fruits.

‘Just a single portion of some of these fruits per day would have an important impact on health at a population level.’