Three humans were buried in the Tomb of Nestor's Cup, study shows

Unravelling the mystery of the Tomb of Nestor’s Cup: Famous 2,800-year-old burial in Italy contains the cremated remains of at least THREE humans – and not one as previously thought, new analysis reveals

Scientists have uncovered a major secret about the Tomb of Nestor’s Cup – a famous burial in Italy – more than 65 years after it was first discovered.

The researchers performed a new analysis of the contents of the tomb, which was found on the Italian island of Ischia in the Gulf of Naples in 1954 but dates back around 2,800 ago.

They found evidence of three cremated humans – not just one human, as previously thought – as well as the remains of animals including dogs and goats.

Also in the tomb was Nestor’s Cup, a wine goblet made from clay and featuring one of the earliest surviving examples of writing in the Greek alphabet.

The cup was named after a legendary golden cup owned by the mythical hero Nestor and described in Book 11 of the Iliad, the epic poem by Homer. 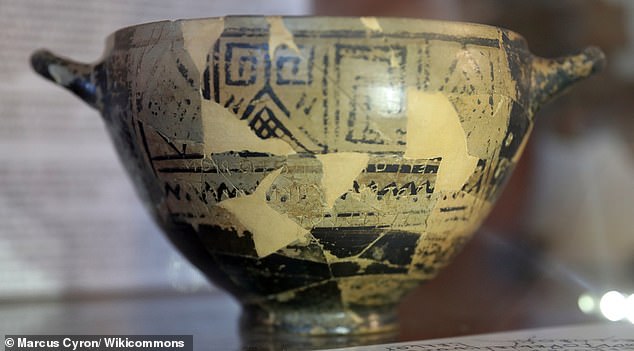 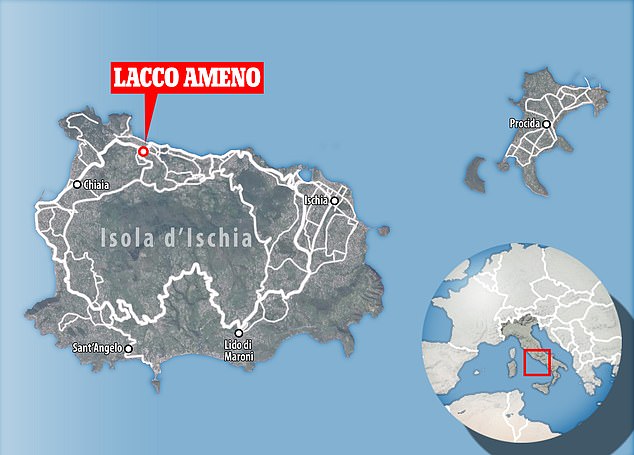 Nestor’s Cup is now on permanent display at the Museo Archeologico Nazionale di Villa Arbusto, in the town of Lacco Ameno on Isola d’Ischia (Ischia Island)

THE TOMB OF NESTOR’S CUP

The Tomb of Nestor’s Cup is an ancient Greek cremation burial.

It contained the remains of three people and several animals, as well as the eponymous cup.

Nestor’s Cup, dating from the 8th century BC, features one of the earliest surviving examples of writing in the Greek alphabet.

The inscription translates: ‘I am the cup of Nestor good for drinking. Whoever drinks from this cup, desire for beautifully crowned Aphrodite will seize him instantly.’

Since the tomb was discovered in 1954, many assumed that the cup was a treasured memento of the person who had been buried with it.

Previous research suggested that the tomb’s remains belong to a single young human who could’ve been the cup’s owner, but this new study suggests any one of the three individuals could have owned it, along with the animals also now discovered in the tomb.

The study was led by Melania Gigante, an archaeologist at the University of Padua, Italy, and published in PLOS One.

It presents the first evidence of multiple human individuals (and non-humans) among the remains in the Tomb of Nestor’s Cup, which is considered one of the most intriguing discoveries in Mediterranean pre-classic archaeology.

‘Our research rewrites the history and the previous archaeological interpretation of the tomb, throwing new light on funeral practices, culture and society of the Greek immigrants in the ancient West Mediterranean,’ the authors say.

‘This work reveals the commingled nature of the bone assemblage, identifying for the first time, more than one human individual mixed with faunal remains.

‘These outcomes dramatically change previous reconstructions of the cremation deposit, rewriting the answer to the question – who was buried with Nestor’s Cup?’

According to previous analyses, the Tomb of Nestor’s Cup – formally designated as ‘Cremation 168’ – only housed the cremated remains of a juvenile, aged approximately 10 to 14 years at death.

The Tomb of Nestor’s Cup was found containing a clay wine cup.

But it was modelled on a legendary golden cup owned by the mythical hero Nestor, described in Book 11 of Homer’s Iliad.

The cup is described over six lines, translated as: ‘There was also a cup of rare workmanship which the old man had brought with him from home, studded with bosses of gold.

‘It had four handles, on each of which there were two golden doves feeding, and it had two feet to stand on.

‘Any one else would hardly have been able to lift it from the table when it was full, but Nestor could do so quite easily.’

Since then, a vast body of literature has attempted to explain the link between this juvenile and the inscription on the cup, which is now on permanent display at the Museo Archeologico Nazionale di Villa Arbusto, Lacco Ameno (Ischia Island).

One of the earliest serving Greek inscriptions, the inscription translates: ‘I am the cup of Nestor good for drinking. Whoever drinks from this cup, desire for beautifully crowned Aphrodite will seize him instantly.’

For the study, Gigante and colleagues performed detailed analyses on the shape (morphology) and tissues (histology and histomorphometry) of the 195 burnt bone fragments in the tomb.

They determined that only about 130 of these fragments are human, while at least 45 belong to animals, including sheep, goats and possibly dogs.

According to the researchers, their results raise even more questions about the mysterious tomb and ownership of the priceless cup.

This study was unable to determine details about the humans among the remains, including their age at death or why they were buried with the cup.

As for the animal remains, the researchers suspect these might have been included as food or companions for the deceased.

The tomb was one of hundreds uncovered in the Italian site of Pithekoussai on the island in the 1950s.

Pithekoussai was an early Greek colony and may have acted as an early trading post, strategically positioned from copper and tin sources located in modern day Tuscany.

‘Our research, which combines the great work of archaeological interpretation to specific know-how in histology and advanced analysis on cremated remains, marked a double goal,’ the authors say.

‘Firstly, we were able to reconstruct the osteobiography of the individuals from Tomb 168 at Pithekoussai, answering the thorny question, “Who/what was buried with Nestor’s Cup?”

‘Secondly, we are sure that our study can be a new methodological step toward the reconstruction of the life-history of people in ancient times, even in case of poor preservation and/or complexity of the skeletal assemblage.’

THE ANCIENT GREEK SETTLEMENT OF PITHEKOUSSAI

Pithekoussai, founded in the early to middle 8th century by the Euboeans – inhabitants of the Greek island of Euboea.

Pithekoussai is thought to be the first Greek colony, though whether or not it was a colony or simply a trading post is debatable.

Located on the island of Ischia off the western coast of Italy, Pithekoussai is strategically positioned one or two days’ sailing length away from important copper and tin sources located in modern day Tuscany.

This speaks to Pithekoussai’s importance as primarily a trading center, established by the poleis Kalchedon and Eretria as a means of reaching important resources.

Further evidence to support the idea of Pithekoussai as a trading colony is that it contained a harbour but little agricultural potential.

This has led many scholars to contend that Pithekoussai was in fact not a colony but an emporion, or a ‘planned commercial enterprise in which hundreds of families prospered by the sale (without coinage) of their skills and labour’.

Archaeological records at Pithekoussai have been important in learning the finer points of the colony.

The excavations, conducted by Giorgio Buchner in the 1950s, studied about 500 graves, which represented only 5 per cent of a grave site used in the late 8th century.

The analysis and subsequent calculations have estimated the population of the colony at around five to ten thousand individuals.

Remains of houses and other architectural remains have led scholars to estimate the size of the colony at 1 km (0.6 miles) long.

Despite its size, however, scholars have hesitated to label Pithekoussai as a polis – a Greek city – likely because of its lack of political organisation and purpose.

Though at its height Pithekoussai was a well entrenched trading center, its power was eventually surpassed as the nearby colony of Cumae grew.

Cumae was founded by members of Pithekoussai as a more conventional colony where the emphasis was not so much on trade.

Historians date the decline of Pithekoussai to about 725 BC

Today, Pihekoussai, or more generally the island of Ischmia, is home to volcanic mud baths known to help sufferers of sciatica, a form of nerve pain.

Source: Joukowsky Institute for Archaeology and the Ancient World at Brown University

buried, humans, in, th, three, Were
You may also like: