Three volcanoes on a remote Alaskan island chain have been erupting simultaneously for almost two weeks.

The eruptions do not pose a threat to any nearby community due to the location of the Aleutian island chain, an 800-mile stretch of islands that ring the Bering Sea. The eruption started almost two weeks ago and have steadily grown stronger, but they do not yet pose a concern to experts. 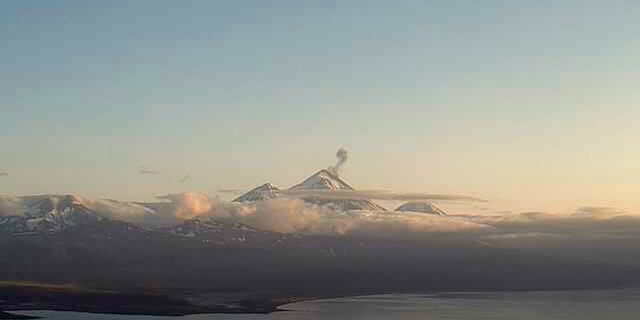 The Pavlof Volcano at the end of the Alaska Peninsula is the closest to any population; the volcano is emitting low levels of ash, which has shifted the warning level from yellow to orange, which is “an eruption underway that poses limited hazards,” Insider reported.

The nearest community, Cold Bay, sits about 35 miles from the volcano.

The two other volcanoes – the Great Sitkin Volcano and Semisopochnoi Volcano – sit hundreds of miles away. The latter volcano spewed an ash cloud about 10,000 feet into the air on an uninhabited island.

Meanwhile, the Great Sitkin Volcano has a confirmed lava fountain at its summit, which people in the nearby community of Adak can see.

“This lava fountain is kind of unusual for Great Sitkin, but it’s been fairly passive at this point,” said Chris Waythomas, a geologist with the Alaska Volcano Observatory.

Waythomas called the Great Sitkin eruption as “fairly passive,” but he said if activity increases, Adak could get ashfall from Great Sitkin, located on an island about 27 miles (43.45 kilometers) away.

Scientists continue to closely monitor the volcanoes for signs of changes.

A 6.9 earthquake struck off the coast of the Alaskan Peninsula early Saturday morning, the U.S. Geological Survey reported.

are, erupting, S, three, Volcanoes
You may also like: