Ditch the mints! Thumb-sized ‘sniffing’ sensor can detect if you have BAD BREATH by testing for hydrogen sulfide in your exhaled air

In case you forget the mints on a first date, scientists have made a portable, thumb-sized prototype device that quickly ‘sniffs out’ bad breath.

Created by experts in South Korea, the device detects the presence of hydrogen sulfide (H2S) – the gas that makes breath bad.

After exhaling into the device, presence of H2S on the breath could be displayed on an accompanying smartphone app. 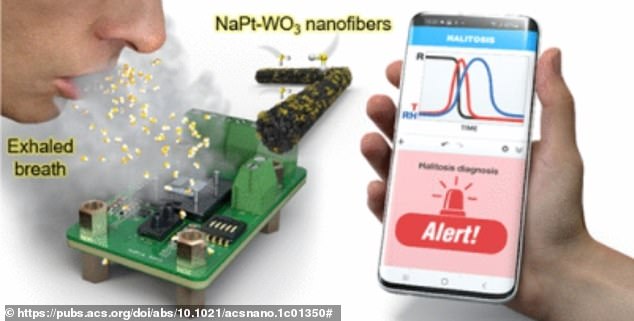 The study has been conducted by experts at Samsung Electronics and Korea Advanced Institute of Science and Technology (KAIST) in Daejeon, South Korea.

‘Continuous monitoring of hydrogen sulfide (H2S) in human breath for early stage diagnosis of halitosis [bad breath] is of great significance for prevention of dental diseases,’ they say in their paper.

‘This study offers possibilities for direct, highly reliable and rapid detection of H2S in real human breath without the need of any collection or filtering equipment.’

H2S is created inside the body in small doses – and is perhaps best known for carrying the torrid smell of rotten eggs.

H2S and other foul-smelling sulfur by-products are excreted as waste by bacteria on the tongue and below the gum line.

Unfortunately for the people around us, they’re are present in the air we exhale, making good oral hygiene crucial on a first date or a job interview to combat the smell.

Contrary to popular belief, you cannot check your breath by blowing into your hand. It simply doesn’t work, according to dentist and bacteriologist Dr Howard Katz, founder of The Breath Company.

Your body is designed so that you cannot detect your own odour and your senses become used to the smell of your own breath.

It’s a process called acclimation which we have developed over centuries of evolution – it helps us to be able to distinguish strange smells quickly without being overwhelmed by our own odours.

You exhale your own breath constantly, so you become accustomed to your own smell.

Previously, some devices have been able to measure small amounts of H2S, but they’ve require exhaled air to be collected and tested on expensive instruments in a lab, which is not feasible for consumers.

Previous studies have shown that when some metal oxides react with sulfur-containing gases, their electrical conductivity changes.

And when metal oxides are paired with noble metal catalysts, they can become more sensitive and selective.

So, to develop a small, real-time bad-breath analyser, the team wanted to find the right combination of substances that would elicit the fastest and strongest response to H2S in air blown directly onto it.

They then electrospun the solution into nanofibres that they heated, converting the tungsten into its metal oxide form.

Electrospinning is a method to produce ultra-fine fibres measuring as tiny as one billionth of a metre in diameter (a nanometre).

In preliminary tests, the composite made from equal parts of each metal had the largest reactivity to hydrogen sulfide, which the team measured as a large decrease in electrical resistance in less than 30 seconds.

Although this nanofibre reacted with a few sulfur-containing gases, it was most sensitive to H2S.

It created a response 9.5 and 2.7 times greater than with dimethyl sulfide or methyl mercaptan, respectively, which also contain sulfur. 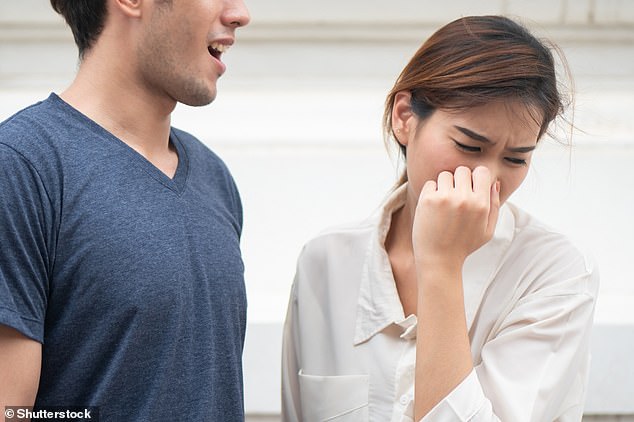 Finally, the team coated interdigitated gold electrodes with the nanofibers and combined the gas sensor with humidity, temperature and pressure sensors into their small prototype.

The device correctly identified bad breath 86 per cent of the time when the breath of people were exhaled directly onto it.

While the device is yet to be commercialised, it could be incorporated into very small devices like key rings for quick and easy self-diagnosis of bad breath.

The system is detailed further in the team’s paper, published in the journal ACS Nano.

There are a number of possible causes of halitosis:

This is the most common cause. Bacteria that build up on your teeth – particularly between them – as well as your tongue and gums, can produce unpleasant-smelling gases. These bacteria are also responsible for gum disease and tooth decay.

Eating strongly flavoured foods, such as garlic, onions and spices, is likely to make your breath smell. Strong-smelling drinks, such as coffee and alcohol, can also cause bad breath.

As well as making your breath smell, smoking stains your teeth, irritates your gums, and reduces your sense of taste.

It can also significantly affect the development of gum disease, another major cause of bad breath.

Crash dieting, fasting, and low-carbohydrate diets are another possible cause of bad breath. They cause the body to break down fat, which produces chemicals called ketones that can be smelled on your breath.

These include: nitrates – these are sometimes used to treat angina; some chemotherapy medication; and tranquillisers (phenothiazines).

If the medication you’re taking is causing bad breath, your GP may be able to recommend an alternative.

In rare cases, bad breath can be caused by certain medical conditions. In dry mouth (xerostomia), the flow and composition of saliva may be affected.

Dry mouth can sometimes be caused by a problem in the salivary glands or by breathing through your mouth instead of your nose.

In some cases, gastrointestinal conditions can also cause bad breath. For example, a bacterial infection of the stomach lining and small intestine (H. pylori infection) and gastro-oesophageal reflux disease (GORD) have been linked to bad breath.

Other medical conditions that can cause bad breath include diabetes and lung, throat, or nose infections – for example, bronchiectasis, bronchitis, tonsillitis, and sinusitis.

Some people are convinced they have bad breath when they don’t. This psychological condition is called halitophobia.