Feeling like you hit all the red lights on your commute could become a thing of the past, thanks to smart traffic lights that tell you how fast to drive to safely pass them.

The lights work by communicating with a dashboard-mounted display — much like a satnav — which then displays the speed needed to safely beat the light change.

And should the driver end up stuck at a red signal anyway, the display instead receives and displays information on how long it will be until the next green light.

The smart lights are capable of relaying information to appropriately-equipped cars from a distance of up to around two-thirds of a mile (or one kilometre).

In tests by Highways England and infrastructure consultants Amey, the lights were found to reduce vehicle emissions by a quarter by eliminating unnecessary stops.

Emissions can rise when vehicles are revved from stationary — and cutting down on this lowered CO₂ and NOx output levels by up to 27 and 17 per cent, respectively.

Around seven million people die prematurely because of air pollution every year — with 40,000 of these early deaths occurring in Britain alone. 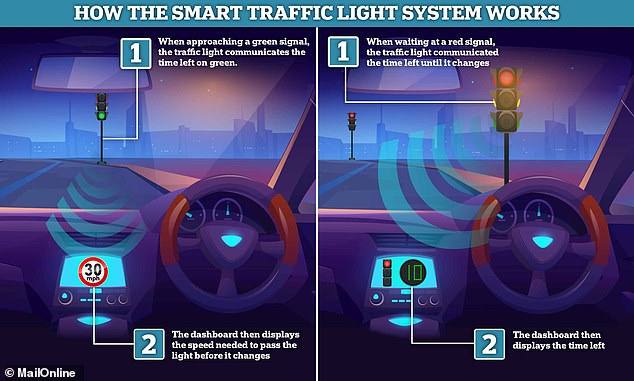 The lights work by communicating with a dashboard-mounted display — much like a satnav — which then displays the speed needed to safely beat the light change (as depicted left). Should the driver end up stuck at a red signal anyway, the display instead receives and displays information on how long it will be until the next green light (as right)

The concept — which is known as a ‘Green Light Optimal Speed Advisory’ — has previously been tested on the A2 and M2 in southeast England and on the the A45 Coventry Road from Birmingham.

The latest trial, which ran for four months and cost £825,000, saw smart lights tested on two motorways in the Greater Manchester area — the A627(M) and the M66.

Tests involved two different vehicles — a van and a heavy goods vehicle (HGV) — which made some 400 trips in total to assess their emissions impact both with and without the smart technology.

The largest emissions reductions were seen with the HGV, the researchers reported, as these vehicles typically produce more air pollution in the first place.

‘Though we have still some work to do to qualify the initial data, we are very excited at the early results,’ Highways England’s director of innovation Paul Doney explained to the Times.

‘By using connected technology to optimise a vehicle’s speed at junctions, it’s an opportunity to not only reduce pollutants, including carbon emissions, but to give a better experience to customers as well,’ he added.

According to Mr Doney, Highways England will be further analysing the trial data before considering whether to roll out the smart lights for widespread use. 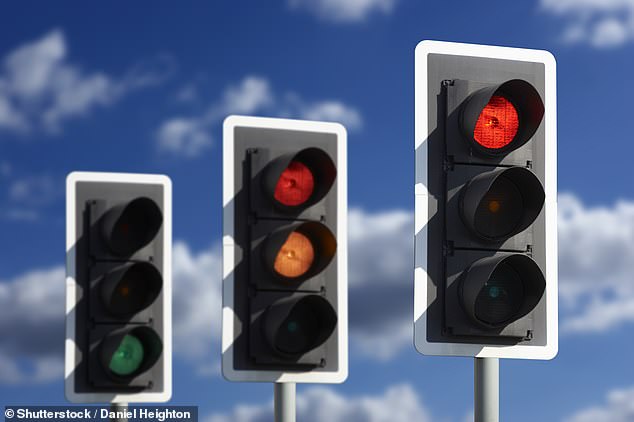 ‘By allowing drivers to regulate their speed, to co-ordinate with traffic-light timing, it will also minimise being stopped by a red light, easing frustration and saving motorists fuel,’ Amey’s technical director for intelligent mobility, Paul Rose, told the Times

‘By allowing drivers to regulate their speed, to co-ordinate with traffic-light timing, it will also minimise being stopped by a red light, easing frustration and saving motorists fuel,’ he added.

‘This can be achieved without the need for significant amounts of new infrastructure.’

a, help, lights, That, traffic, you
You may also like: