With global temperatures around the world continuing to rise, the demand for air conditioning in buildings is growing.

But air conditioning does not come cheap, with estimates suggesting that running a 10KW air conditioner costs around 38p/hour in the UK.

Scientists from Kyung Hee University in Seoul believe they may have the solution to this issue, in the form of a transparent window coating.

The coating lowers the temperature inside buildings, without expending a single watt of energy, according to the researchers. 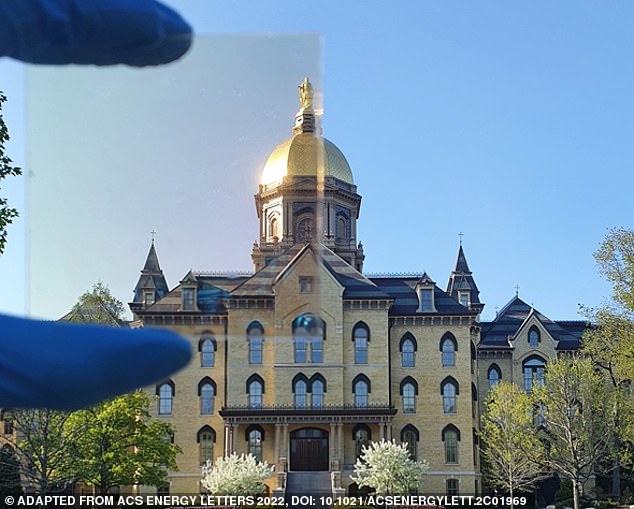 Scientists from Kyung Hee University in Seoul have developed a window coating that lowers the temperature inside buildings, without expending a single watt of energy

World’s whitest paint could be more effective than air conditioning

Engineers in the US claim to have created ‘the whitest paint yet’.

The ultra-white coating, developed at Purdue University, reflects up to 98.1 per cent of sunlight while sending away infrared heat.

Currently, paints on the market designed to reject heat only reflect between 80 and 90% of sunlight. 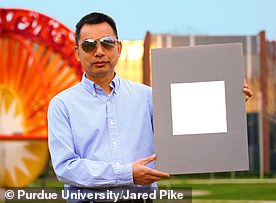 Xiulin Ruan, a Purdue University professor of mechanical engineering, holds up his lab’s sample of the ‘whitest paint on record’

Previous studies have estimated that cooling accounts for around 15 per cent of global energy consumption.

In normal glass windows, the sun’s ultaviolet and infrared light is able to pass through, causing the room to heat up.

To prevent this, the team set out to develop a window coating that could block the sun’s ultraviolet and infrared light.

They also aimed to make a coating that could radiate heat from the window’s surface at a wavelength that passes through the atmosphere into outer space.

‘However, it’s difficult to design materials that can meet these criteria simultaneously and can also transmit visible light, meaning they don’t interfere with the view,’ the team, led by Eungkyu Lee, explained in a statement.

The team’s ‘transparent radiative cooler’ consists of alternating thin layers of silicon dioxide, silicon nitride, aluminum oxide or titanium dioxide on a glass base, topped with a film of polydimethylsiloxane.

Using machine learning, the researchers were able to optimise the type, order and combination of layers.

‘This produced a coating design that, when fabricated, beat the performance of conventionally designed TRCs in addition to one of the best commercial heat-reduction glasses on the market,’ they explained.

The researchers predict that, in hot and dry cities, the TRC could reduce cooling energy consumption by a whopping 31 per cent, compared with conventional windows.

And the window coating isn’t just limited to buildings.

It could also be applied on car and truck windows to keep vehicles cool, according to the team.

The study comes shortly after engineers in the US created ‘the whitest paint yet’ – which they say will help tackle global warming.

The ultra-white coating, developed at Purdue University in Indiana, reflects up to 98.1 per cent of sunlight while sending away infrared heat.

Currently, paints on the market designed to reject heat only reflect somewhere between 80 and 90 per cent of sunlight.

Paints could offer an environmentally-friendly way of reducing the power required to keep them constantly running in balmy weather.

Back to the future! Woman talks to past self in 'trippy' conversation