Follow
Home » Science » Trout are addicted to meth in our rivers, study warns

Trout are addicted to meth in our rivers, study warns

Fish are getting addicted to CRYSTAL METH: Brown trout exposed to illegal drugs flushed into rivers and streams by humans for just two months show signs of addiction, study warns

Fish are in danger of becoming addicted to methamphetamine when traces of the drug enter our rivers, a new study warns.

Researchers in the Czech Republic performed lab experiments with the brown trout (Salmo trutta) in waters contaminated with the illegal drug.

After immersion in the meth-contaminated waters, the team found the fish became less active, but also displayed disturbing levels of dependence.

Meth – which comes in several different forms including tablets, powder and crystals – enters our waterways directly from the drug user in their home. 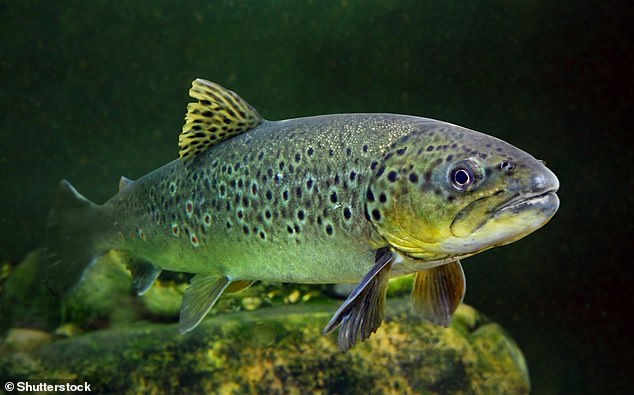 The research has been conducted by experts at the Czech University of Life Sciences Prague in the Czech Republic.

‘Users of these substances excrete them into the sewage collection systems, then the substances enter the wastewater treatment plants that were not designed to treat such contamination.

Drug addiction could potentially drive fish to congregate near unhealthy water treatment discharges ‘in search of a fix’.

Methamphetamine is a powerful, highly addictive stimulant that affects the central nervous system.

The illegal drug can come in several different forms – tablets, powder or crystals.

The tablets are sometimes referred to as yaba and the smokeable crystals are often called crystal meth or ice.

Depending on its form, methamphetamine can be swallowed, snorted or injected.

Meth use can lead to very strong psychological and physical dependence.

In humans, methamphetamine causes increased activity and talkativeness, decreased appetite, and a pleasurable sense of well-being or euphoria.

While meth is illegal, prescribed drugs such as fluoxetine – also known as Prozac – can ’embolden’ fish and alter their behaviour when in our waterways, studies show.

For their study, the researchers isolated brown trout in a water tank for two months laced with one microgram (μg) of methamphetamine – a level of meth that has previously been found in freshwater rivers.

They then transferred the fish to a freshwater tank, but offered them a choice between freshwater or water containing methamphetamine every alternate day for 10 days.

The researchers thought that if the fish had become addicted to the low levels of meth in their water, they would be feeling the effects of withdrawal and would seek the drug when it was available.

For the first four days, fish that had been in the drug-laced tank for two months were more likely to choose to return to a meth-laced tank than fish who had not had the long exposure to meth, the team found.

During that time, the fish with long term drug exposure were less active than the control fish, and researchers found evidence of the drug in their brains 10 days after significant exposure.

From the results, it seems that even low levels of illicit drugs in our waterways can badly impact the animals that reside there.

‘The elicitation of drug addiction in wild fish could represent another example of unexpected pressure on species living in urban environments,’ Horký said.

The study has been published in the Journal of Experimental Biology.

Kings College scientists working with the University of Suffolk collected water samples at 15 sites at five rivers around Suffolk.

The authors said ‘surprisingly’ they found cocaine in every single sample – while the party drug ketamine and other pharmaceuticals were also found in freshwater shrimp.

‘We might expect to see these in urban areas such as London, but not in smaller and more rural catchments.

‘The presence of pesticides which have long been banned in the UK also poses a particular challenge as the sources of these remain unclear.’

In all 56, different substances were detected – and the drug of abuse, cocaine, was the most commonly found along with lidocaine.

Lidocaine has legal uses as a local anaesthetic in dentistry, but is also often used illicitly to ‘cut’ cocaine, as it produces numbness in the gums like cocaine, tricking users into thinking they are getting cocaine which has a similar effect.

Lead author, Dr Thomas Miller from King’s College London said: ‘Although concentrations were low, we were able to identify compounds that might be of concern to the environment and crucially, which might pose a risk to wildlife.’