Twitter will soon let you SWIPE between tweets, topics, and trends

Twitter will soon let you SWIPE between tweets, topics, and trends: Elon Musk confirms the platform is launching new navigation this month

From paid verification to the reinstatement of controversial banned accounts, Elon Musk has made several radical changes to Twitter since acquiring the platform back in October.

Now, the self-proclaimed ‘Chief Twit’ has announced that Twitter’s navigation system will also be changing this month.

The new system will allow users to swipe to switch between tweets, topics, and trends.

Musk confirmed the change on Twitter over the weekend, writing: ‘New Twitter navigation coming in Jan that allows swiping to side to switch between recommended & followed tweets, trends, topics, etc.’

Musk confirmed the change on Twitter over the weekend, writing: ‘New Twitter navigation coming in Jan that allows swiping to side to switch between recommended & followed tweets, trends, topics, etc’

‘Official’ label –  Applied to the verified accounts of commercial companies, who do not subscribe to ‘Twitter Blue for Business’.

‘Automated by…’ label – Account  posts content not produced by a human, and names the person responsible for it.

Professional category labels – Descriptive labels chosen by the account holder, who has signed up for a ‘Professional Account’. This is a free upgrade users can apply for commercial accounts providing they fit a set of criteria.

As it stands, Twitter users are able to tap the star icon in the top right corner of the screen to switch between a chronological timeline and the Home timeline, which displays recommended tweets.

However, last month Musk hinted that a new navigation system was in the works.

On December 20, he tweeted: ‘Main timeline should allow for an easy sideways swipe between top, latest, trending and topics that you follow.

‘Twitter search nav already sorta does this after you search.’

Musk’s latest tweet suggests this new functionality could be imminent, although he is yet to confirm a release date.

In response to the news, some users have questioned whether the new navigation is the right thing to do.

One user replied: ‘The chronological order is always a must tho.’

However, Musk defended the decision, replying: ‘It’s good to switch back & forth.

The news comes shortly after some Twitter accounts had their profile pictures changed from a circle to a square shape with rounded corners.

These are being added to verified business accounts on the platform as another way to differentiate them along with the new system of coloured checkmarks.

The square profile pictures appear within the Twitter feed as well as on the account’s own page, alongside a gold tick to ensure any user of its legitimacy.

Accounts with blue ticks still have a circular profile picture. 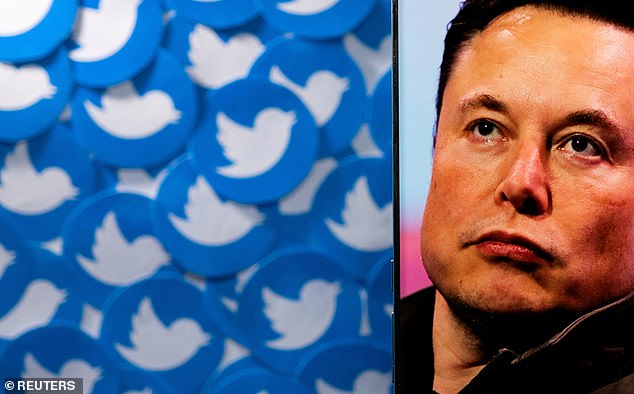 From paid verification to the reinstatement of controversial banned accounts, Elon Musk has made several radical changes to Twitter since acquiring the platform back in October

But these aren’t the only two profile picture shape options, as Twitter Blue subscribers who own an NFT can display it as a hexagonal profile picture.

This is a new upgrade option currently being rolled out to certain verified accounts, but it is unclear whether they actively signed up to it or not.

It is also unclear how one applies for this service or how much it costs, but a Twitter blog does state that it will ‘share any new criteria, pricing or process as we update them’.

Experts predict users will get sick of BeReal, and Twitter will crumble under Elon Musk’s reign – but say TikTok will only continue to grow

October 27: Musk is officially made the new owner of Twitter, and tweets ‘the bird is freed’.

November 1: Musk confirms plans to change the system of ‘Blue Tick’ verification on Twitter, for a reduced subscription fee of $8 a month.

November 4: Musk lays off half of Twitter’s workforce as an alleged cost-cutting measure, claiming he had ‘no choice.’

November 11: The Twitter Blue service is paused due to accounts purchasing verification and using it to impersonate brands and public figures.

November 12: Musk fires 80 per cent of Twitter contractors without warning.

November 15: Musk fires employees that posted negatively about him on the business messaging app Slack. The lawsuit between Musk and Twitter is dismissed.

November 16:  Twitter staff are told they need to sign a pledge to be able to stay on in their roles where they would be ‘working long hours at high intensity’ or receive three months of severance pay, resulting in a mass exodus.

November 18: A news-ticker was projected onto Twitter HQ in San Francisco dubbing Musk as a ‘space Karen’, ‘mediocre manchild’ and ‘bankruptcy baby’.

November 23: A Twitter user reported that 5.4 million phone numbers and email addresses leaked on the dark web, before his account was suspended.

November 26: Financial Times revealed that 50 of the platform’s top 100 advertisers have paused their ads.

November 29:  Platformer reported that Twitter is in the process of reinstating around 62,000 banned accounts that each have more than 10,000 followers.