The truth is out there! More than 40% of Americans now believe some UFO sightings are alien spacecraft – up from just a third of the country two years ago

More than two-fifths of all Americans now believe that some UFOs are alien spacecraft, up significantly since 2019, according to a newly published poll.

According to a Gallup poll conducted between July 6-21, 41 percent of people now believe some UFOs ‘involve alien spacecraft from other planets,’ up from 33 percent in 2019.

Conversely, just half of all Americans, down from 60 percent in 2019, are skeptical, saying these unexplained sightings can be answered via human activity or natural phenomena. 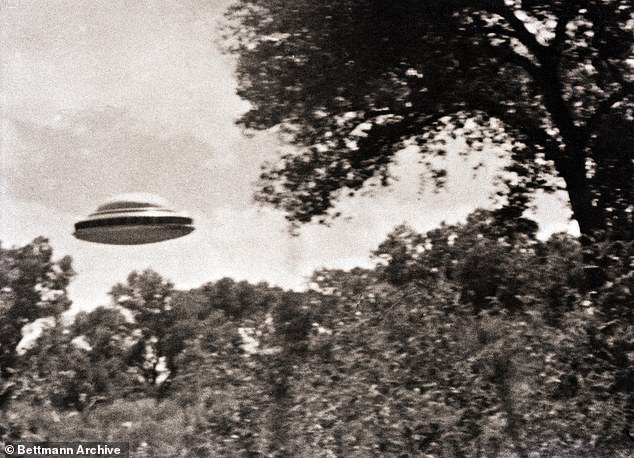 Significantly more Americans now believe that some UFOs are spacecraft, up significantly since 2019, according to a new poll According to a Gallup poll conducted between July 6-21, 41% of people now believe some UFOs ‘involve alien spacecraft from other planets,’ up from 33% in 2019

‘With more mainstream news coverage of UFOs in recent years, and the government taking sightings more seriously, the idea that UFOs could be alien spacecraft doesn’t seem as far-fetched to Americans as it did even two years ago,’ Gallup wrote in the release.

‘Meanwhile, the government seems more focused on determining if the threat is coming from foreign governments rather than other planets, and half of Americans continue to presume there is an Earth-based explanation for all such sightings.’ 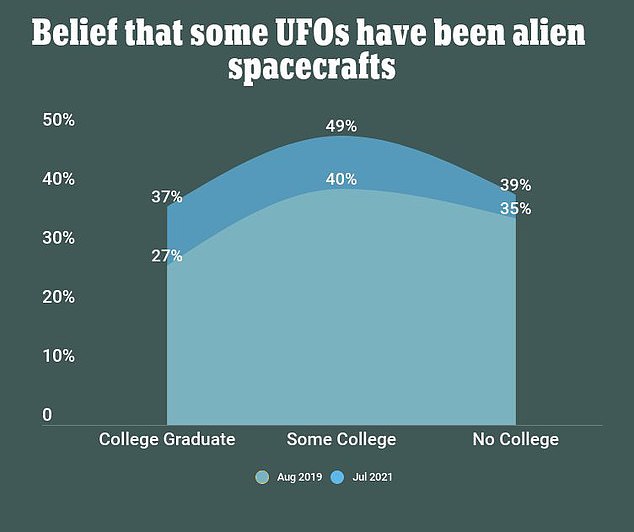 Breaking down the data further, 37% of college graduates believe that some UFOs are alien craft, up from 27% in 2019. Forty-nine percent of respondents with ‘some college education’ believe the objects are from another world, up from 40% and those with no college education rose four points to 39%

Gallup polled 1,007 US adults for the survey approximately two weeks after the Pentagon released its highly controversial report on unidentified aerial phenomena.

Breaking down the data further, college graduates – who used to be the most skeptical in believers of extraterrestrial life – want to believe.

Now, 37 percent of college graduates believe that some UFOs are alien craft, up from 27 percent in 2019.

Forty-nine percent of respondents with ‘some college education’ believe the objects are from another world, up from 40 percent two years ago.

Those with no college education rose four points to 39 percent, which Gallup said is ‘not a statistically significant change.’

Men are becoming more likely than women to believe there is life outside of Earth, with 44 percent of males believing UFOs are alien craft, up from 34 percent in 2019.

Thirty-eight percent of women now believe UFOs are from another world, up from 33 percent in 2019. 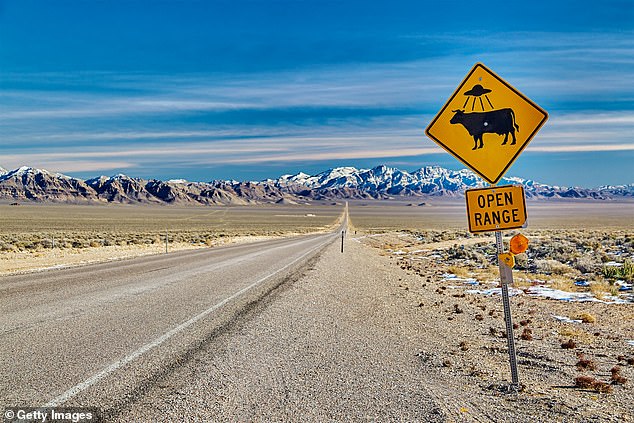 Men are more likely than women to believe there is life outside of Earth, at 44% of males compared to 38% for women, the survey found

Amongst age groups, 18-34-year-olds and 35-54-year-olds are the most likely to believe Earth has been visited by an extraterrestrial craft, at 45 percent, up 13 percent since 2019.

Thirty-seven percent of those who are 55 and older believe the objects are alien in nature.

A similar survey published in July said two-thirds of all Americans believe extraterrestrial life exists, but almost 90 percent believe they are not a threat.

In June, Pentagon released its report on the subject of ‘unidentified aerial phenomenon’ (UAPs), however it offered no explanation for 140 of the 144 observations dating back to 2004.

The declassified June 25 report, which came from the Office of the Director of National Intelligence, added that it lacks sufficient data to determine the nature of mysterious flying objects.

‘Some UAP appeared to remain stationary in winds aloft, move against the wind, maneuver abruptly, or move at considerable speed, without discernable means of propulsion. In a small number of cases, military aircraft systems processed radio frequency (RF) energy associated with UAP sightings.

‘The UAPTF holds a small amount of data that appear to show UAP demonstrating acceleration or a degree of signature management. Additional rigorous analysis are necessary by multiple teams or groups of technical experts to determine the nature and validity of these data.

‘We are conducting further analysis to determine if breakthrough technologies were demonstrated.’

The term UFO has been more recently replaced by unidentified aerial phenomenon, especially in light of the US Pentagon declassifying three videos in April 2020.

The footage had been previously acknowledged as real by the Navy, and captured what pilots recorded on their video sensors during training flights in 2004 and 2015.

Two of the clips were first published in 2017 by the New York Times and the third by the To The Stars Academy in 2018 – a group that specializes in unexplained phenomenon and was founded by Blink-182 guitarist Tom DeLonge.

The only one that can be explained with ‘high confidence’ is a deflated balloon.

Because the reported UAPs showed unusual flight characteristics and displayed a range of appearances and behaviors, the report groups the UAPs into five categories.

1. Airborne clutter – These objects include birds, balloons, recreational unmanned aerial vehicles (UAV) or airborne debris like plastic bags that muddle a scene and affect an operator’s ability to identify true targets, such as enemy aircraft.

3. USG or U.S. industry developmental programs –  Some UAP observations could be attributable to developments and classified programs by U.S. entities. The report states, ‘We were unable to confirm, however, that these systems accounted for any of the UAP reports we collected.’

4. Foreign adversary systems – Some UAP may be technologies deployed by China, Russia, another nation, or a non-governmental entity but the report says the US is unaware that any nation has technology that’s been reported.

5. A catchall ‘other’ bin – Most of the UAP described in the dataset probably remain unidentified due to limited data or challenges to collection processing or analysis and may require additional scientific knowledge and advances to categorize them. ‘The UAPTF intends to focus additional analysis on the small number of cases where a UAP appeared to display unusual flight characteristics or signature management,’ according to the report.

a, Americans, of, Two-fifths, UFOs
You may also like: