Two orcas are spotted off the coast of CORNWALL: Killer whales named John Coe and Aquarius are the first to be seen in the area in over a decade

A pair of killer whales named John Coe and Aquarius have been spotted off the coast of Cornwall for the first time in over a decade by a group of wildlife experts.

This is the first sighting of the UK’s only resident population of orcas travelling this far south, according to Cornwall Wildlife Trust experts.

They were spotted on Wednesday swimming off the west coast of Cornwall, near the Minack Theatre, an open air theatre perched on the cliffs of Penzance.

The orcas were identified as part of the UK group by the shape and notches of their dorsal fins, and patches of colouration near their eyes and on their backs. 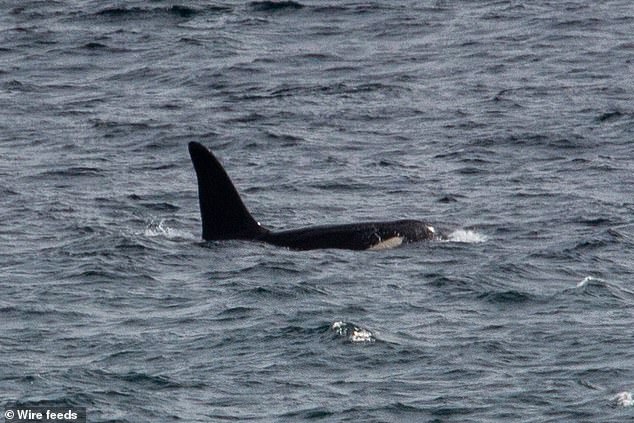 The killer whale named Aquarius was spotted off the west coast of Cornwall. This is the first sighting of the UK’s only resident population of orcas travelling this far south, according to Cornwall Wildlife Trust experts

ORCAS: THE LARGEST MEMBER OF THE DOLPHIN FAMILY

Orcas, commonly known as killer whales, are the largest members of the dolphin family of marine mammals.

The species is recognisable by its black body with a white underside and patches found near to each eye.

They survive on a diverse diet of fish and marine mammals, but populations specialise on certain types of prey.

Some groups will feed on nothing but fish, while others will hunt for other types of marine mammals including seals, whales and even dolphins.

Adding the pictures also allowed experts to confirm these ‘rare and beautiful individuals’ were John Coe and Aquarius.

‘This is the first official orca record in our databases with associated photos in over a decade,’ she explained.

Adding that it is ‘further proof of the value of our coastal seas in supporting these magnificent creatures.’

This is a specialised pod of eight individuals from the Hebrides.

They can be distinguished from other groups of orcas by their unusual sloping eye patch and larger size.

Although they are regularly monitored, some have not been seen in recent years and there have been no calves observed since monitoring began in the 1990s.

According to the Hebridean Whale and Dolphin Trust, the pod faces the risk of extinction as a direct result of human activities.

This includes exposure to high levels of now-banned PCB chemicals which have caused poor health and infertility within the pod.

Type A is a “typical” killer whale with the large black and white form and a medium white eye patch.

Type B is smaller than type A and with a large white eye patch and more medium grey colourings on its body.

Type C is the smallest but lives in larger groups. It has a slanted eyepatch rather than parallel.

Type D is unique with a narrower and shorter dorsal fin, a bulbous head and smaller teeth than other orcas.

Ms Crosby added: ‘This pod, and the issues it faces with infertility and future extinction, should be a huge wake-up call to the public that we must protect these creatures better in our waters.’

The West Coast group is normally made up of four males and four males, residing int he Hebrides in Scotland, so it is unusual to see them so far south.

The four males in the group are John Coe, Floppy Fin, comet and Aquarius, with four females known as Nicola, Moneypenny, Puffin and Occasus.

It is thought Nicola may be the mother of John Coe, who has previously been dubbed the ‘loneliest killer whale in the world’.

This is because killer whales don’t interbreed within their own pod and rely on finding other pods to socialise and mate, but the West Coast Community are completely isolated from others of their type of orca.

There is a Northern Isles Community of killer whales north of the Shetland Islands, but they are a different sub-species, so the two groups don’t mate or interact.

It is thought that John Coe and Aquarius may be on a jaunt to find a mate, on a rare trip travelling away from their mother and wider pod.

HOW COMMON IS IT FOR KILLER WHALES TO HUNT DOLPHINS?

Killer whales, also known as orcas and blackfish, are one of the top predators in the sea.

They are apex predators that have been known to eat most animals, including large sharks.

Highly intelligent and social creatures, they work as a pack to hunt and kill their prey.

Orcas are considered the largest species of the dolphin family.

The predators’ diet can vary depending on region but they have been known to eat anything from sea birds and squid to sharks and even moose.

Dolphins do make up a portion of their diet, but footage of it is uncommon.

Dolphins are normally faster swimmers than the larger killer whale, but the orcas will work as a pack to hunt.

Operating in their pod, killer whales have been observed working in spaced out groups to isolate dolphins.

Eventually, the dolphin becomes exhausted and runs out of energy.

Once their prey is no longer able to outrun them, the killer whales rush in and charge the dolphin, hitting it or flipping it into the air in order to immobilise it before going in for the kill.

are, OFF, orcas, spotted, the, two
You may also like: