A construction worker was on site in Buenos Aires, the capital of Argentina, when he and his crew spotted a strange black object overhead. The worker was quick to grab his mobile phone and begin filming the circular object above. Prominent conspiracy theorist Scott C Waring believes the sighting is proof of alien visitors, and the fact the man apparently looked straight at it is evidence that extraterrestrials have an “aura” about them.

Mr Waring wrote on his blog ET Database: “The man said he was working on a foundation of building when he and his co-workers saw this black ring object flying over head.

“Had this been a balloon it would be flipping like a wheel end over end. This one seems to stay flat, unlike any balloon I have ever seen.

“Often when a UFO is nearby, people and animals sense its presence. I mean often they have an emotional aura that either pushes a person to look up and see it, or even make you relax almost in a trance meditative state.

“You have to seen one first had and feel it to know what I’m saying. Not all UFOs have this aura, but many do.” 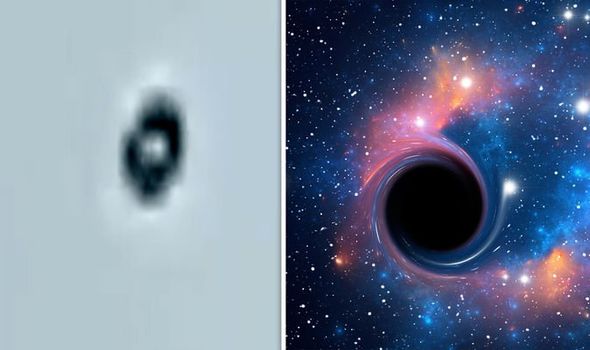 Argentina is something of a hotspot for UFO sightings, so much so that a UFO ‘landing pad’ was built in the wilderness of Argentina by a man who claims aliens told him to create the site.

The strange monument is believed to have been built by a Swiss man called Werner Jaisli.

The landing pad is a collection of white and brown rocks placed in the shape of an ‘ovniport’ – a monument which resembles a star which conspiracy theorists have linked with extraterrestrial activity.

Mr Jaisli built the monument in the Argentinian desert just outside of the small town of Cachi in the province of Salta.