People in rural parts of the UK who are testing SpaceX’s Starlink satellite broadband network have responded positively, with one user calling the service ‘amazing’.

UK users have reported huge jumps in speed after switching to Starlink, which is operated by SpaceX – the firm owned by billionaire entrepreneur Elon Musk – and powered by a constellation of more than 1,000 satellites over Earth.

Testing of Starlink was recently opened up to UK residents desperate for a better connection in certain parts of the country, while other areas have been told to expect coverage arriving sometime in mid to late 2021.

A Starlink kit – consisting of a Starlink dish Wi-Fi router, power supply, cables and mounting tripod – comes through the post, but it’s ‘available to a limited number of users per coverage area’.

Early testers claim to have achieved download speeds of up to 215 megabits per second (Mbps), making common activities like streaming possible from multiple devices at the same time.

In contrast, some users say their traditional broadband would often lag between 0.5 and 1Mbps, only capable of basic tasks such as email.

Starlink doesn’t come cheap however – a Starlink user has to pay £439 for the hardware kit and an extra monthly cost of £89.

This compares with an average monthly UK broadband price of £27.39 from cable-based providers, according to comparison website Cable. 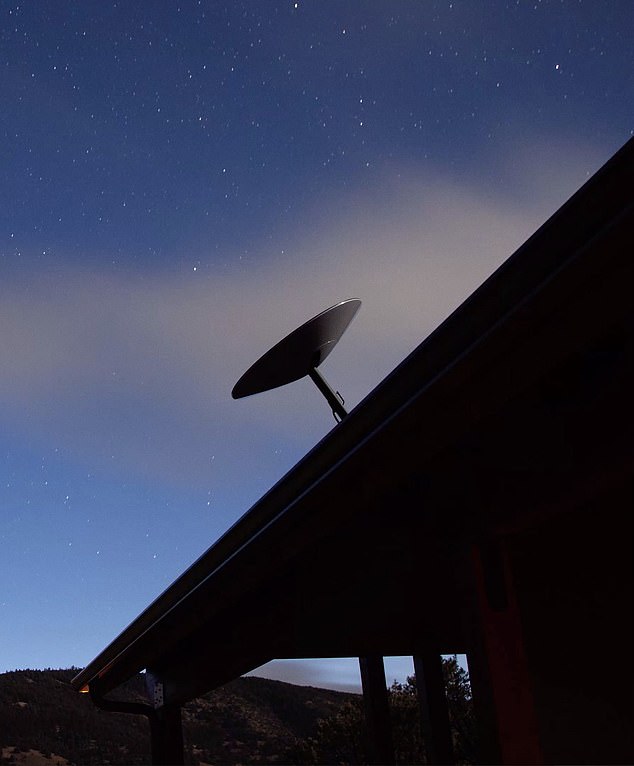 Pictured, a Starlink dish, which is part of the kit for users of the service. SpaceX aims to beam high-speed internet to those left behind by traditional cable-based providers. A Starlink user has to pay £439 for the hardware kit and an extra monthly cost of £89

Starlink came to the UK after regulator Ofcom issued it a satellite network licence on November 16 last year.

MailOnline has contacted Ofcom regarding exactly which areas the service is currently being offered in.

Currently anyone can go to the Starlink website, enter their address and place an order for a Starlink kit.

However, users in urban areas are likely to get the message ‘Starlink is targeting coverage in your area in mid to late 2021’ as the initial beta service seems to be prioritising rural areas.

Aaron Wilkes, who lives in Bredgar, Kent, is one of the early beneficiaries of Starlink in the UK.

He told the PA news agency that his household’s fixed line should achieve about 20Mbps – significantly less than the 71.8Mbps national average reported by Ofcom for May 2020.

‘We moved up to this small village and it was an absolute ball ache when we got our slow connection here,’ Wilkes said.

Ultrafast: 300 Mbps. Can handle multiple online activities for multiple users at once without major interruptions in service.

Superfast: 30 Mbps. Under ideal conditions this will be sufficient for your average internet user.

The UK government recommends a minimum of 10 Mbps per household or business, as per its Universal Service Obligation (USO) for broadband.

Using Starlink, he receives an average of 175Mbps, and up to 215Mbps, meaning games can be downloaded in little over an hour.

On a previous occasion, a game started downloading at the snail’s pace of 0.5Mbps, so he ‘gave up because there was no point’.

‘The ability to be able to download content so quickly compared to our standard BT line is amazing,’ said Wilkes.

Another UK user, Martin Langmaid, set up his mother’s home near the Devon village of Dunsford with Starlink because she needed it to run her businesses.

‘She moved into the countryside to be nearer to my brother, who is a farmer,’ Langmaid told PA.

‘Modern-day business requires internet, you can’t get away from it, so that’s what she needed.

However, he said they are using a mix of Starlink and 4G, as the satellite outages have an impact on real-time tasks like video conferencing.

‘I think a lot of people will do something similar, where they will leave their DSL [digital subscriber line] in place at the moment or have 4G, combine it with Starlink,’ Langmaid told PA. 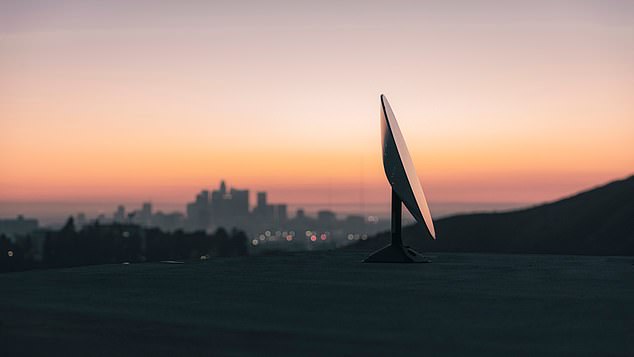 Starlink says: ‘During beta, users can expect to see data speeds vary from 50Mb/s to 150Mb/s and latency from 20ms to 40ms in most locations over the next several months as we enhance the Starlink system’

‘Once Starlink has the capacity there, the outages should ultimately disappear once the coverage is in place, then that’s when I think people start cancelling things like DSL and 4G dongles.’

Wilkes, on the other hand, is waiting for his landline contract to end so he can cancel it completely.

‘I’ve not touched it [the fixed line]. Everything has been switched over – Sky TV, all the Alexas, phones, tablets, are all now over on Starlink,’ he said.

‘The interesting thing is, over the months I’ve had it I’ve gone from having 127 minutes of downtime, probably down to about four to five minutes a day now.

‘And that’s usually overnight when they’re doing updates so you don’t even see it.’

Musk (pictured) reportedly wants to have tens of thousands of his satellites in space eventually, enabling a seamless connection for all users

Starlink is now delivering its initial beta service internationally, and will continue expansion to ‘near global coverage of the populated world’ in 2021.

Musk said on Tuesday that he expects Starlink’s speed to double to around 300Mbps and coverage for ‘most of Earth’ by the end of the year, followed by ‘all’ in 2022.

The last load of 60 satellites to be sent into space were launched only last week.

SpaceX has now launched 1,145 Starlink satellites in total, although about 60 have been decommissioned and deorbited.

During the current beta test, users can expect to see data speeds vary from 50Mb/s to 150Mb/s and latency from 20ms to 40ms in most locations over the coming months. 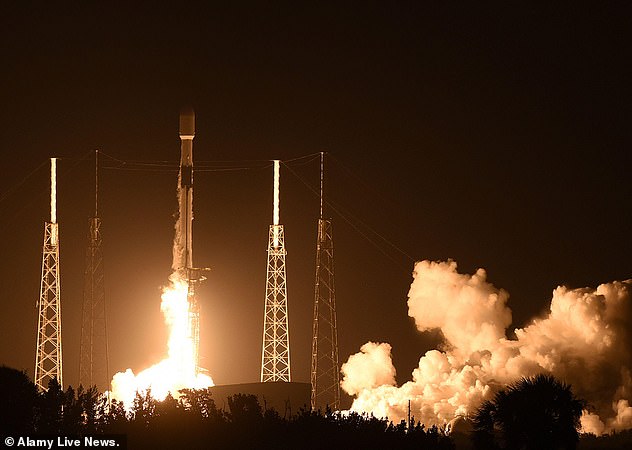 Starlink already has ‘over 10,000 users’ worldwide for its beta service, according to Musk, who wants to have tens of thousands of his satellites in space eventually, enabling a seamless connection for all users.

SpaceX has also been approved by the US’s Federal Communications Commission (FCC) to launch more than 12,000 Starlink satellites in total.

There are some drawbacks for users, however – as well as the hefty cost, there are planned outages due to the limited number of satellites and the fact that Starlink is still in early testing.

The Starlink website reads: ‘There will also be brief periods of no connectivity at all.

However, those who have suffered with sluggish internet say it is a price worth paying.

Existing providers seem to be considering satellite as a possible answer for rural areas too, with BT in early talks with government-backed satellite firm OneWeb.

Ofcom believes that around 190,000 premises are unable to receive a decent broadband service, which it defines as offering download speeds of 10 Mbps and upload speeds of one Mbps.