Follow
Home » Science » Venus Lacks Plate Tectonics. But It Has Something Much More Quirky.

Within the next decade or so, Venus will be visited by a fleet of spacecraft. This grand tour of the second planet, the likes of which hasn’t been seen since the Cold War, is being driven by the quest to solve a profound planetary puzzle. Earth and Venus are the same size, are right next to each other and are made of the same star stuff. But Earth became an oasis while Venus became an acid-flecked inferno. Why?

To derive an answer, every aspect of Venus requires examination. That includes the way its face has metamorphosed over time. Earth has plate tectonics, the gradual migration of continent-size geologic jigsaw pieces on its surface — a game-changing sculptor that crafts an exuberance of diverse volcanoes, giant mountain ranges and vast ocean basins.

Venus doesn’t have plate tectonics. But according to a study published Monday in the Proceedings of the National Academy of Sciences, it may possess a quirky variation of that process: Parts of its surface seem to be made up of blocks that have shifted and twisted about, contorting their surroundings as they went.

These boogying blocks, thin and flat slices of rock referred to as campi (Latin for “fields”), can be as small as Ireland or as expansive as Alaska. They were found using data from NASA’s Magellan orbiter mission, the agency’s last foray to Venus. In the early 1990s, it used radar to peer through the planet’s obfuscating atmosphere and map the entire surface. Taking another look at these maps, scientists found 58 campi scattered throughout the planet’s lava-covered lowlands. 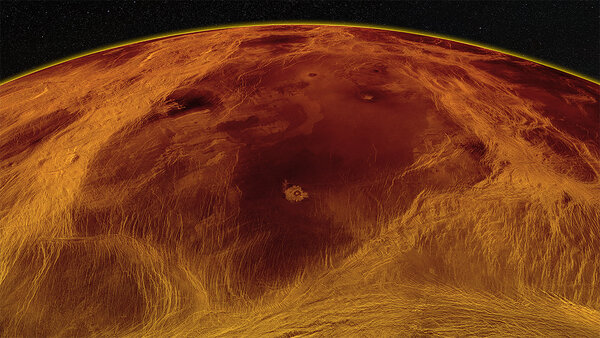 These campi are bordered by lines of small mountain ranges and grooves, features that have also been warped and scarred over time. What made them? According to Paul Byrne, a planetary scientist at North Carolina State University and the study’s lead author, there is only one reasonable explanation: Essentially dragged around by the flowing mantle below, the campi “have been shimmying around the place, just like pack ice.” Campi moving toward immobile land would cause the ground to crumple up, forming mountains. One moving away would have stretched the land, opening grooves. And along these boundaries, campi moving side-to-side would have left strain marks and etchings.

That this deformation took place in the lowlands of Venus is significant: The lava smothering them is anywhere between 750 and 150 million years old, making these landscapes some of the planet’s youngest. That means the tectonic two-step of these campi happened relatively recently in the solar system’s history. But is this dance still happening today?

NASA’s VERITAS and Europe’s EnVision missions will find out. Equipped with their own advanced radar systems, these orbiters will examine these campi in high-resolution, allowing scientists to ascertain if any have shimmied about since the days of Magellan. If they have, then it will further evidence a long-harbored notion: Venus is tectonically active, if not as hyperactive or as dynamic as Earth.

Long ago, Venus had an ocean’s worth of water, for potentially billions of years. This could have made plate tectonics possible, as liquid water permits plates to break, bend and flow. This process also regulates the climate by burying and erupting carbon, preventing worlds from undergoing runaway global warming that would render them uninhabitable.

But one of several possible apocalypses — perhaps multiple volcanic cataclysms — turned Venus into an arid hellscape, and its plate tectonics would have shut down. Consequently, for the past billion years or so, the entire planet’s surface was a solitary, stagnant and largely static plate.

But that doesn’t mean the planet has become quaver-free. Thanks to missions like Magellan, scientists have previously spotted fault networks, rift zones and mountain ridges — the scar tissue left by both ancient and somewhat more contemporary movement. If this new study is correct, and entire swaths of Venus have been recently jiggling about, then the planet’s surface “is more mobile than people have conventionally assumed,” said Joseph O’Rourke, a planetary scientist at Arizona State University who wasn’t involved with the work.

Explaining why Venus has this surprising tectonic tempo would have hefty implications. There are countless Earth- and Venus-size worlds in the cosmos, and their tectonic activity will also determine their fates. But “we can’t claim to understand any rocky world in the solar system or beyond if we can’t understand Earth and its nearest neighbor,” Dr. O’Rourke said.