Very premature and very low birth weight babies are more likely to have a lower IQ as adults — losing an average of 12 points, study shows

Adults are more likely to have a lower IQ if they were born either very preterm (at 28–32 weeks) or with a very low birth weight (less than 53 ounces), a study has found.

Researchers from the University of Warwick compared data on the outcomes of term and either very preterm or very low birth weight births from eight previous studies.

They found that adults were likely to have 12 IQ points less if they were born very prematurely or underweight as compared to their peers born at term.

The findings build on previous work that concluded that very preterm or low birth weight babies tend to have lower levels of cognitive performance in childhood.

This, the team suggests, indicates that very preterm or low birth weight children may require additional educational support to boost their learning. 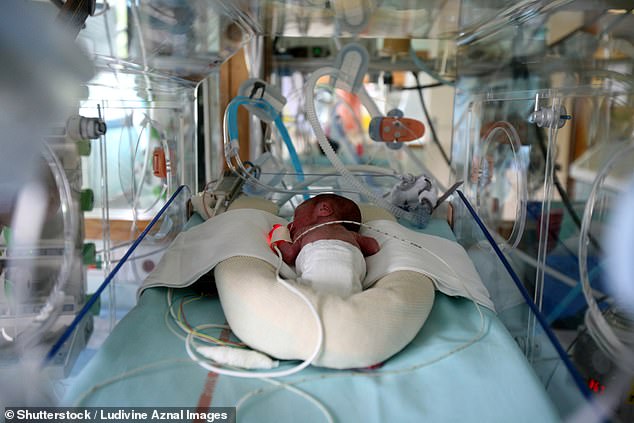 Adults are more likely to have a lower IQ if they were born either very preterm (at 28–32 weeks) or with a very low birth weight (< 53 ounces), a study has found. Pictured: a preterm baby

‘Being born very preterm or at a very low birthweight continues to have a highly significant long term impact on the average IQ,’ said paper author and psychologist Robert Eves of the University of Warwick.

Of these subjects, 1068 were born very preterm or with a very low birth weight — while the remaining 1067 were term born and served as controls.

The data was sourced from eight previous cohort studies — covering five European countries as well as Australia and New Zealand.

‘The multi cohort, international aspect of this research can especially give us confidence in this important finding,’ noted Mr Eves.

The team found that individuals that were born either very preterm or very low birth weight scored an average IQ of 88 — 12 points less than their term-born peers.

Such a difference between the groups remained high — at 9.8 IQ points — even when the team removed those adults who had a childhood learning disability or neurosensory impairment (regarded as having a childhood IQ score below 70).

According to the team, the risk factors associated with lower IQ performance included severe lung problems (or ‘bronchopulmonary dysplasia’), neonatal bleeds into the brain (so-called ‘intraventricular haemorrhage) and lower-educated mothers.

‘These may include reducing bronchopulmonary dysplasia and intraventricular haemorrhage in neonatal care and educational interventions of those born into socially disadvantaged families.’

The full findings of the study were published in the journal JAMA Pediatrics.

EXPLAINED: PREMATURE BIRTH AND ITS RISKS TO BABIES

Around 10 per cent of all pregnancies worldwide result in premature labour – defined as a delivery before 37 weeks.

When this happens, not all of the baby’s organs, including the heart and lungs, will have developed. They can also be underweight and smaller.

Tommy’s, a charity in the UK, says this can mean preemies ‘are not ready for life outside the womb’.

Premature birth is the largest cause of neonatal mortality in the US and the UK, according to figures.

Babies born early account for around 1,500 deaths each year in the UK. In the US, premature birth and its complications account for 17 per cent of infant deaths.

Babies born prematurely are often whisked away to neonatal intensive care units, where they are looked after around-the-clock.

What are the chances of survival?

birth, low, or, premature, very, We
You may also like: