Vets have warned against a disturbing trend that’s been circulating on TikTok, in which people feed hot sauce to their dogs ‘to see their reaction’.

In one video, a dog is clearly in discomfort but continues to chew on the sauce-covered chicken leg due to its innate love for meat.

Another video shows a dog taking a cautious lick before running away in panic as its owner laughs in the background.

The Blue Cross, one of the UK’s leading animal welfare charities, said it was ‘horrified’ to see this latest social media trend.

Chilli in hot sauce can cause pancreatitis – inflammation in the pancreas – in dogs, while other ingredients like onion and garlic are also toxic for canines. 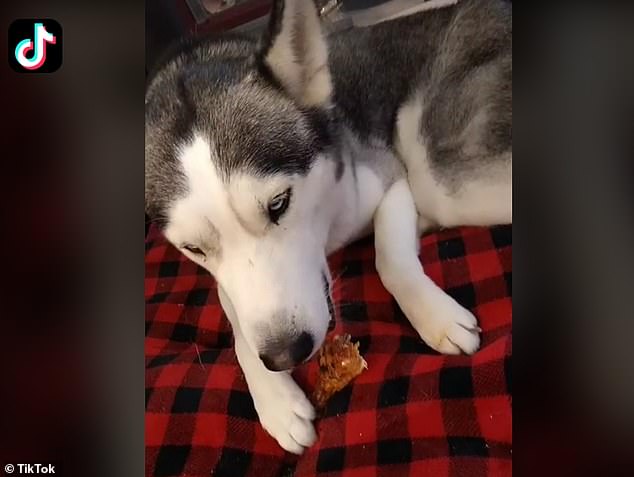 This TikTok user posted two videos to the site to show how much their pet ‘doesn’t care about hot sauce!’. Her poor dog is clearly in discomfort but continues to chew on the sauce-covered chicken leg due to its innate love for meat

‘While the intent is providing your pet with what they perceive as a tasty treat, this could cause them serious pain and discomfort,’ Alison Thomas, head of veterinary Services at the Blue Cross, told MailOnline.

‘Spicy foods should never be fed to our pets as they can cause severe indigestion, vomiting and diarrhoea.

‘Some of the ingredients in sauces like this, onions and garlic for example, can also cause harm and should also never be fed to pets.’

An RSPCA spokesperson also said slammed the ‘very irresponsible’ trend, which could lead to gastrointestinal upsets, as well as pain and discomfort.

‘Unfortunately, we are seeing more and more social media content that is celebrating animal suffering, even inadvertently, and we ask owners to always consider the impact on their pet,’ the spokesperson told MailOnline.

‘A selfie or video clip is never worth causing an animal to suffer. Dogs are sentient beings who can find experiences like this very frightening.’

A TikTok spokesperson told MailOnline that it does not tolerate animal cruelty and is a ‘space for positive and creative expression’.

‘We take action when issues are brought to our attention,’ the spokesperson said.

‘We have banned videos of this nature and content depicting cruelty to animals will be removed.

‘We will continue to monitor this situation for further developments and take action wherever necessary.’

TikTok videos noticed by Business Insider, but since removed from the platform, were captioned: ‘Give your dog something with hot sauce and get their reaction’.

Another user posted two videos to the site – both taken down by the user on Wednesday afternoon – to show how much their pet ‘doesn’t care about hot sauce!’

A vet in the US who posts to TikTok and Instagram under the username @vet_techs_pj as part of a duo, condemned the posts.

His video posted to TikTok shows a dog in hospital with pancreatitis, whose owner ‘just kept giving him more and more’ hot sauce.

‘So you know that trend where you give your dog a piece of chicken with hot sauce on it just to see what their reaction is?’ he says. ‘Now he’s in the hospital with pancreatitis. 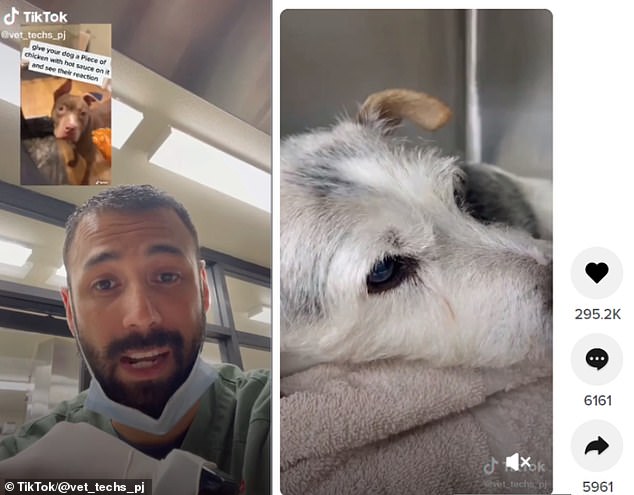 ‘They just kept giving him more and more because I guess his reaction was just “so funny” but now he’s in the hospital with pancreatitis – so stop doing trends with pets!’ he says.

Dr Mary Altomare, a vet at Mount Pleasant Animal Shelter in New Jersey, told Business Insider that spicy food causes ‘great discomfort’ to a dog’s body, including the oral cavity and esophagus – the tube connecting the throat and the stomach.

‘As it travels to their stomach, it can cause further upset such as heartburn and even ulcerations,’ Dr Altomare said.

‘Once it passes through the stomach, pets are likely to experience intestinal cramping and diarrhea.

‘Depending on how sensitive of a stomach your pet has, you may also see some vomiting and subsequent dehydration.’

This is not the first time stupid and potentially lethal trends have spread like wildfire on the popular app, which is owned by Chinese company Bytedance.

Last month, doctors warned people not to replicate the trend of covering one’s face and neck with hot wax before peeling it off when it dries.

Dr Emma Wedgeworth, a consultant dermatologist and a British Skin Foundation spokesperson, told MailOnline: ‘It is clearly not a good idea to cover the whole face with wax.

‘The bottom line is that this is a senseless practice, which has more potential for harm than good and I would not advise it.’

In September last year, dentists had to urge people not to whiten their teeth with undiluted bleach purchased online, which could lead to damaged gums and tooth loss.

Talks are underway between ByteDance, Oracle and Walmart over US operations after Trump threatened a download ban in the US.

against, dangerous, ti, vets, warn
You may also like: