Virgin Orbit’s rocket arrives in Cornwall! 70ft-long LauncherOne vehicle will be carried into space on-board a modified plane next month – marking the first EVER orbital mission from UK soil

The rocket that will be carried into space in the first ever orbital launch from British soil has finally arrived in Cornwall.

LauncherOne, the 70-foot-long launch vehicle, is due to be packed full of satellites and tucked into the belly of Virgin Orbit’s space plane, ‘Cosmic Girl’, next month.

Cosmic Girl will take off from Spaceport Cornwall in Newquay and transport the two-stage orbital launch vehicle to a high altitude.

It will then be ‘horizontally’ dropped before engaging its thrusters to launch itself into space at up to 17,500 mph, where it will deposit the satellites.

The mission, which is on track for a November lift-off, has been named Start Me Up in tribute to the iconic British band, the Rolling Stones. 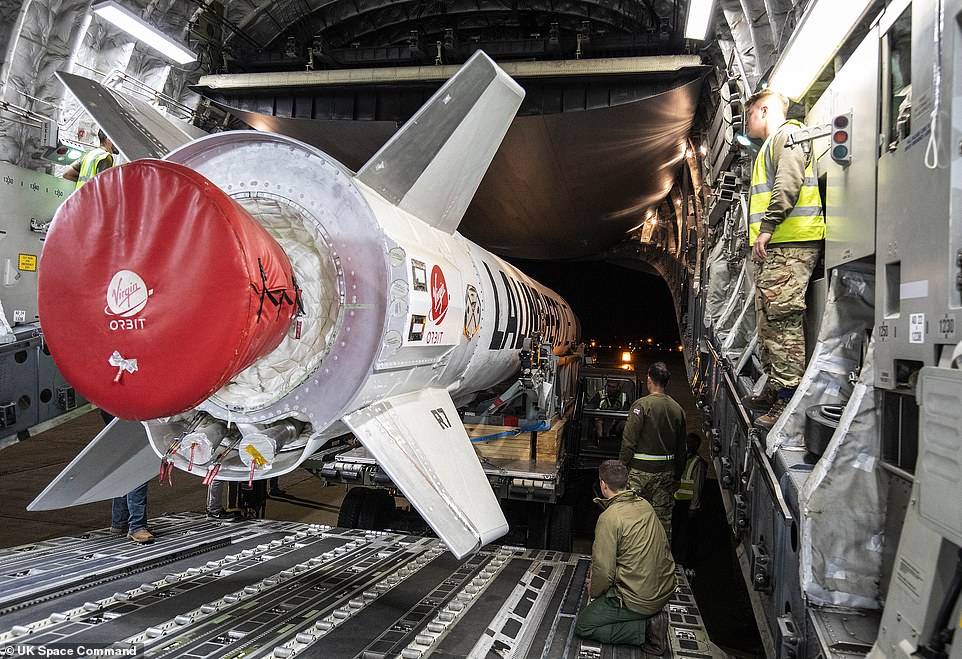 LauncherOne, the 70-foot-long launch vehicle, is due to be packed full of satellites and tucked into the belly of Virgin Orbit’s space plane, ‘Cosmic Girl’, next month 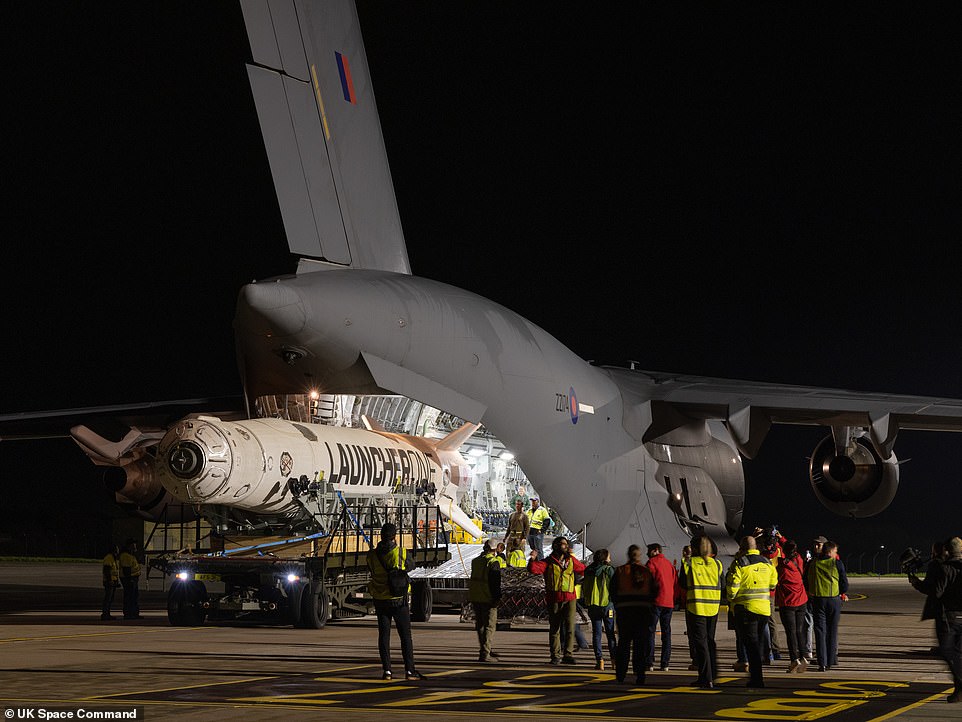 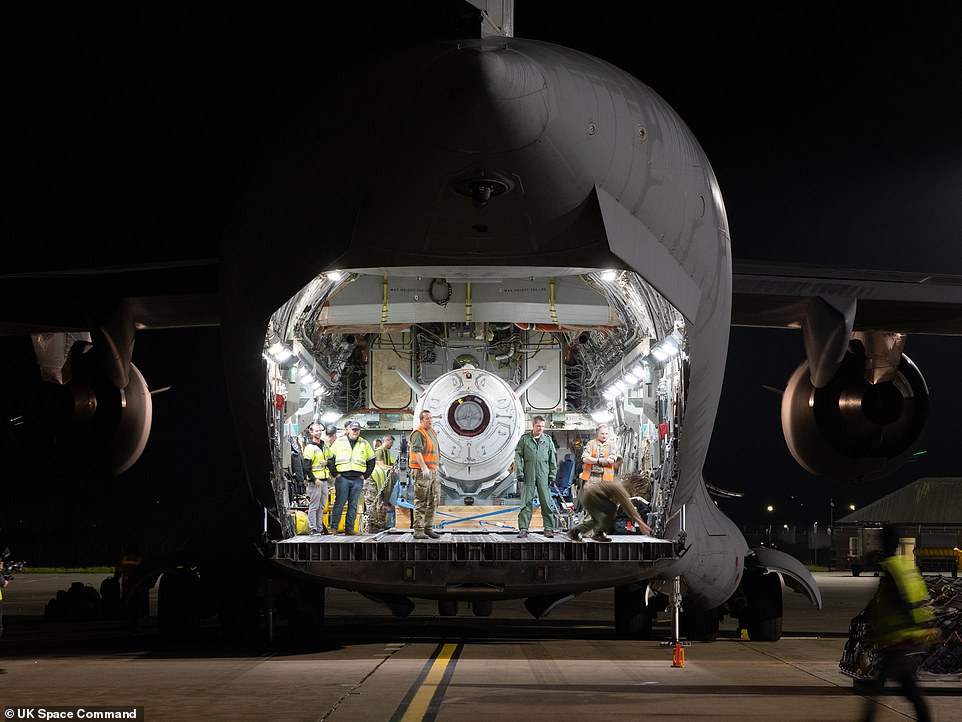 LauncherOne was made at the Virgin Orbit base in Long Beach in Los Angeles County. It was flown to the UK along with the ground support equipment, including the rocket’s fuelling rigs 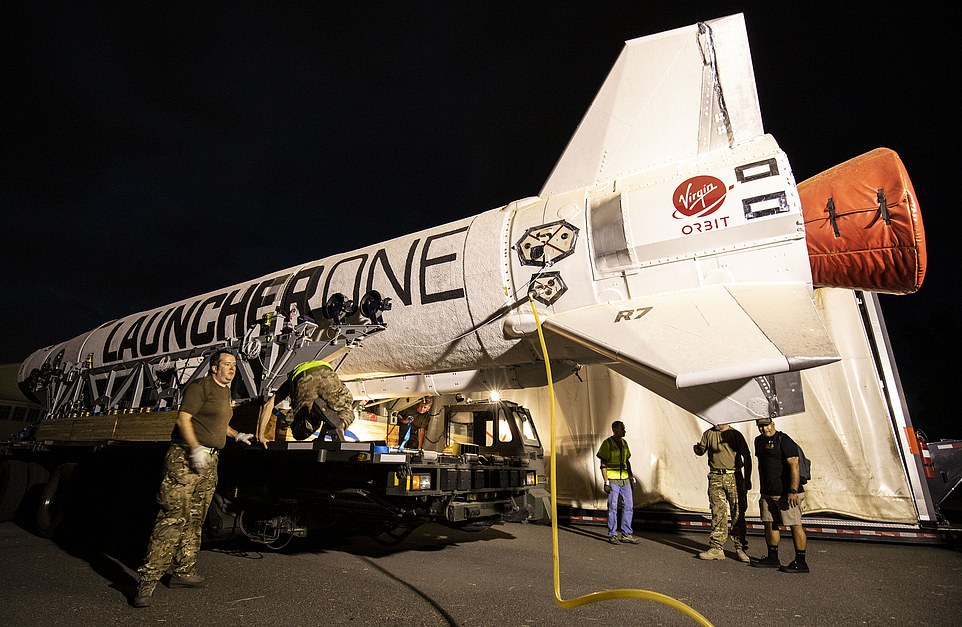 It came after the Cosmic Girl plane, a modified Boeing 747, arrived last Tuesday, and has since begun flight rehearsals

TIMELINE OF FIRST ORBITAL LAUNCHES ON A COUNTRY’S OWN SOIL

(From the French territory, French Guiana)

It will be a momentous occasion, with the UK finally joining the space race some 70 years after the British Space Programme was established in 1952.

LauncherOne was made at the Virgin Orbit base in Long Beach in Los Angeles County.

It has been flown to the UK along with all the ground support equipment, including the rocket’s fuelling rigs.

It came after the Cosmic Girl plane, a modified Boeing 747, arrived last Tuesday, and has since begun flight rehearsals.

Although October 29 is when the window for lift-off opens, the mission has still not received the green light from the Civil Aviation Authority which regulates Britain’s rocket launches, so November, or possibly December, seems more likely for the first flight.

Once Cosmic Girl is at a high enough altitude – around 35,000 feet – LauncherOne will be unleashed.

The rocket will then thrust itself to an orbital altitude where it will deploy the satellites, by catapulting them at 8,000 miles per hour.

This includes the UK government’s two ‘cubesats’ – measuring about 12 inches long, 8 inches wide and 4 inches deep – along with eight other payloads as part of a mission named Prometheus-2.

‘Cubesat 1’ and ‘Cubesat 2’ will provide a test platform for monitoring radio signals including GPS and sophisticated imaging.

Cubesat 1 includes a laser detector, a GPS receiver and a hyperspectral imager – which can capture multiple slivers of pictures over different wavelengths of light.

The cubesats will allow MOD to better understand how the UK and its international partners can work together to create a ‘more capable and flexible system’ at a lower cost.

Sir Richard Branson’s company has already conducted three successful consecutive orbital missions with LauncherOne in 2021 and 2022, the last one in January.

Ian Annett, deputy CEO at the UK Space Agency, said: ‘Seeing Virgin Orbit’s aircraft take off is an exciting reminder that we are close to the first launch from UK soil and first launch of a satellite from Europe.

‘This will be an iconic moment in the history of UK space endeavours, so it is fitting that the mission has been named after a song from the Rolling Stones, one of the UK’s most iconic bands.’

He added: ‘Developing new launch capabilities will build on the strengths of our space sector and attract companies from around the world to benefit from these commercial opportunities.

‘This will catalyse investment, bring new jobs to communities and organisations right across the UK, as well as inspiring the next generation of space scientists and engineers.’ 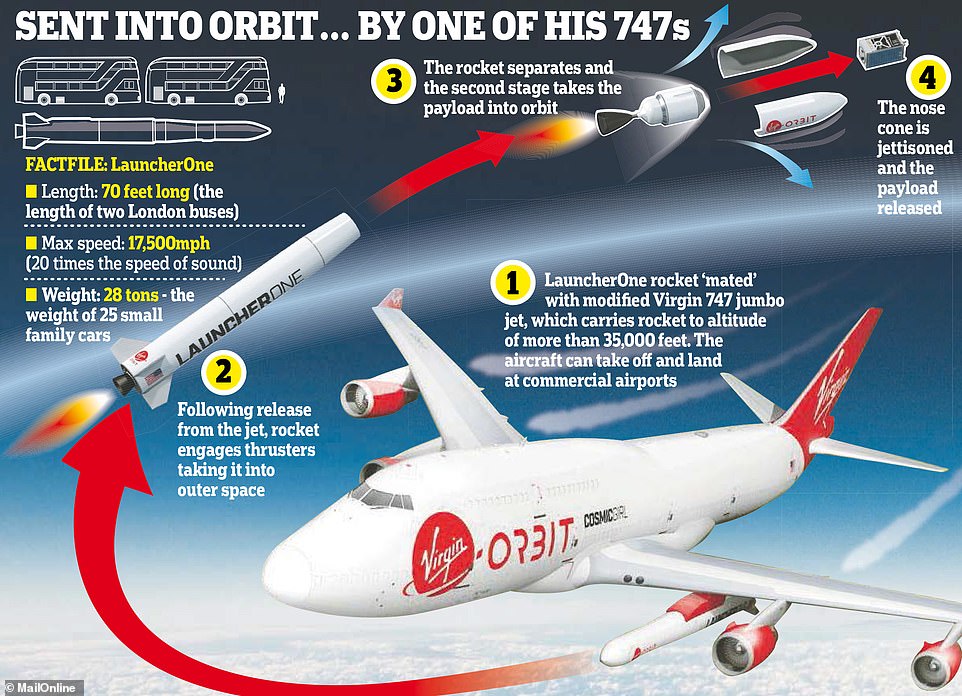 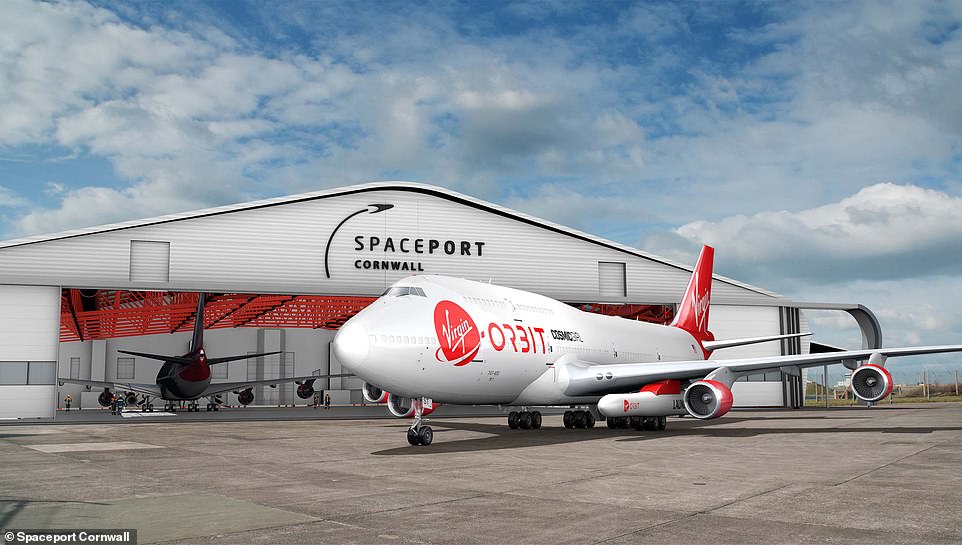 The Cosmic Girl plane, a modified Boeing 747, arrived in Spaceport Cornwall last Tuesday, and has since begun flight rehearsals. 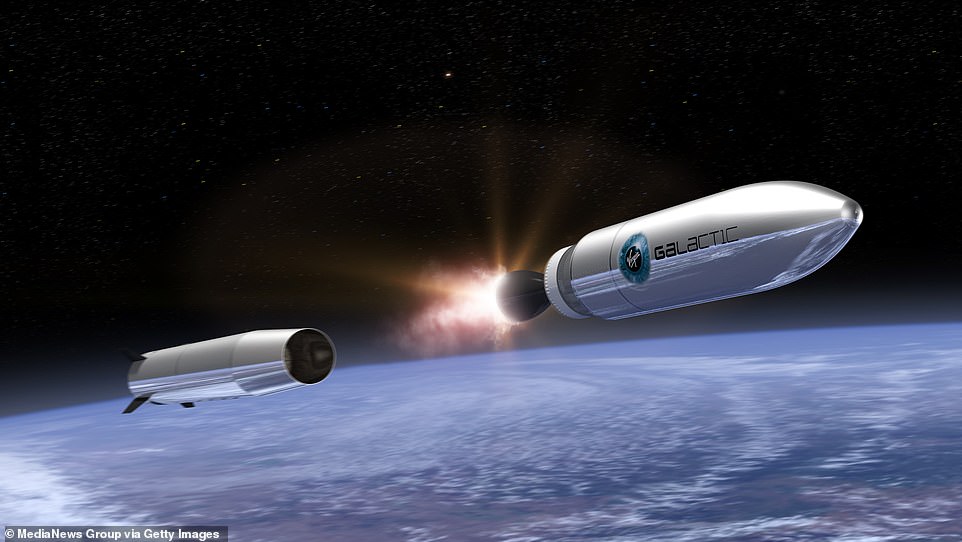 Once Cosmic Girl is at a high enough altitude – around 35,000 feet – LauncherOne is unleashed. The rocket will then thrust itself to an orbital altitude where it will deploy the satellites, by catapulting them at 8,000 miles per hour

1975: 10 nations including the UK founds the European Space Agency

2022: Three UK spaceports – one in Cornwall and two in Scotland – are expected to become operational

Built by In-Space Missions Ltd, based in Hampshire, and designed with Airbus Defence and Space, Prometheus-2 is a collaboration between MoD and international partners, including the US National Reconnaissance Office (NRO).

The mission will come 50 years after a British-made rocket, Black Arrow, last reached space following its lift-off from Australia.

The Soviet Union was the first nation to carry out a successful space launch, with Sputnik 1 in October 1957, before the United States, Japan, France, China, India, Israel and Iran all followed.

North Korea achieved the feat in 2012, along with South Korea earlier this year, so Britain would be the 11th nation to carry out a space launch on its own soil.

Spaceport Cornwall will be the first such hub in the UK to enter service when the repurposed Newquay Airport hosts the space plane lift-off at night, after all the commercial flights have ended.

Science Minister Nusrat Ghani said: ‘As we move ever closer to the first satellite launch from UK soil, it’s excellent to see the progress being made by Virgin Orbit, Spaceport Cornwall and those across government in delivering this historic mission, the first of its kind in Europe.

‘With 47,000 jobs across the UK, our growing space industry is a vital part of the economy and has an important role to play in catalysing investment, generating growth and prosperity.

‘I’m looking forward to working with this innovative sector and delivering on our National Space Strategy.’

The Cornwall horizontal launch site is one of three spaceports in the UK that aim to start satellite launches in 2022, but is expected to beat its two Scottish rivals to seal the title as the host location of the first satellite launch from British soil.

Getting the infrastructure and regulations in place to allow for liftoff from Newquay has taken considerable time, but while the airport and its 1.6 mile-long (2.7km) runway look the same, a new building will allow Virgin Orbit to load satellites into its rocket and then attach it to the wing of its plane.

An on-site mission control will also be used to carry out the launch.

Dan Hart, CEO of Virgin Orbit, said: ‘What an incredible honour it is for us to be part of something as monumental as bringing Britain into the business of launch.

‘Working with our partners across the UK government, we’re starting up a new capability that will serve the people, the economy, and the security of the UK.’

Melissa Thorpe, head of Spaceport Cornwall, added: ‘It’s time to Start Us Up! 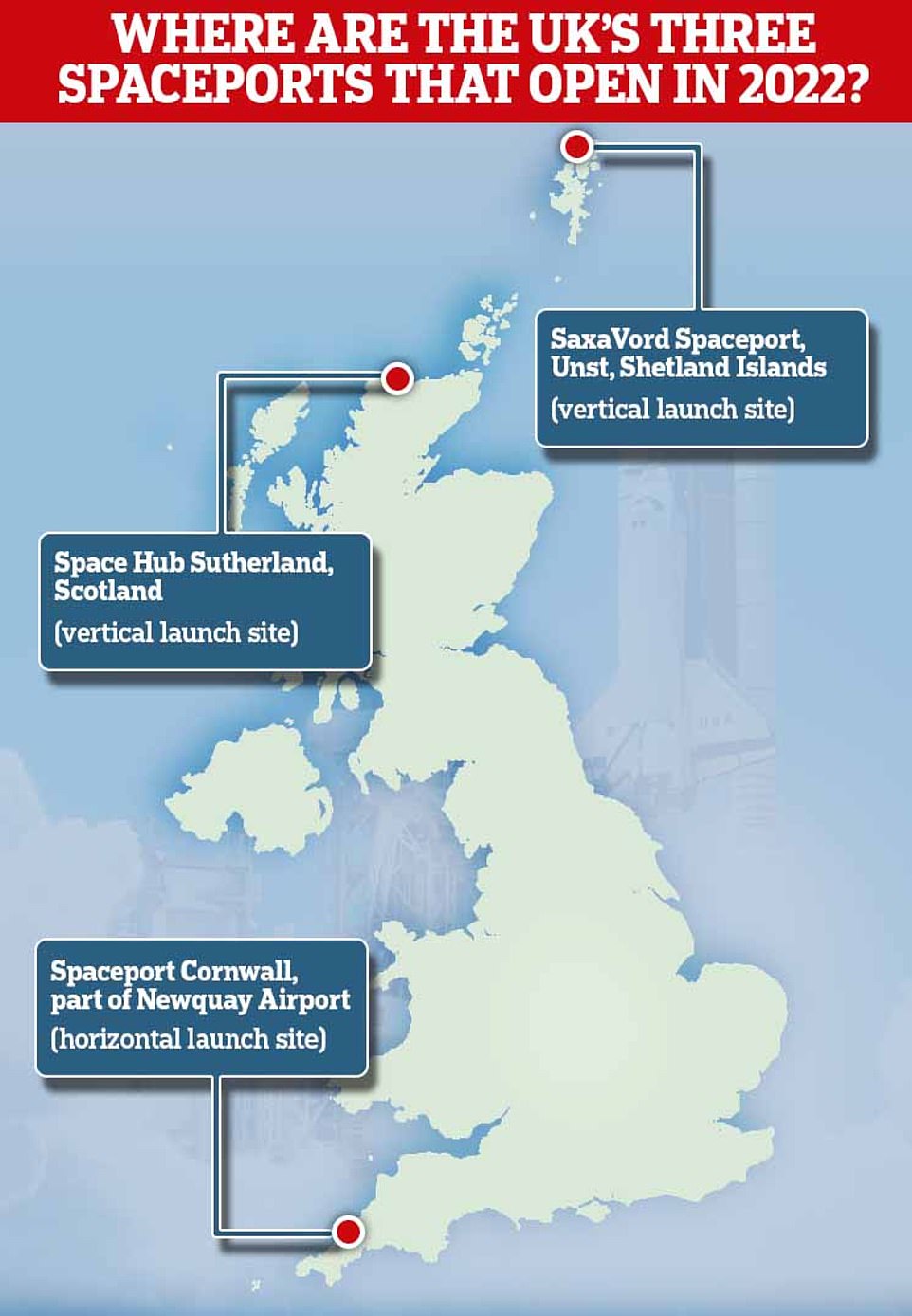 There are three UK spaceports aiming to start operations this year. The one in Cornwall is a horizontal launch site, meaning it uses a carrier aircraft, such as a Boeing 747, for launches before deploying rockets when the aircraft is airborne. Meanwhile, Space Hub Sutherland and SaxaVord Spaceport in the Shetland Islands are vertical spaceports, meaning they perform more conventional ground launches with a rocket

‘This is a huge moment for us all in Cornwall as the journey to UK space launch has officially begun.

‘The mission name and patch reflect and embrace the incredible partnerships between our two countries and teams.’

The first launch from Spaceport Cornwall is just the beginning, with vertical launch spaceports in Scotland expected to come online in 2023.

In June last year, Mr Hart told MailOnline that Spaceport Cornwall could be used to send probes to Mars, Venus and the moon within the next three or four years .

‘Lunar missions and smaller craft bound for Venus and Mars could be launched [from Spaceport Cornwall] within the next three or four years,’ he said.

‘We’re not going to launch a Perseverance rover (currently being used by NASA to search for signs of ancient life on Mars ), for example, but smaller interplanetary probes that explore or carry out landing missions are a possibility.’

However, despite there being talk the Cornish site could one day launch fee-paying space tourists on suborbital pleasure flights, the Virgin Orbit chief said human spaceflight was ‘not currently part of the company’s plans’ for the facility.

HOW VIRGIN ORBIT GETS SATELLITES INTO SPACE

TAKE OFF Cosmic Girl, an adapted Boeing 747, takes off from an air and space port, initially in California.

ROCKET DEPLOYMENT  At cruising altitude around 35,000 feet, the chief pilot hits the Big Red Button that releases the rocket from the pylon.

FIRST STAGE BURN After a 4-second freefall, the first stage engine, NewtonThree, bursts to life, accelerating the rocket to more than 8,000 miles per hour. Once its fuel is spent, the first stage detaches.

FAIRING SEPARATION With LauncherOne now between 310 to 745 miles above the Earth’s surface, the fairing pops open, exposing the payload as it nears its destination.

RETURN TO EARTH Atmospheric drag will eventually pull the second stage back down to Earth, where it burns up in the atmosphere, minimising environmental footprint.