‘We’ll be back in orbit soon’: Virgin Orbit teases we won’t have to wait long for another mission from Cornwall – one day after historic rocket launch ended in failure

Virgin Orbit has claimed it will ‘be back in orbit soon’, just one day after its historic rocket launch from Spaceport Cornwall ended in failure.

Sir Richard Branson’s space firm tweeted optimistically that its team ‘are committed to correcting [their] systems’ and ‘eager to launch again’.

On Monday night, a modified Boeing 747 jet, named ‘Cosmic Girl’, took off from Newquay carrying the 70-foot-long (21 m) LauncherOne rocket under its wing.

While it successfully thrust LauncherOne into space, a technical ‘anomaly’ meant the rocket – which was carrying nine satellites ready for deployment – was never able to reach its target altitude. 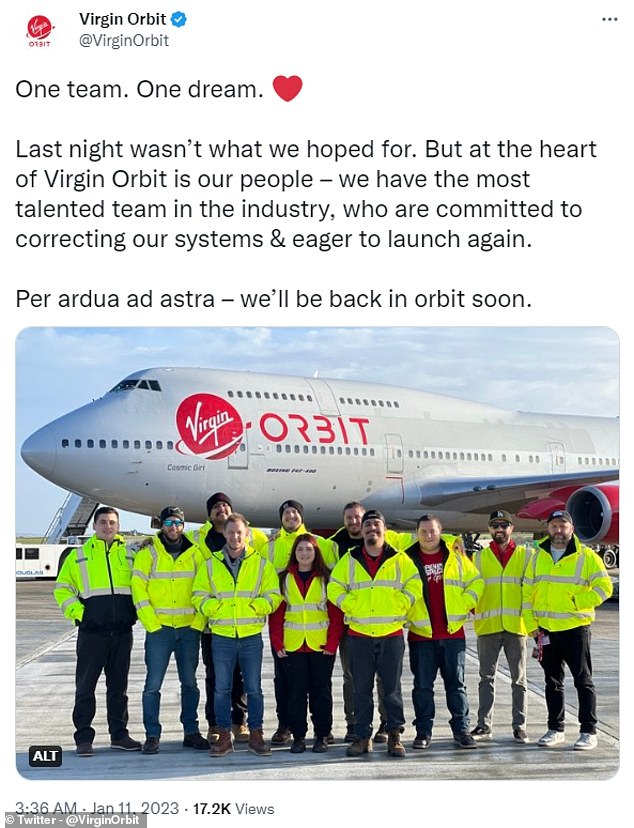 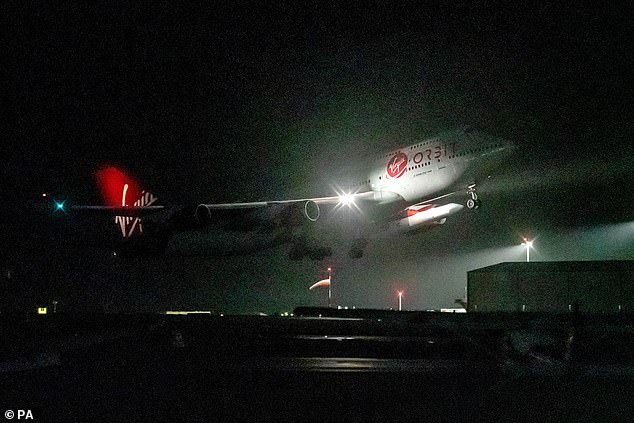 It was supposed to mark the dawn of a new space era for Britain but instead ended in devastating failure. Virgin Orbit’s 70ft rocket was successfully launched from the wing of a modified 747 jumbo jet, only to suffer an ‘anomaly’ as it accelerated to space at 11,000mph

Cash-strapped Virgin Orbit is now fighting for its survival as it hurriedly probes what went wrong and why the first ever satellite mission launched from UK soil ended in failure.

Shares in the firm plummeted by as much as 30 per cent as the drama unfolded in front of the eyes of the world.

This loss of more than $200 million (£164 million) comes just months after Virgin Orbit raised ‘substantial doubt’ about its future amid dwindling cash supplies.

Branson’s Virgin Group was forced to inject $25 million (£20 million) into Virgin Orbit at the start of November, just days before the company reported a net loss of $139.5 million (£117 million) for the first nine months of 2022.

British taxpayers’ money was among the £20 million that has so far been thrown at the Spaceport Cornwall project.

As it never entered orbit, LauncherOne could not release its payload of satellites, and was ultimately lost.

While it has yet to be confirmed, the £6.6 million ($10 million) rocket is thought to have either burned up in the Earth’s atmosphere or broken apart over the north Atlantic.

A Virgin Orbit spokesperson told MailOnline: ‘The telemetry indicates that LauncherOne stayed on its course throughout its flight, within the safety zone over water west of Africa.

‘We are continuing to process the data over the coming days and weeks, however we understand that the upper stage would have experienced largely destructive heat loads as it re-entered the atmosphere.’

Matt Archer, the agency’s launch programme director, told reporters at Spaceport Cornwall: ‘In effect the rocket has not reached the required altitude to maintain its orbit or deploy the satellites and therefore the mission was unsuccessful.

‘Over the coming days, there will be an investigation involving the Government and various bodies, including Virgin Orbit, to make sure we understand what caused that technical failure and again we’ll work out what to do next following that.’

Disappointment was rife among the hundreds of spectators who travelled to watch the take-off in person, and 75,000 people who watched its livestream.

Melissa Thorpe, head of Spaceport Cornwall, said she was ‘feeling awful’ and that ‘there were tears’ when her team got together.

In a separate statement, she added: ‘Today we inspired millions, and we will continue to look to inspire millions more. Not just with our ambition but also with our fortitude.

‘Yes, space is hard, but we are only just getting started.’

A probe has begun to understand exactly what went wrong during the devastating mission, named ‘Start Me Up’ after the 1981 hit from The Rolling Stones.

Dan Hart, Virgin Orbit CEO, said: ‘We will work tirelessly to understand the nature of the failure, make corrective actions, and return to orbit as soon as we have completed a full investigation and mission assurance process.’ 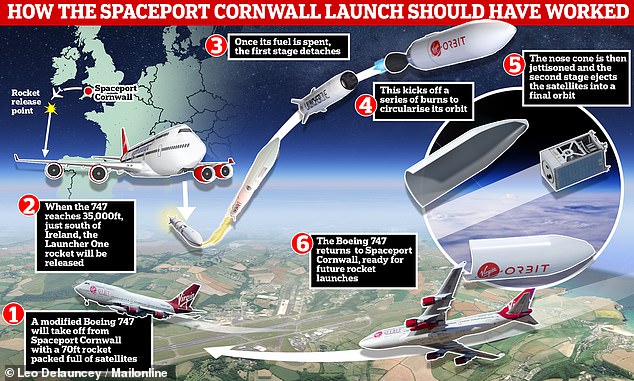 All appeared to go to plan for Britain’s first orbital launch up until the moment LauncherOne’s second stage engine was fired. This was due to happen when the rocket was between 310 to 745 miles above the Earth, and the engine would kick off a series of burns to get it into orbit 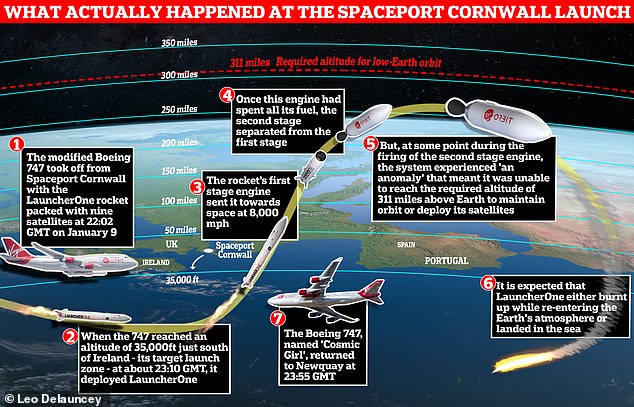 However, at some point during the firing of the rocket’s second stage engine, the system ‘experienced an anomaly’. The second stage was unable to reach the required altitude to maintain low-Earth orbit or deploy its satellites 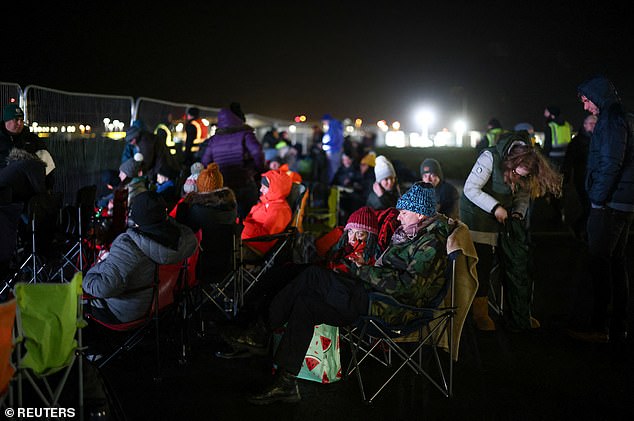 Spectators (pictured) whooped and danced to Start Me Up by the Rolling Stones as the jet took off, with people climbing onto each other shoulders to witness a moment which had promised to deliver the birth of a home-grown space launch industry

A further 75,000 people watched online via a live stream on Virgin Orbit’s YouTube channel. Pictured: The moment the rocket ignited

2007 – Three people were killed and several others seriously injured when a tank of nitrous oxide detonated and destroyed a Virgin Galactic test stand.

2011 – Virgin Galactic’s ‘SpaceShipTwo’ malfunctioned during re-entry, although its pilots managed to correct the problem.

2020 –  Virgin Orbit’s first test launch of the LauncherOne rocket over California’s Mojave Desert went wrong a few seconds after ignition. It was blamed on a premature shutdown of the first stage engine, and meant the rocket did not reach orbit.

Business Secretary Grant Shapps added that the Government would ‘work closely’ with Virgin Orbit to investigate the failure ‘the coming days and weeks’.

The mission is estimated to have cost more than £164 million ($200 million), and caused shares in Virgin Orbit to plummet by as much as 30 per cent.

The nine satellites that were lost were insured so their manufacturers and operators will be compensated.

Once the cause of the failure has been established, the site is targeting two unmanned commercial space flights in a year’s time, but it has a licence for up to 12.

In a statement to MPs, Mr Shapps said: ‘The project has succeeded in creating a horizontal launch capability at Spaceport Cornwall and we remain committed to becoming the leading provider of commercial small satellite launch in Europe by 2030.’

The Newquay launch site is one of three spaceports in the UK that aim to start satellite launches this year, with two more planned in Scotland.

Virgin Orbit, which has performed three commercial flights in the US, wants Spaceport Cornwall to be its first base outside America.

British taxpayers’ money was among the £20 million that has so far been thrown at the site, from a consortium including the local council, Virgin and the UK Space Agency.

Its development is expected to create around 150 jobs and allow the UK to compete in the global market for deploying small satellites into Earth orbit – an industry forecast to be worth £3.9 billion by 2030 which Branson is hoping to tap into.

However, the failure of ‘Start Me Up’ has somewhat poured cold water over such aspirations. 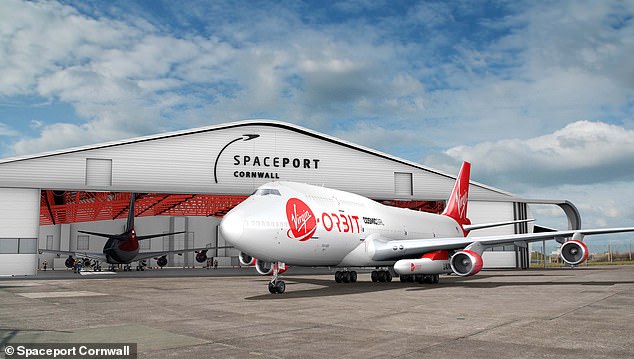 British taxpayers’ money was among the £20 million that has so far been thrown at Spaceport Cornwall, from a consortium including the local council, Virgin and the UK Space Agency 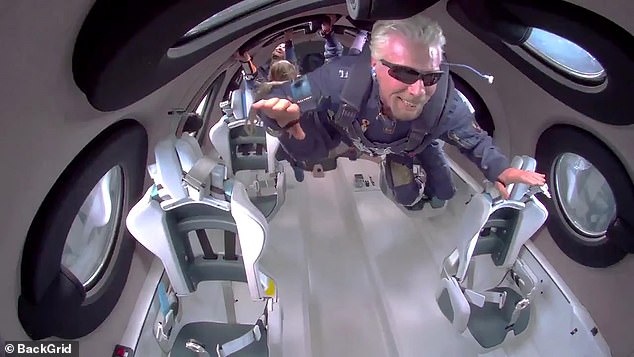 Mr Hart previously told MailOnline that human spaceflight was ‘not currently part of the company’s plans’ for the Spaceport Cornwall.

But he said it could be used to send probes to Mars, Venus and the moon within the next three or four years.

‘Lunar missions and smaller craft bound for Venus and Mars could be launched [from Spaceport Cornwall] within the next three or four years,’ he added.

Sir Richard Branson also has Virgin Galactic, which is based in the US and focused on space tourism.

In 2021, he flew to the edge of space and back in his Virgin Galactic rocket plane — beating Amazon founder Jeff Bezos and Space X’s Elon Musk in the billionaire space race.

What other space launches will take place in 2023? MailOnline looks at the exciting missions blasting off this year.

Why haven’t aliens contacted Earth yet? Scientists say it’s because there’s no sign of intelligence here!

Stargazers will have a once-in-a-generation chance to see a new comet at the end of January.

HOW VIRGIN ORBIT GETS SATELLITES INTO SPACE

TAKE OFF Cosmic Girl, an adapted Boeing 747, takes off from an air and space port, initially in California.

ROCKET DEPLOYMENT  At cruising altitude around 35,000 feet, the chief pilot hits the Big Red Button that releases the rocket from the pylon.

FIRST STAGE BURN After a 4-second freefall, the first stage engine, NewtonThree, bursts to life, accelerating the rocket to more than 8,000 miles per hour. Once its fuel is spent, the first stage detaches.

FAIRING SEPARATION With LauncherOne now between 310 to 745 miles above the Earth’s surface, the fairing pops open, exposing the payload as it nears its destination.

RETURN TO EARTH Atmospheric drag will eventually pull the second stage back down to Earth, where it burns up in the atmosphere, minimising environmental footprint.