Wasps watch over nearby nests in 'surprising act of selflessness'

Wasps BABYSIT for their neighbours! Insects watch over nearby nests in ‘surprising act of selflessness’

In what experts have called a ‘surprising act of selflessness’, some wasp colonies lend their spare workers to babysit in neighbouring nests, a study has found.

Researchers from the UK studied some 20,000 baby Neotropical paper wasps and their carers from 91 different colonies in Panama, including near the canal.

Paper wasps are so-named for the grey and brown paper-like materials they produce from a mixture of chewed up plant fibres and saliva and use to construct their nests.

The team found that as colonies get larger in number, the usefulness of individual worker wasps becomes smaller as they have a surplus of labour.

This frees up some of the workers to help their more distant relatives living in neighbouring, smaller colonies that are short on workers.

Such acts are only selfless and altruistic, however, because they cost the worker wasps time and energy. They also have fringe benefits.

When wasps help their distant relatives, it increases the chance that the DNA they share will survive along with the assisted colony. 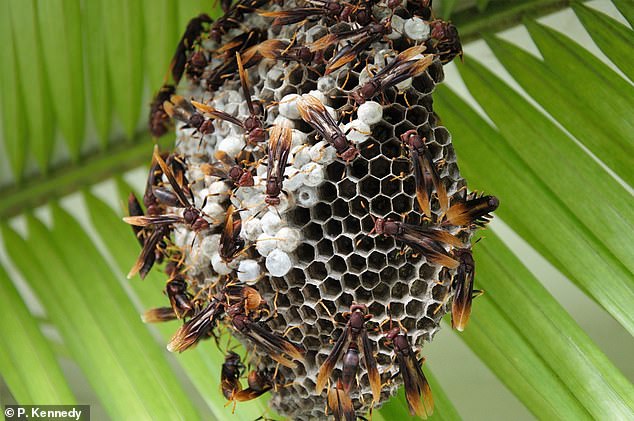 In what experts have called a ‘surprising act of selflessness’, some wasp colonies lend their spare workers to babysit in neighbouring nests, a study has found. Pictured, a paper wasp nest

‘These wasps can act like rich family members lending a hand to their second cousins,’ said paper author and biologist Patrick Kennedy of the University of Bristol.

‘If there’s not much more you can do to help your immediate family, you can turn your attention to the extended family,’ he added.

‘By helping more distant relatives who are more in need — those living next door with fewer carers — workers can pass on more copies of their genes overall,’ explained paper co-author and behavioural ecologist Andy Radford, also of Bristol.

‘We believe that similar principles of diminishing returns might explain seemingly paradoxical acts of altruism in many other social animals.’

Dr Kennedy added: ‘The fact that these paper wasps in Central and South America help at other colonies is really bizarre when you consider that most wasps, ants and bees are extremely hostile to outsiders.

‘To solve this puzzling behaviour, we combined mathematical modelling with our detailed field observations. We ended up being stung a lot. But it was worth it, because our results show that worker wasps can become redundant at home.

‘A wasp on a colony with few larvae but lots of other workers becomes almost useless — the best thing to do is to babysit the larvae of other relatives.’ 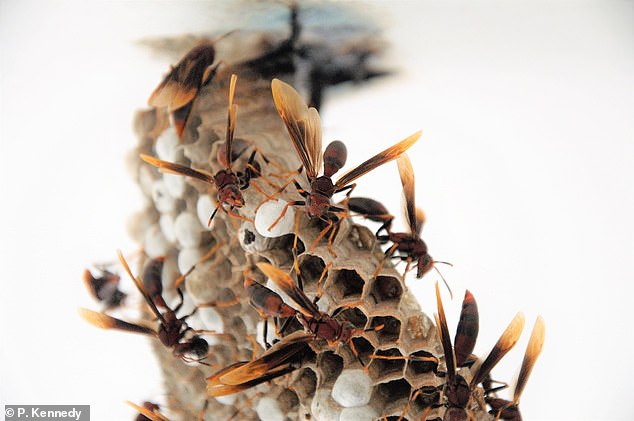 Researchers from the UK studied some 20,000 baby Neotropical paper wasps (pictured) and their carers from 91 different colonies in Panama, including near the canal

How apparently forms of ‘altruism’ originate in nature has been an open question since the age of the naturalist Charles Darwin — as, on first glance, helping others would not seem to provide a way for living things to pass on their genes.

However, explained Professor Radford, ‘in 1964, the legendary biologist W. D. Hamilton figured out the cardinal rule of animal altruism.’

‘Lavish help on your family because they share many of your genes. Copies of your genes will triumph in the population.’

Professor Hamilton had also studied tropical paper wasps — but was confused, when examining Polistes wasps in Brazil, to see workers leave their close family in their own nests to help those of neighbouring colonies, who were more distantly related.

The new findings, however, explain how paper wasps can afford to help their more distant relatives in certain circumstances — and gain an evolutionary benefit. 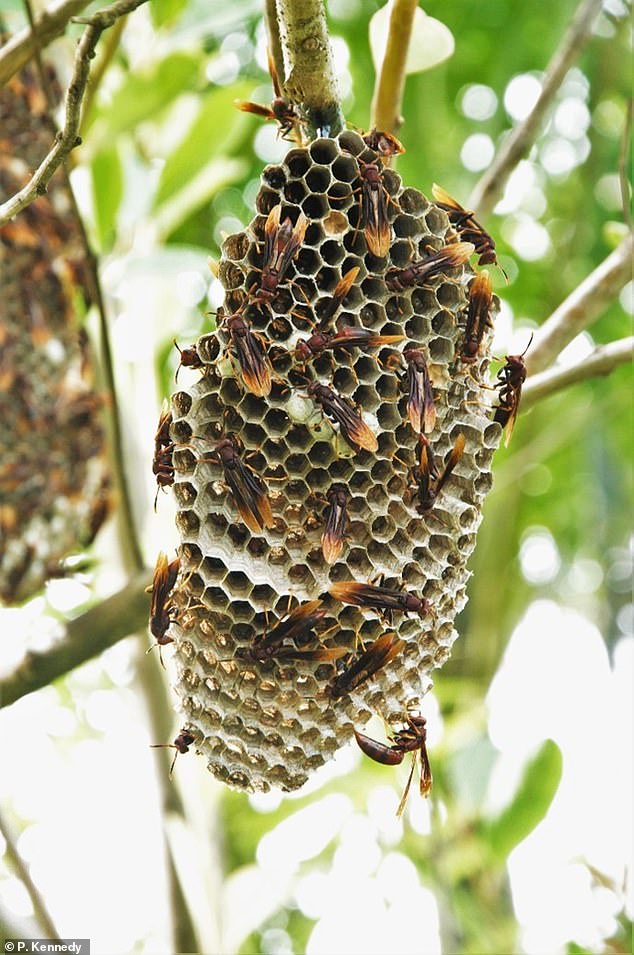 The team found that as colonies get larger in number, the usefulness of individual worker wasps becomes smaller as they have a surplus of labour. This frees up some of the workers to help their more distant relatives living in nearby, smaller colonies that are short on workers.

This study built on previous work by paper co-author and behavioural ecologist Seirian Sumner of University College London, which revealed that more than half of the workers in a Panamanian wasp population were helping on multiple nests.

‘Wasps offer amazing windows into the evolution of selflessness,’ she said.

‘There is so much going on in a wasp nest: power struggles, self-sacrifice, groups battling against the odds to survive.’

‘If we want to understand how societies evolve, we should look more deeply at wasps,’ Professor Sumner concluded.

The full findings of the study were published in the journal Nature Ecology & Evolution.

WHY DO WASPS STING AND WHY DO THEY HURT SO MUCH?

Wasp stings are common, especially during the warmer months when people are outside for longer periods of time.

They tend to occur in the later summer months when the social structure of the colony is breaking down.

At this time, the group mindset is changing from raising worker wasps to raising fertile queens, which will hibernate over the winter to start new colonies the following spring.

Once the wasp has laid eggs, she stops producing a specific hormone which keeps the colony organised.

This leads to the wasps becoming confused and disorientated and they tend to stray towards sweet smelling human foods, such as ice cream and jam.

This puts them in the firing line of scared and frenzied people which aggravate the animals with wafting hands and swatting magazines.

When the critters become angry and scared they are prone to stinging.

Wasp stings can be uncomfortable, but most people recover quickly and without complications.

It is designed as a self-defence mechanism but, unlike bees, wasps can sting multiple times.

The stingers remain in tact and are often primed with venom which enters the bloodstream.

Peptides and enzymes in the venom break down cell membranes, spilling cellular contents into the blood stream

This can happen to nerve cells and these are connected to the central nervous system.

This breach causes the injured cell to send signals back to the brain. We experience these signals in the form of pain.

There are chemicals in the wasp sting which slows the flow of blood, which elongates the period of pain.

nearby, nests, over, Wasps, Watch
You may also like: