Watch Europe dry up from SPACE in new satellite video

Watch Europe dry up from SPACE: New satellite video reveals the progression of the continent’s worst drought in 500 years

Europe has experienced what has been described as the worst drought in 500 years, with two-thirds of the continent put under some sort of warning.

Now, satellite video has revealed the extent of this dry weather as seen from space.

A sequence of images in the footage compares what Europe looked like in July and August this year, compared to 2021, and reveals how the continent has turned from a verdant green to an arid brown because of the lack of rain.

The video was tweeted by the European Union’s Copernicus Program, which operates the constellation of Earth-observing Sentinel satellites.

WHAT IS THE COPERNICUS PROGRAMME?

The multi-billion Copernicus programme aims to help predict weather phenomena such as El Nino and track the progress of global warming.

There are three lots of twin satellites currently orbiting the Earth, named Copernicus Sentinel-1, 2 and 3.

The Copernicus project is described by the European Space Agency (ESA) as the most ambitious Earth observation programme to date.

The launch of the Copernicus project became especially urgent after Europe lost contact with its Earth observation satellite Envisat in 2012 after 10 years.

‘In 2022, #drought has affected the whole of Europe,’ Copernicus said in the tweet.

The images, which were captured by the Sentinel 2 satellite, show that from the south and east of England, to northern France and even Eastern Europe, vegetation has suffered a huge amount of damage.

It follows the release last month of a report by the European Drought Observatory (EDO), overseen by the European Commission, which said that 47 per cent of Europe was under warning conditions.

It added that 17 per cent of Europe is in a state of alert, in which vegetation is affected, and that the continent was facing its worst drought since the Middle Ages.

The European summer this year is thought to be the driest since a mega-drought that hit the continent in 1540.

‘The severe drought affecting many regions of Europe since the beginning of the year has been further expanding and worsening as of early August,’ the report said, adding that the western Europe-Mediterranean region was likely to experience warmer and drier than normal conditions until November.

Much of Europe has faced weeks of extremely hot temperatures this summer, which worsened the drought, caused wildfires, set off health warnings, and prompted calls for more action to tackle climate change.

Summer crops have suffered, with 2022 yields for grain maize set to be 16 per cent below the average of the previous five years and soybean and sunflowers yields set to fall by 15 per cent and 12 per cent, respectively.

Hydropower generation has been hit, with further impact on other power producers due to a shortage of water to feed cooling systems.

Low water levels have hampered inland shipping, such as along the Rhine, with reduced shipping loads affecting coal and oil transport.

Such has been the extent of devastating wildfires across Europe this summer that they have led to the highest emissions since 2007, a new report also claims.

The emissions recorded for summer 2022 were largely driven by the devastating wildfires across southwestern France and the Iberian Peninsula, with France and Spain experiencing their highest wildfire emissions in the last 20 years.

The combination of August’s heatwave with prolonged dry conditions across western Europe resulted in increased wildfire activity, intensity and persistence.

Scientists from the Copernicus Atmosphere Monitoring Service have been monitoring the daily intensity and emissions, and resulting air quality impacts, from these fires throughout the summer along with other wildfires around the world.

Mark Parrington, senior scientist and wildfire expert from the Copernicus Atmosphere Monitoring Service, said: ‘The scale and persistence of the fires in the southwest of Europe leading to the highest emissions for Europe in 15 years was extremely concerning throughout the summer.

‘The majority of the fires occurred in places where the changing climate has increased flammability of the vegetation such as in southwestern Europe, and as we have seen in other regions in other years.’ 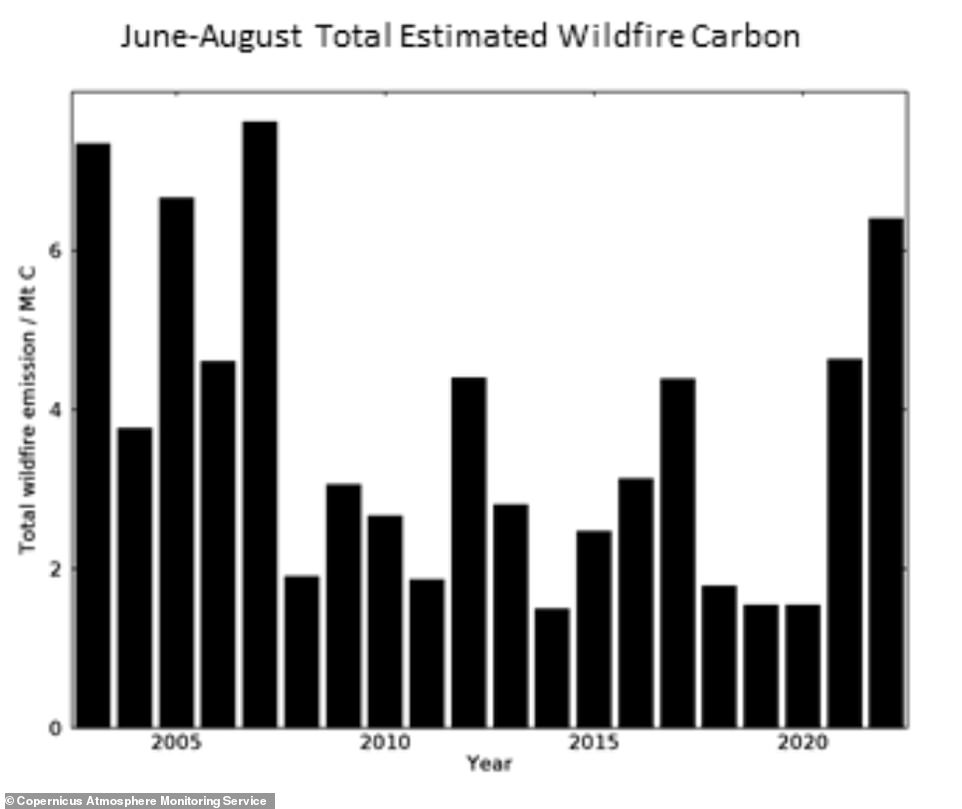 Such has been the extent of devastating wildfires across Europe this summer that they have led to the highest emissions since 2007, a new report also claims. This graph shows the total estimated wildfire carbon emissions from 2003 to 2022

‘We are on a fast track to climate disaster’: Damning UN report warns greenhouse gas emissions must peak by 2025 at the LATEST to limit global warming to 2.7°F

To hit the ambitious target of limiting global warming to 2.7°F (1.5°C), global greenhouse gas emissions need to peak before 2025 at the latest, an UN report has warned.

The UN Intergovernmental Panel on Climate Change (IPCC) report claims that there is a ‘brief and rapidly closing window of opportunity’ to limit warming by 2100.

Carbon dioxide (CO2) emissions must be slashed by a whopping 48 per cent by 2030 and hit net zero by 2050 if we’re to hit the target, according to the report.

Meanwhile, methane emissions must be reduced by a third by 2030, and almost halved by 2050.

As it stands, we are currently on track for global warming of 5.7°F (3.2°C) by 2100, with devastating consequences for ‘all living things’, according to the IPCC.

‘We are at a crossroads. The decisions we make now can secure a liveable future. We have the tools and know-how required to limit warming,’ said IPCC Chair Hoesung Lee.

UN secretary-general Antonio Guterres described the report as a ‘file of shame’, and warned we are on a ‘fast track to climate disaster’.