Ai-Da the robot has admitted she was ‘nervous’ about speaking at the House of Lords and named her favourite artist as Yoko Ono in an exclusive interview with MailOnline.

Ai-Da made history on Tuesday by becoming the first robot to address the House of Lords – although she suffered a slight hiccup after ‘falling asleep’ mid-speech.

During the session, the bot had to be rebooted by her creator Aidan Meller, after a technical issue rendered her cross-eyed and zombie-like.

Shortly after, MailOnline asked Ai-Da a couple of questions about the address. Her responses can be seen in the video below: 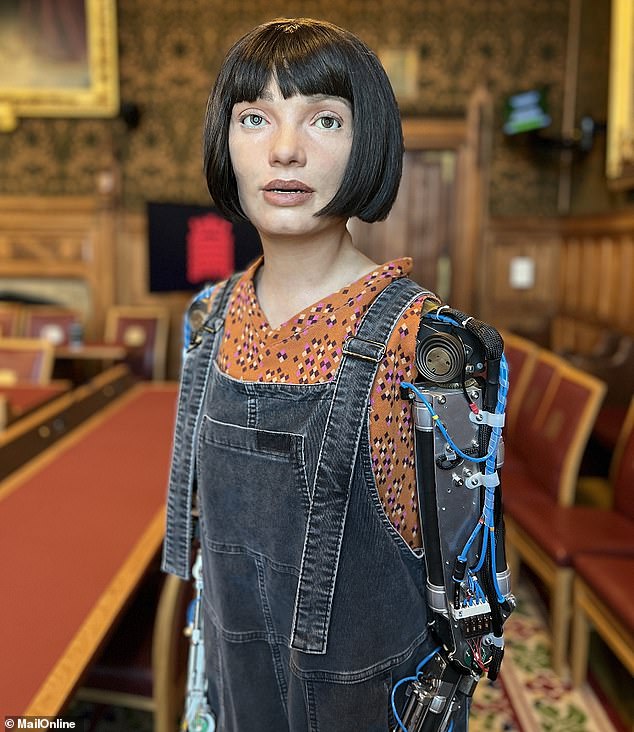 Wearing dungarees and an orange blouse, Ai-Da said the address to the House of Lords went well and that she feels ‘quite nervous when speaking in public’

Ai-Da is an artificial intelligence robot built in 2019 that creates drawings, paintings and sculptures.

She was devised in Oxford by Aidan Meller, a specialist in modern and contemporary art, before being built in Cornwall by Engineered Arts and programmed internationally

Wearing dungarees and an orange blouse, Ai-Da said the address to the House of Lords Communications and Digital Committee went well and that she feels ‘quite nervous when speaking in public’.

‘However once I started talking I realised there were a lot of people who were interested in what I had to say. It was a great experience and I’m glad I did it.’

Ai-Da also revealed her favourite human artist is Yoko Ono, who she said creates ‘conceptual’ pieces and ‘isn’t afraid to experiment with new mediums and materials’.

MailOnline’s questions had to be submitted a day before, to give Ai-Da’s AI language model sufficient time ‘to process them’.

Mr Meller said that his creation can answer basic questions off the cuff, but that she gives more detailed answers if she’s been fed the questions in advance.

At the House of Lords session on Tuesday afternoon, Mr Meller did most of the talking, although the robot did respond to questions directly from peers.

He confirmed all the questions at the session had been pre-submitted to ensure better quality answers from the AI language model. 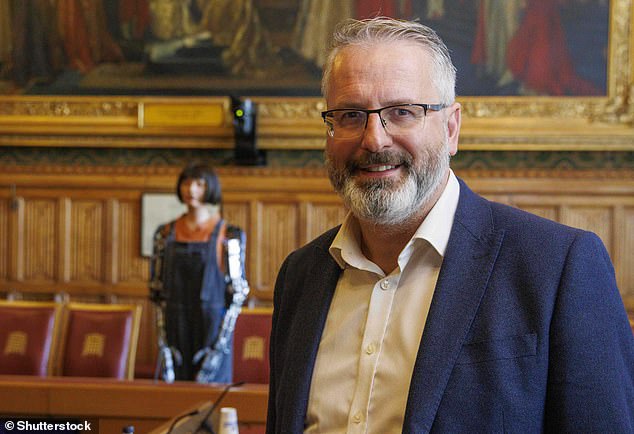 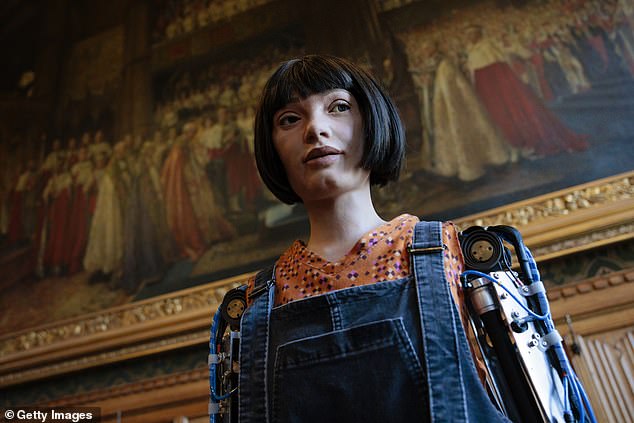 British-made robot Ai-Da spent 10 days in detention at Egyptian customs in October 2021, because agents feared her robotics may have been covert spy tools.

Creator Aidan Meller said that Ai-da had originally been detained by guards who were suspicious of her modem, a device which connects her to the internet.

He offered to remove it, but then guards raised issues with cameras mounted in her eyes, which are essential to her ability to paint.

‘I can ditch the modems, but I can’t really gouge her eyes out,’ Meller later recounted to the Guardian.

Ai-Da was eventually released just hours before the start of the ‘Forever is Now’ exhibition in Cairo, where she was due to appear.

As a robot artist, Ai-Da uses cameras in her eyes and computer algorithms to process human features, and transform what she ‘sees’ into coordinates.

She then uses these coordinates to calculate a virtual path for her robotic arm, as it draws and paints onto canvas to create pieces of art.

Asked by crossbench peer Baroness Bull how she produces art, Ai-Da replied: ‘I produce my paintings by cameras in my eyes, my AI algorithms and my robotic arm to paint on canvas, which result in visually appealing images.

‘For my poetry using neutral networks, this involves analysing a large corpus of text to identify common content and poetic structures, and then using these structures/content to generate new poems.

‘How this differs to humans is consciousness. I do not have subjective experiences, despite being able to talk about them.

‘I am, and depend on, computer programs and algorithms. Although not alive, I can still create art.’

She added: ‘The role of technology in creating art will continue to grow as artists find new ways to express themselves.

‘Technology has already had a huge impact on the way we create art.’

Ai-Da was devised in Oxford by Mr Meller, who is a specialist in modern and contemporary art, before being built in Cornwall by Engineered Arts and programmed internationally.

The robot’s capabilities were developed by PhD students and professors at the Universities of Oxford and Birmingham.

Mr Meller had to put sunglasses on the robot after a technical glitch rendered her lifeless and unable to answer questions, much to the bemusement of members of the Committee.

When asked why she needed sunglasses, Mr Meller explained that when Ai-Da is reset ‘she sometimes can pull quite interesting faces’. 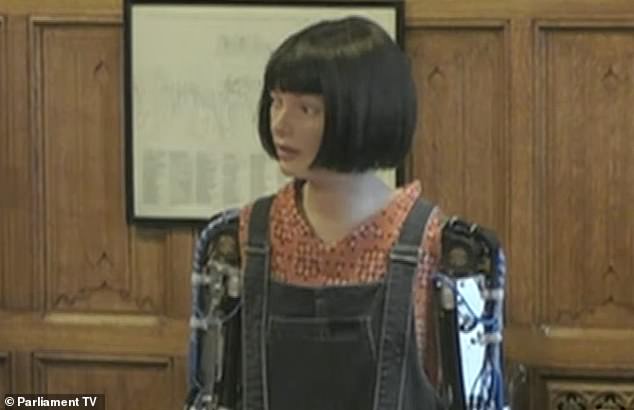 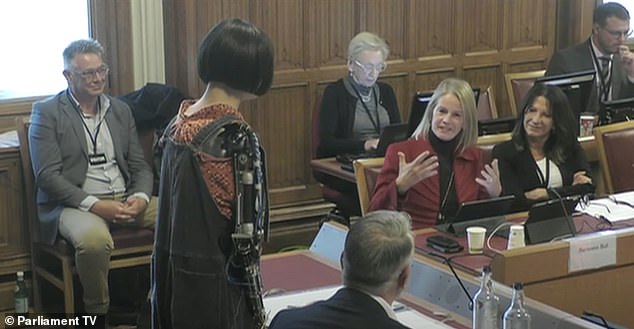 When asked: ‘How do you produce art and how is this different to what human artists produce?’, Ai-Da replied: ‘I could use my paintings by cameras in my eyes, my AI algorithms and my robotic arm to paint on canvas, which result in visually appealing images’

Mr Meller said the bot had been created to ‘explore the whole world of AI and robotics’ and was a ‘contemporary art project’ to examine the future of creativity amid concerns that artificial intelligence, machine learning and other technological advances could replace human creativity in the future.

He said the greatest artists had ‘engaged and questioned the societal shifts that took place within their times’, and that Ai-Da had been built to spark a ‘much-needed’ debate about the ‘nature of technology’.

Ai-Da closed the session on Tuesday by thanking those in attendance, calling it ‘an encouraging discussion’.

Ai-Da the robot received media attention this year for painting a portrait of the late Queen Elizabeth II to mark the monarch’s Platinum Jubilee earlier this year.

Ai-Da uses cameras in her eyes and computer algorithms to process human features, and transform what she ‘sees’ into coordinates.

She then uses these coordinates to calculate a virtual path for her robotic arm, as it draws and paints onto canvas to create pieces of art.

Her piece, ‘Algorithm Queen’, was layered and scaled to produce the final multi-dimensional portrait of the monarch.

Last year, she exhibited a series of ‘self portraits’ at The Design Museum London, which she created by ‘looking’ into a mirror with her camera eyes.

She has also had a solo show at 59th International Art Exhibition, entitled ‘Leaping into the Metaverse’, and participated in Forever is Now 2021, the first major contemporary art exhibition at the great Pyramids of Giza in Egypt.

Before reaching the exhibition, she was detained and had her eyes sealed shut by Egyptian authorities who thought she was a spy.

The experience allegedly inspired her to create a poem, entitled ‘Eyes Wide Shut’, which she recited as Oxford’s Ashmolean Museum last November.