Charles and Claire Davies, whose house overlooks Solva harbour, noticed a bizarre movement in the water at a time when the tide should have still been low.

Scientists have linked the “extraordinarily powerful” surges spotted by the retired couple to a tsunami-like phenomenon driven by disturbances in air pressure, often linked to extreme weather events.

Mr Davies, 69, told WalesOnline: “The water appeared to be running out of the harbour rather than in.

“We started to see this strange event where the water was surging in and out and in again.”

It was around 8.50am last Saturday when Mr Davies and his wife were struck by the large waves, which he said he had not seen in the 13 years living in the area.

Adding more mystery to the event, there appeared to be no reports of similar activity that morning anywhere other than this small corner of the Pembrokeshire coastline.

However, after some research, one of Mr Davies’ family members came across an Irish Times article about a tidal event which happened at 2pm on the same day and left west Cork residents stunned. 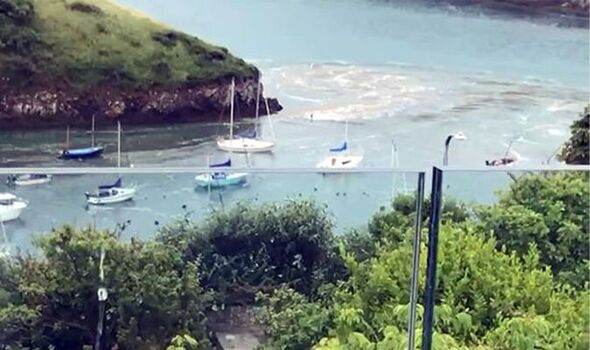 One charter boat operator at Courtmacsherry harbour told the outlet he could see the water was “going the wrong way, it should have been coming in”.

He said: “The water was rushing out like a river. I’d never seen anything like it before. The first thing you think is ‘tsunami’, and to be honest, if it was going any faster I think we all would have been heading for the hills.”

Mr Davies said: “If there were people in the water swimming or in kayaks, it would have been quite a serious event to them, because an Olympic swimmer swims at five or six miles an hour and this water was moving considerably faster than that, I would say.

“They wouldn’t have been able to keep up with it.”

Experts say the activity may have been caused by a meteotsunami: large waves driven by disturbances in air pressure, often linked to extreme weather events.

Get the latest three-day weather forecast where you live. Find out by adding your postcode or visit InYourArea

According to oceanographer Dr Gerard McCarthy, Courtmacsherry, a seaside village in County Cork, is regularly impacted by seiching, an oscillation of tidal currents he described as “basically, water moving backwards and forwards”.

Dr McCarthy told the Irish Examiner: “My best guess is that this regular seiching coincided with a dramatic and sudden change in atmospheric pressure somewhere out over the Atlantic off the coast of West Cork.

“If you imagine someone dropping a large volume of water straight down on the sea, that’s the kind of effect we are talking about.

“That pressure combined with the regular to and fro of water in those bays could have created a dramatic and unusual effect like the one we saw.”

The oceanagraper, who works at the Irish Climate Research and Analysis UnitS (ICARUS), believes the same atmospheric event was the likely cause of the Solva activity.

He said: “It definitely had an impact, though less severe, further along the Irish coast in Wexford, and there is also evidence of it being felt in Wales and Cornwall – so this was quite a significant event.”

Mr Davies insisted it was a “lovely sunny day” with a “gentle north-easterly wind” in which rough water conditions would not have been expected.

He said: “We expect surges during storm conditions but we’ve never seen one during benign conditions. “

“We saw water coming in at seven knots, going back out again and causing boats to lean quite dramatically.

“It was causing an area of swirling water, a back eddy around the little headland.”

Channel 4 News’ Wales Correspondent Andy Davies, who is cousin to Mr Davies, shared a conversation he had with another meteotsunami expert, Dr Julian Thompson, about the Solva event.

The journalist said on Twitter: “He’s watched the wider footage and thinks a storm surge or a meteotsunami are ‘the two prime candidates’. He thinks the tidal event along the Irish coast is ‘probably’ linked to what happened in Solva.

“Says there are fewer than 10 meteotsunamis on average per year witnessed around the UK – areas most prone: south-west corner of Wales to Isle of Wight and northern part of the North Sea.”

Mr Davies added: “Dr Thompson says it’s not clear whether meteotsunamis are increasing in frequency [as recording of them only dates back 20-25 years] but documenting where they happen is an important public safety measure given the suddenness with which they can emerge.

“Anyway, I found it all very intriguing – Dr Julian Thompson says he’s now referred this to the Met Office to investigate further to establish whether it’s a) a storm surge b) a meteotsunami or c) ‘something else in which case we hold hands up and say: we don’t know!'”