If you use Twitter, it’s likely you’ve spotted a range of new coloured ticks on the platform this week.

Twitter accounts can now feature a gold tick, a blue tick, a grey tick, or no tick at all next to their account name.

But what do these checkmarks actually mean? While the blue tick once indicated that an account belonged to someone noteable, it isn’t quite as straightforward as that any more. 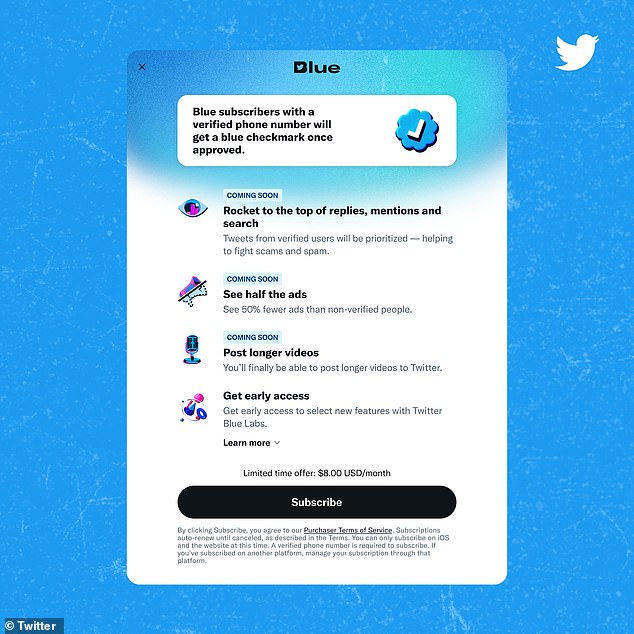 Twitter Blue is a subscription service that gives users a ‘Blue Tick’ of verification for a monthly fee.

Subscribers are offered a range of features not available to regular account holders, including the ability to edit tweets after posting. 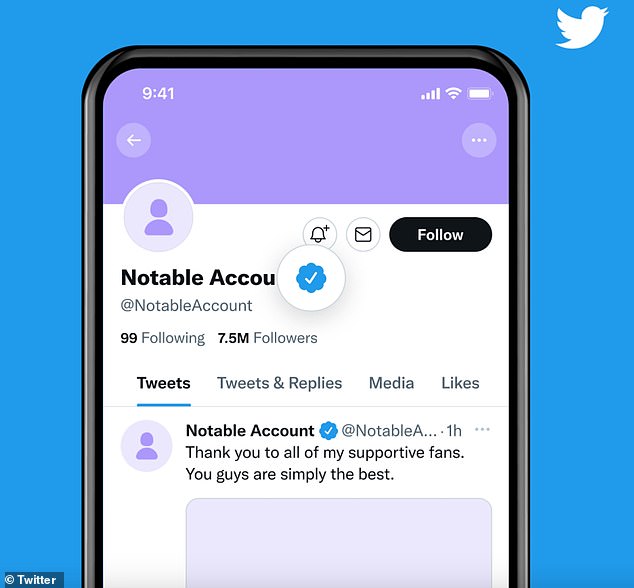 This has long been requested by many users, although there are others who argue that it increases the potential for the spread of disinformation because a tweet could be altered after being widely shared.

Twitter said blue-tick subscribers will also see fewer adverts, have their tweets amplified above others, and be able to post and view longer, better quality videos.

However, not everyone who has a blue tick is paying for the Twitter Blue subscription service.

Before Musk took over, a blue tick was given out by Twitter for free to verify high-profile accounts and prove they were authentic.

Those who had one under the previous regime currently still have them, but now some of these users also have a message that appears if the tick is pressed.

These will eventually be replaced when the new system is rolled out in full.

When this is completed, each Twitter Blue subscriber will receive the blue tick by their account name after their account has been reviewed and connected to a verified phone number.

Subscribing to Twitter Blue is now available in the United States, Canada, Australia, New Zealand and the United Kingdom.

The social network said it planned to roll out Blue to more countries soon.

Why do Apple users have to pay more?

Neither the social network, nor its CEO Elon Musk, have provided an explanation as to why people with Apple devices are being charged more than others.

However, tension was apparent between the two companies last month after Musk claimed Apple ‘threatened to withhold Twitter’ from the App Store.

He has also previously said in tweets that he resents the commission fee Apple charges on in-app purchases, accusing the tech giant of applying a ‘hidden 30% tax’.

This would eat into his profit margins for Twitter Blue subscriptions bought through the iOS app and could be an explanation for the price hike.

What are the Gold ticks for?

In addition to the ‘Blue tick’, Twitter is also replacing the ‘official’ label with a gold checkmark on verified business accounts.

This includes the social network, with the platform’s official account itself having received a shiny new gold tick. 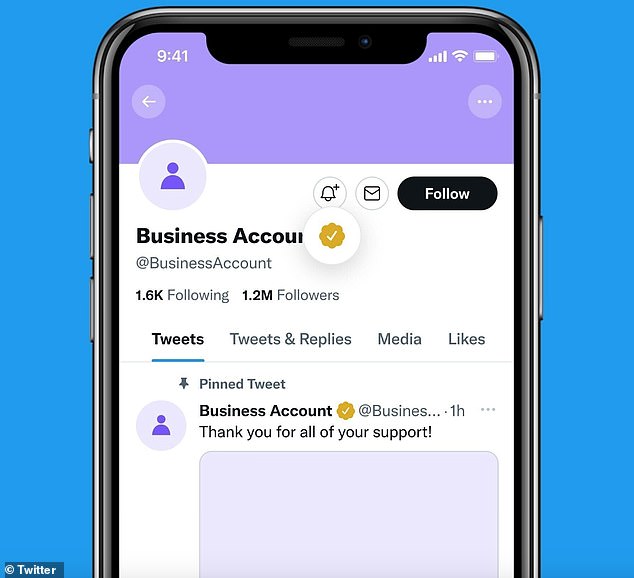 In addition to the ‘Blue tick’, Twitter is also replacing the ‘official’ label with a gold checkmark on verified business accounts 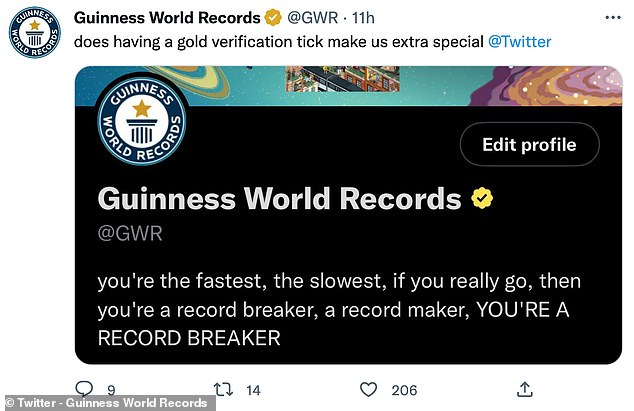 Businesses have been celebrating the changes and the recognition that comes with this badge-of-honour.

Xbox, Marvel Entertainment and Sony are among the first few accounts to have the gold tick on Twitter, while the Guinness World Records Twitter handle tweeted: ‘Does having a gold verification tick make us extra special @Twitter?’

However, there was a slight hiccup in the rollout as Sky News presenter Sophy Ridge was briefly given a gold tick rather than a blue one, although this was later rectified.

There is no information regarding the prices of this new gold tick. 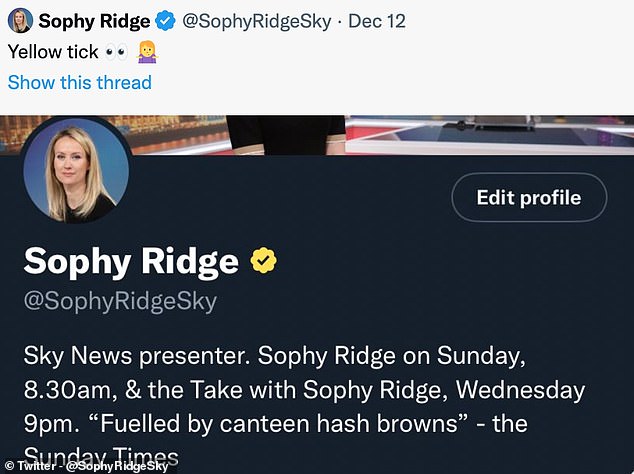 However, there was a slight hiccup in the rollout as Sky News presenter Sophy Ridge was briefly given a gold tick rather than a blue one (pictured), although this was later rectified

And how about the Grey ticks?

In the same way that blue ticks are for people and gold for businesses, the grey tick will be for government accounts.

This hasn’t yet been introduced but Twitter said it was coming soon.

It means governmental bodies, such as the Department for Health in the UK and the US Department of Homeland Security, will likely soon have the grey tick distinction rather than just a verified blue tick. 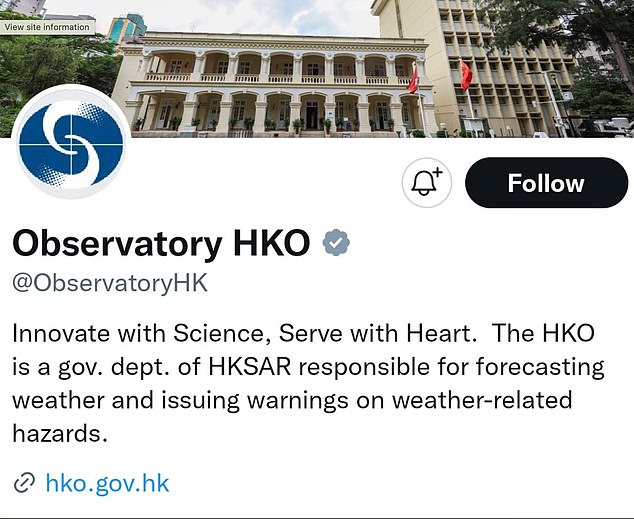 In the same way that blue ticks are for people and gold for businesses, the grey tick will be for government accounts. It means governmental bodies, such as the Department for Health in the UK and the US Department of Homeland Security, will likely soon have the grey tick distinction rather than just a verified blue tick. This shows how it could look for organisations

Many Twitter users have praised the introduction of the various colours, saying it is helpful to see straight away who is a person as opposed to a business, organisation or government account.

Kyle Dunkerley tweeted: ‘Gold ticks for brands, blue ticks for people. I really like the visual distinction. It makes it super easy to see who’s advertising to you.’

In announcing the new verification system, Musk was succinct and to the point, saying: ‘Gold check for companies, grey check for government, blue for individuals (celebrity or not) and all verified accounts will be manually authenticated before check activates.’

Read more about the Twitter CEO’s spat with Tim Cook with this piece on ‘Is Elon Musk declaring war with Apple?’

How your data from more than 70,000 websites is being shared with Twitter through an advertising tool

April 2: Musk announces that he owns 9.2 percent of the company, making him its largest single shareholder.

May 13: Musk says Twitter deal is on hold pending a review of bot accounts.

May 26: Musk is sued by Twitter for stock manipulation during takeover.

July 8:  Musk says he’s backing out of the deal. Twitter sues, trying to force him into seeing it through.

October 4: Musk proposes again to go ahead with the deal at the original price.

October 26: Musk visits Twitter HQ with a sink, updates his bio to ‘Chief Twit’ and sets his location to Twitter HQ.

October 27: Musk is officially made the new owner of Twitter, and tweets ‘the bird is freed’.

November 1: Musk confirms plans to change the system of ‘Blue Tick’ verification on Twitter, for a reduced subscription fee of $8 a month.

November 4: Musk lays off half of Twitter’s workforce as an alleged cost-cutting measure, claiming he had ‘no choice.’

November 11: The Twitter Blue service is paused due to accounts purchasing verification and using it to impersonate brands and public figures.

November 12: Musk fires 80 per cent of Twitter contractors without warning.

November 15: Musk fires employees that posted negatively about him on the business messaging app Slack. The lawsuit between Musk and Twitter is dismissed.

November 16:  Twitter staff are told they need to sign a pledge to be able to stay on in their roles where they would be ‘working long hours at high intensity’ or receive three months of severance pay, resulting in a mass exodus.

November 18: A news-ticker was projected onto Twitter HQ in San Francisco dubbing Musk as a ‘space Karen’, ‘mediocre manchild’ and ‘bankruptcy baby’.

November 23: A Twitter user reported that 5.4 million phone numbers and email addresses leaked on the dark web, before his account was suspended.

November 26: Financial Times revealed that 50 of the platform’s top 100 advertisers have paused their ads.

November 29:  Platformer reported that Twitter is in the process of reinstating around 62,000 banned accounts that each have more than 10,000 followers.